Sous-vide: Best beef steak ever? Or is it?

Today I've prepared one of the best beef steaks I've ever done so far. But there is something fishy going on here, something just doesn't feels right? 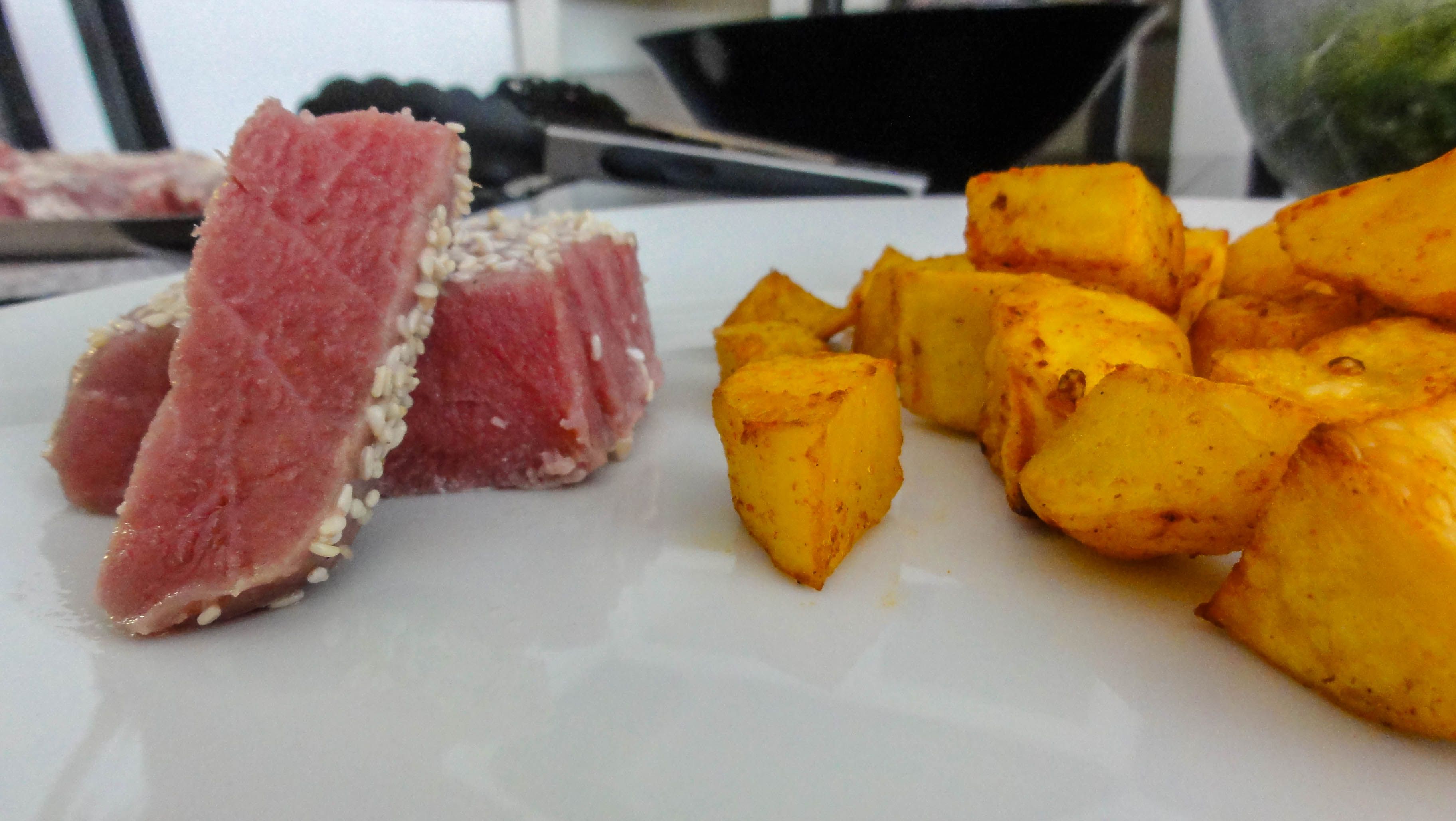 Actually that lovely red piece of "beef" is tuna! =) I was browsing youtube and i saw an amazing #sous-vide recipe for tuna steak that i had to try. So i went to the groceries store and got 2 large tuna steaks. Placed them each in a vacuum sealed bag with some salt, black pepper and couple of lime wedges. Placed it in a warm bath on just 43°C (110°F) for an hour. 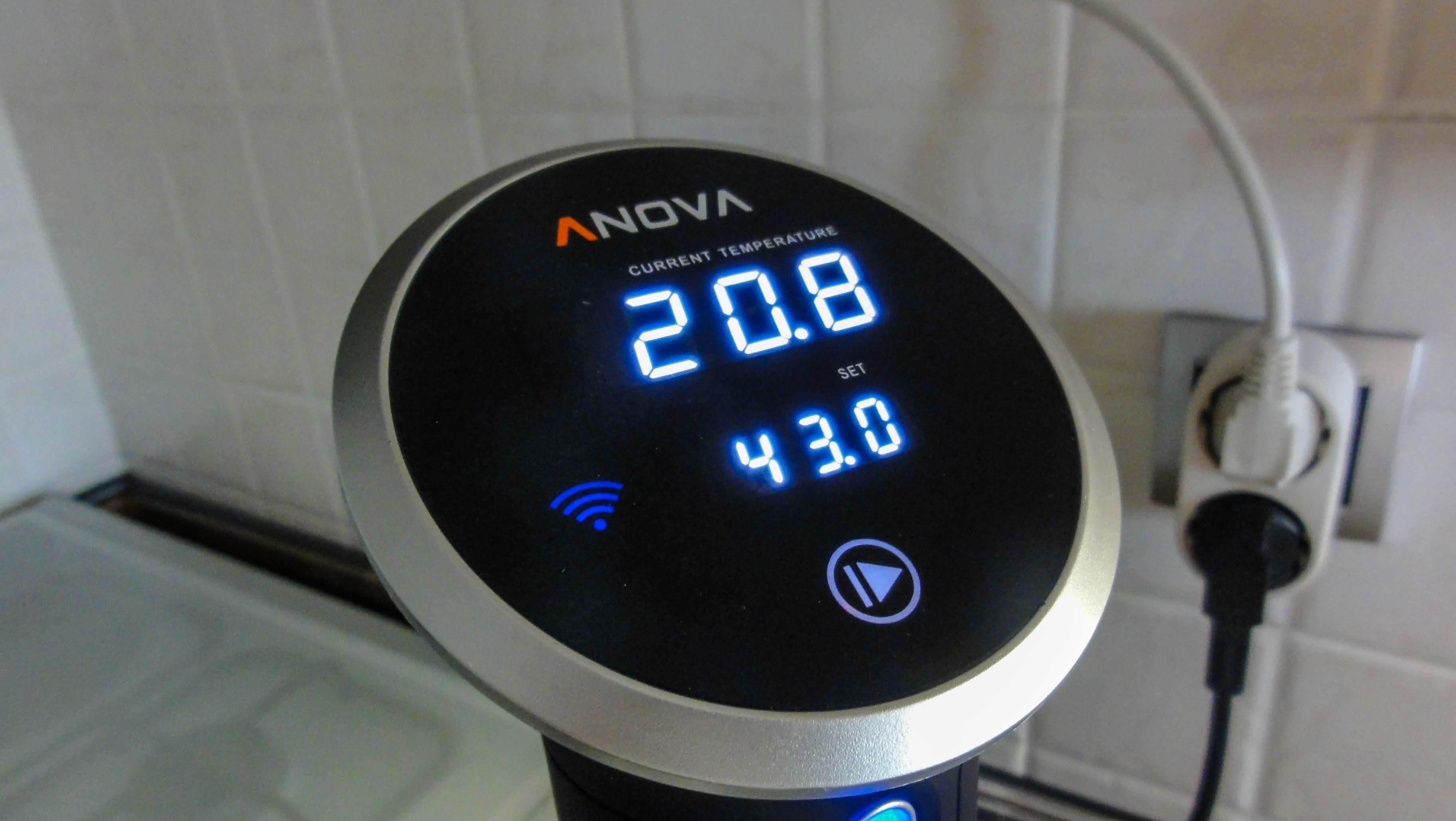 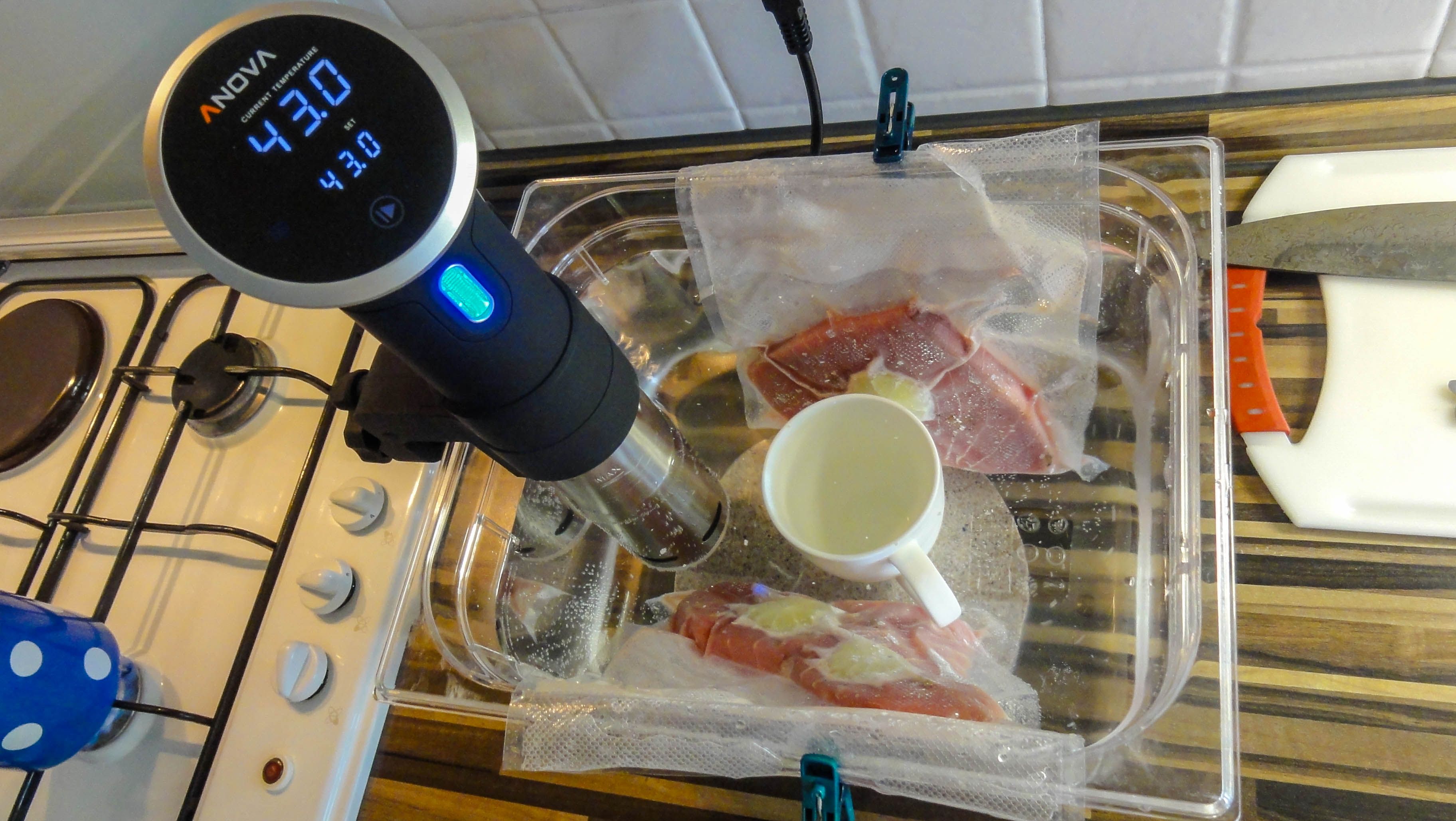 Most of the times, I put a mug inside to stop the steaks from moving in the container

I really wanted to get a juicy and soft tuna steak so i didn't sear it at the end. I've just rolled it in some sesame seeds, to get the moist off and to get even more appealing. I've sliced it and served with some oven baked potatoes and a large bowl of Valerianella locusta with boiled eggs. I had to google that one up. We call it "motovilec" in Slovenia - a much better name in my opinion! :) Sorry forgot to take a closer photo of the salad. 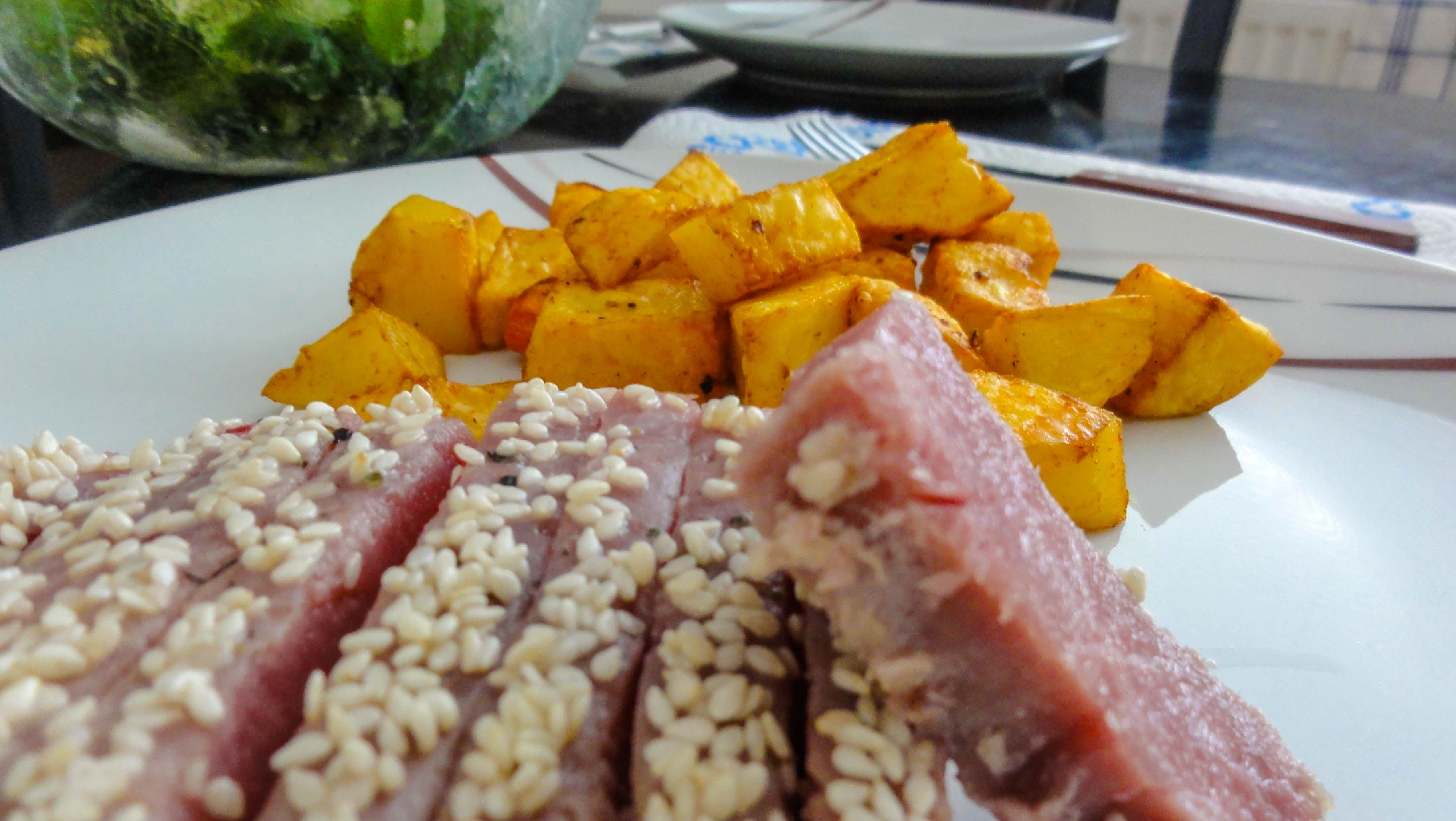 Tender, juicy with a slight taste of the lime Searing this baby would be a shame in my opinion. Tuna steaks can get dry very quickly 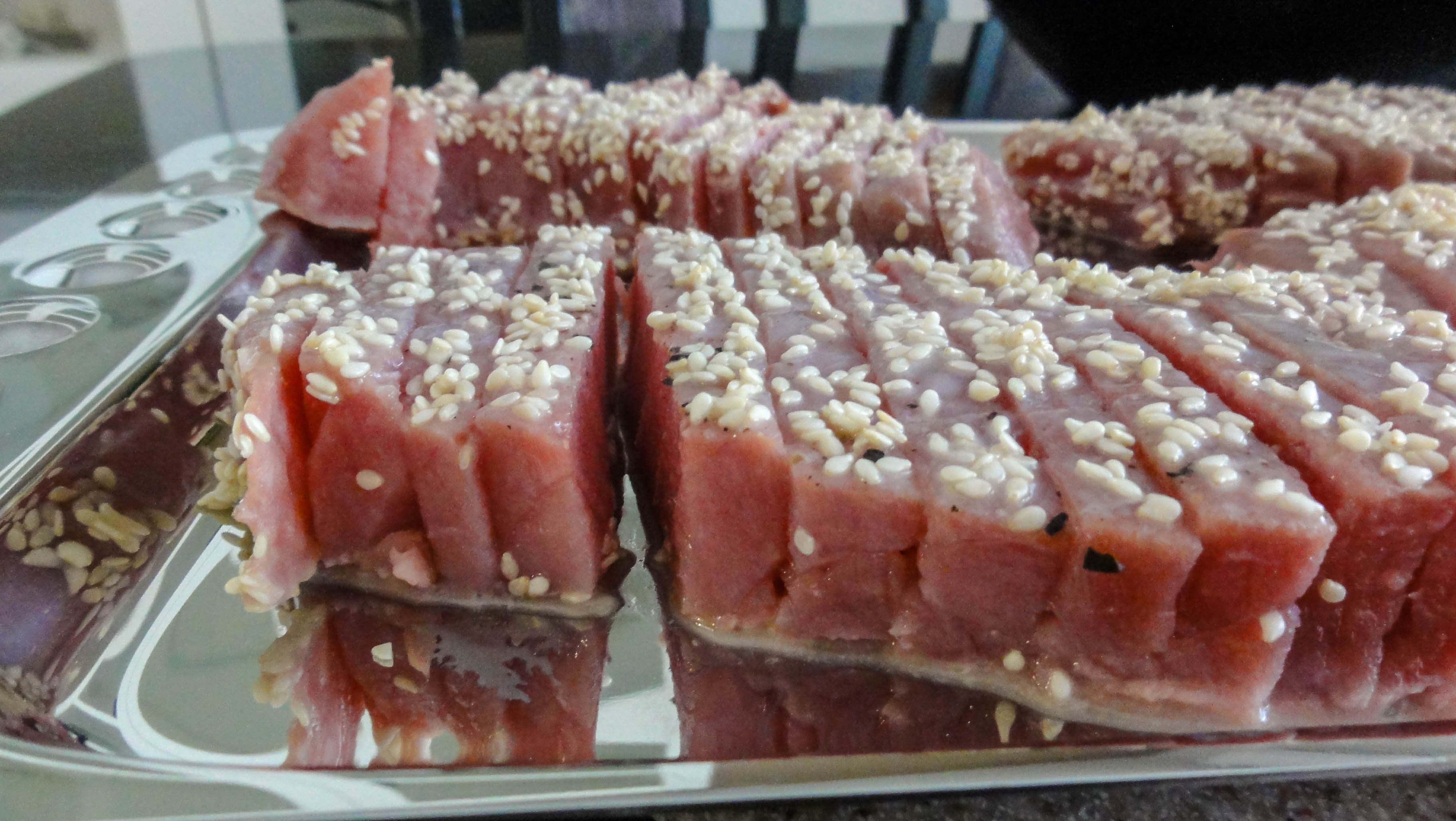 We later found out, that one steak would be enough. Two was an overkill for the two of us eating

It was my first time cooking tuna in sous-vide and it was definitely not the last time. I am not a big tuna fan if i am honest, because every time I've tried it, it was really dry. But this was something completely different. It was like eating a "cooked sushi" fish =) Definitely worth redoing in the future.

I know many of you haven't heard of Sous-Vide cooking before. It's a French technique of cooking at low temperatures for an extended period of time. Instead of searing this tuna steak for 2 minutes, I've cooked it for almost an hour on a really low temperature, just to kill all the bacteria (if any present) but to still keep all the juiciness and tenderness of a fish. It's actually really easy to cook with sous-vide but it does take some preparation and mostly planing. Especially if you are cooking bigger chunks, that sometimes need even 24 or 48 hours of cooking!

If you have any questions about the process or just want to droll on the photos ... go ahead, let me know in the comments bellow! If you know about sous-vide and would like to share your favorite recipe - I'll be more than glad to check it out and try it soon! :)

I learned something new today on steemit. Like every day. Thanks.

I am really glad to share this cooking technique with steemit. With development of simple precision cookers, it became available to everyone. Anova is just a bit over 100€. A really affordable price in my opinion.

I always wanted to try sous-vide cooking but never got to it. I would for sure sear the tuna steak to get a nice crust going nothing much, hot pan, 1 min each side and it would be perfect in my opinion :) great post waiting for the nex sous-vide.

It was a really hard decision for me. I am not used to not sear it, but i must say that i was really satisfied with the result. But a part of me still want to try the seared one, so I'll probably do both next time, to try which is better. But i would do this only with tuna, because it's so gentle in taste and gets dry instantly. I always sear Salmon - skin down of course and it's amazing from Sous-vide. Maybe I'll show that one in my next post in the future :)

I sure it was great with the sesame seed and all. I saw so many recipes on youtube for the sous-vide even a whole pig sous-vide and than spit-roasted. I wanted to ask if the sous-vide apparatus was expensive?

I bought Anova and with shipping it was around 140€ around a year ago. If i saw it correctly it's even cheaper now. Only around 100€ for bluetooth and 110 for wi-fi version (wi-fi version has a bit stronger heater as well, so i would recommend this one).

All i bought beside it was a large food grade plastic container for 10€. And in the beginning you can even start with simple zip-lock bags if you don't own a vacuuming machine.

Thank god it's lunch time?! :D Seeing these photos made me hungry as well :P

I know this anova. It is great for this money. Original is expensive as f****. Well even only bags for this aren't cheap. But it is worth it! Great you have it! When I am back you can show me in practice. He he :)

Well i thought the same, but it's not that expensive. If you catch a sale or some discount coupon, you can buy a large bundle for a bit over 10€. I have that pack for few months now, and i am not even at half. And i don't use it just for sous-vide.

Anova is currently the best price/performance you can get for home cooking. And it's easy to put it in a closet, when you don't need it.

We are all used to caned tuna. Sorry but it's another world :D Eating sous-vide or raw tuna (in sushi for an example) makes you wonder what in the earth are they putting in those cans? :D

Ohhh.. It looks amazing.. I love fish in all cooking ways !
btw. you didn´t tell us that you are masterchef ;)

Every detail in the process very nice explained, it must be tasty with all love you showed in prepering.

Thanks man, it was tasty.

Beef all the way :D

Wao. This is yummy

Looks tasty I have to try it :)

There are more and more restaurants serving sous-vide dishes. Maybe it's the next big thing after the burger-mania :)

Thank you for participating in #foodphotography

You have earned 5.15 XP for sharing your photo!

I have no idea what you just said =)