Steem Has 1 Million Accounts! Here's Why 100 Million Isn't Far Away!

For those who don't know, Steem is a blockchain and Cryptocurrency (like Bitcoin) with a crucial difference - it has built-in support for social network features - which means that you can make posts on any Steem enabled website and get paid rewards for your activity with Steem Cryptocurrency Tokens! I've been using it actively for about 15 months and it has changed my life for the better.. Here's why...

Explaining the genius behind the Steem eco-system will involve a lengthy journey that spans technology, history, economics, politics, philosophy and psychology to name only a few of the relevant factors that have combined to create this evolutionary story - but what has evolved?

The truth is that Steem (and it's primary website - steemit.com) represent an evolution in not only technology, but also money, human interaction and society itself. How is this possible? The ever accelerating change in thinking and human society means that the more time passes, the more tools we have to build more tools to build more tools! In the last few years several key tools have been combined to create realities that were completely impossible before. By decentralising what were previously highly centralised processes, such as money creation and banking - plus adding in relatively new things such as social networking and high speed mobile/personal communication devices, we now have a situation where the shackles have been removed from being rewarded for our own creativity.

Now, instead of having a quick inspired thought of genus as you walk down the road that then gets lost as other things in life distract you - you can instead quickly record a voice memo, then type it up into a post on steem and in moments potentially hundreds of thousands of people will not only share your moment of inspiration, but will be in a position to reward you financially too! Now there's no delay or complexity in being rewarded for creativity - it is instant!

This has all been made possible by a clever method of 'token creation' or 'coin minting' if you prefer. Every day new Steem tokens are created and they are divided up by all of the people who post on the Steem blockchain and who receive votes for their hard work. The more that people want to buy the tokens in the real world on digital exchanges, the higher the price goes and since Steem is a truly evolutionary project, there is a growing demand for the tokens and so the price does indeed tend to increase - resulting in what tends to be ever better payouts for the system's users (there are no guarantees here of course).

The liberating effect this is having in the lives of large numbers of people may be quite unprecedented. It is one thing to have high intelligence or a great physical body or great ideas, but it is often another to convert that into a way to be supported in life. Steem allows us to come together outside of political constraints and artificial borders - unifying and supporting each other in our passions - to become more of who we are, while enjoying life more AND creatively solving problems. It is a powerful mix of elements that combine to create a system that is much more than the sum of it's parts. In a way, Steem represents a technological reflection of a spiritual state of freedom and free will - which is, the way Earth has always been intended to be!

I can go on and on about Steem for hours, where it is going - who is on here - the many apps that are available (including a youtube replacement called D.tube and other more novel ideas) - but really you have to just dive in and get involved; there are many here who will help you out. Make a post, get connected and figure out how to grow your presence.

In short, Steem reigns supreme in the world of social networking for those who intend to help society and grow in beneficial ways. To succeed you just need to stay focused, learn the system and be yourself!

Steem is still in beta! This means that it is still being heavily improved behind the scenes and is not even running at 'full mainstream' capacity - yet it has fluctuated between being in the top 5 of all cryptocurrencies (market cap) and around it's current position in the area of #30 in the world. The system has gone from nothing to being very impressive in around 2 years and it is highly likely that in the next year enough technology challenges will have been overcome that the userbase explodes from 1 million accounts to maybe a factor of 10 or even 100 times more! There is no real reason for this architecture and new reality to fail to replace the stagnating top-down control driven hierarchic systems of Fakebooc, Pootube and Gurgle+... After all, why would you give all your hard work to soul-less corporations who then feed from your feed and get rich from your own creativity - while paying you almost nothing and not even respecting your free speech? You would only do that if you had no alternative, but now you do!

This post was made to be shared on social media outside of Steemit to let the world know how much fun it could be having it just put down the old networks for a while and played around with us instead. It's ok, we don't bite - much! (Please share this with your friends on social networks and see how quickly you can build a productive and lucrative family unit on the Steem blockchain) - To your success! The first 1 million is the hardest to get. The next 99 million is gravy. Looking forward to the updates coming out to take us there.

Absolutely - 'network effect' will take over at some point :)

It's not easy especially registering and approving accounts . Kudos also to @promo-steem Ambassadors and projects.
It's your blockchain entertainer @michaelcj from @steemcamp project

Account creation has been one of the biggest blockages - at least now they advertise that accounts can be purchased on the signup screen. I think the next hard fork is intended to address these issues. We shall see.

Will the Hardfork be the same time with SMT? Or coming soon asap

I don't know for sure, but I think SMTs will be some time afterwards.

OK thanks for your reply

but now I see they should just do it all at once!

But first they will just do HF20 and you will se HF20 with appbase released to give foundationt o release hivem,idn and c0ommunities

I don't see how they're gonan do communities without HF20! They need Hardfork 20 to get communities working! Haha

and tHGEN SMTs later!
So first HF20 and appbase then communities AFTER That so HF20 will satisfy us and then Communities and now SMTs in fall!

Wow. Well explained. Thanks for dropping by

What would that do to the Steem (Power) price? I mean we see Steem growing, but the rate as which the price of Steem moves does not seem to be linked with the number of accounts on Steemit?

The price of Steem fluctuates in relation to the supply and demand for it. More accounts means more potential buyers for steem and more minds thinking of ways to use it and integrate it into our commercial systems (so more demand). Ultimately, the price depends on the creativity and actions of everyone involved.

Yey. So blessed to be part of the pioneers! This is a very promising update! Sharing it on my fb..

It’s crazy to think Steemit is still in beta as you describe it. I can’t wait to see it go ‘Mainstream’. We are pioneers and we should take time to appreciate that fact.

I've been using, and recommending steemit for a while now, but I also need to start learning more about the inner workings, and constant innovations on top of the platform. Luckily, I've stumbled upon many users, such as yourself, that post loads of useful information faster than I can read it! I need to start being creative on this amazing blockchain!

Both figures are relevant, since users can return at any time. Steem Ocean shows that there is an average of around 84000 accounts voting each week.

10% is showing that most of users quit for good and that Steemit design is not working for most of people. Don't want to say it's all about how Steemit is set up, but that is key factor probably.

I am guessing that many accounts are created by existing users for various reasons (I have at least 5 and only use 1). Going by the fact that a high percentage of traffic on FB and Pootube are basically mindless trolls, it is likely that the reputation system has caused a high percentage of users to just leave because they can't keep up with the 'proof of brain' requirements (no-one is really wanting to upvote trolls here much). I'm sure you are right that a lot of people also just don't like steemit - I left too but returned because I like a challenge!

Lot of reasons Steemit is way it is. I think you know pretty much them all.

Anyway, I would write a lot of those kind of articles here, but I have little fear that article will be lost in sea of new posts. After few of those unnoticed articles, it's easy to give up from Steemit. That is reason most of people who are willing to make effort to write in depth articles give up after few unnoticed articles. Steemit is very unorganized, newcomers don't have support and they are depended on luck if some whale notice their article. That is not way Steemit gonna keep platform active with quality content.

If Steemit don't change some things, there will be always less then 10% active accounts. Maybe Hivemind or SMT will change some things. Saw @v4vapid started his initiative. Some good things coming, we will see how will that all go...

I suggest connecting with @tribesteemup - they are upvoting anarchy/peace/evolution content and have some good support for that.

Ok, thanks! If I was newcomer there is no way I could know about @tribesteemup or anyone who can give me support here. Very poor organization.

Well, that's anarchy! lol
I think tribesteemup has only very recently gained momentum, I only learned about it a few days ago.

I heard a great man say your business booms when your customers become your marketers.
We have benefited from the blockchain we are spreading the news.

Nice post. I'm extremely humbled to be part of the first 1 million on Steemit. Together, we'll make this platform a better place.

Yeah my friend. I totally agree with you. The more the people the more chances of investment and the better the platform grows . 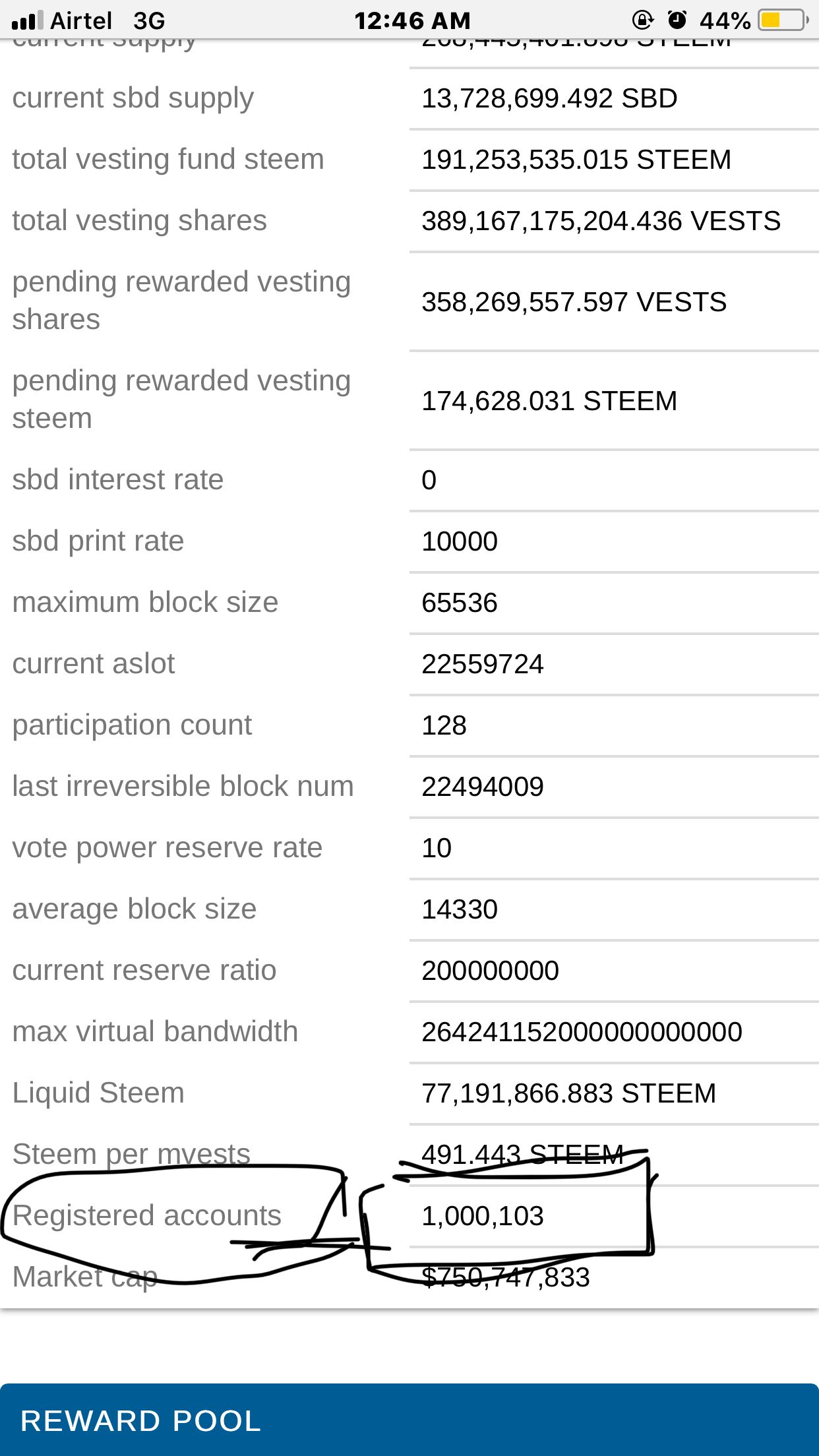 We got so much information in this post.
thanks

Those are very reasonable speculation. 1 million down, 99 more to go.

happy to in the first one million, so you feel as if you are one of people who biult it up