The Stranger Story of Bitch Woman

This time I extend lunch time in the cafeteria. I let my friends leave the table with messy plates. Every now and then may retreat Zuhr time, I thought. Sometimes Firman and Lukman, my divisive friends, began to start lighting a second cigarette after the last punch.

That's when a fragrant woman came to my desk with two ice chests in hand. The woman with oval face sat in front of me almost without asking permission except with her smile.

"This is your favorite, is not it?" She held out her right hand to me.

Between stunned and indecisive, I accepted the ice podeng with a melted chocolate milk.

"Harum." Her mouth closed when mention the end of her name.

"In a few days I see you always order ice podeng. I noticed from there." Harum pointed toward the table in the corner with her chin. My eyes followed. Not far from ice podeng seller and fried fried chicken outlets.

I quickly remember. Have I seen Harum before today? Called a row of shadows with different shades of color, it seemed the woman was sitting there. Alone or with others? I’m not sure. Some days, my heart is restless and furious. The mixture of feelings gave birth to sadness. I lost my spirit of work.

"What's your problem? I heard a glimpse of your conversation. Of course not completely I know," said Harum softly like a mother.

I guess Harum's age is not far behind me. Precisely not older than my wife. But honestly I admit, he is more charming than the women who are in my house. There is an effort to highlight the shape of the breast with the size of the blouse is reduced each one inch on each side. Her fingers, which lie between two dirty dishes, look so beautiful. It frankly caused the pounding. 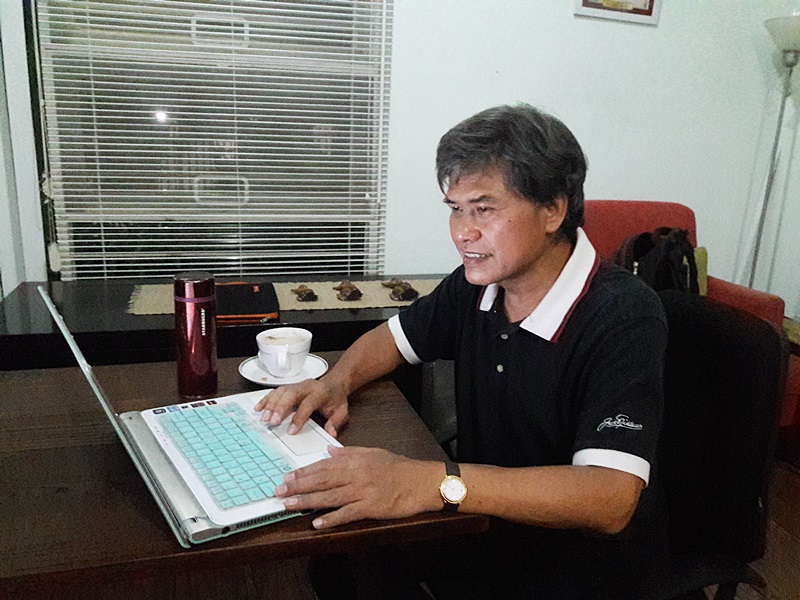 "Sorry, that's none of your business," I said slowly. "We just met each other. Just know each other's name.”

"You overheard our conversation?" I was startled and offended.

"Yes, but these words are useless without any explanation of the relationship," Harum smiled.

"So what do you mean to meet me with ice podeng as gratification?" Although still slowly, the tone of my voice rose. I regret cause I did not join my friends up to the 7th floor on time.

"Do not take it wrong. I told you, maybe there's a problem that makes you look wrinkled. Who knows, as your new friend I can help."

I used to fantasize about fairies who came to help, when faced with difficult schoolwork or always losing to marbles.

"Sorry, I have to work again."

"Ardian!" Harum stood up faster. "It's not good to leave unfinished talk. Maybe I'm not polite to interfere with your business, let alone just know each other. But ... do I look unbelievable?"

When I looked into her eyes, she did not turn. Her views were provided to convince me. She was so clever to make her eyes into a pair of lake and I feel comfortable soaking there.

"I do not want to add to the problem. The one thing I'm facing just this makes me want to get out of the company."

"It's good to tell people who never taunted you. One is me." Harum's fingers gently touched the back of my hand. Somehow, the real cold comes from a glass of ice podeng come to reassure my feelings.

"I have to go in, it's half an hour." I tried to avoid. "Thank you for sympathizing. Also the ice podeng. I brought it inside. "

Harum not forcing, just hoping. "I want us to meet again. Maybe I can help you." The woman gives me a business card. "Do not look at his company, gone bankrupt. My number is there. I'm waiting for your call. "

We split up. Harum sat back. Maybe spend her ice podeng.

Should I tell my problem to Harum? I'm daydreaming as I enter the elevator. A bad coincidence, in that narrow box I met Mr. Hebron, the Human Resources Director who was at the root of my problem.

A pianist ends the music that accompanies the singer with a clear voice. There was light applause from some tables. The black-clad women who recently completed the song Oddie Agam announced that visitors can donate songs.

"So your promotion threatened to fail? Muted to another place that makes you have to learn again?" Harum asked, as if to summarize my story.

"It's all because of my negligence. I trust the dealer too much, because I assume they will always keep their promises. Several procedures often I violate, for the sake of customers in distant islands that quickly receive their order car. Administration on the way. But yes ... there is a corporate policy that is subject to local regulations and a conflict that culminates in suspecting me," I said heavily. It built a dark wall in front of me. Even my favorite coffee did not to clear my mind.

"This question may seem strange," Harum said, waiting for me to look at hers intently. "Did Mr. Hebron know your wife or have met? Maybe in an office gathering."

I shook my head quickly. "My wife is hard to get along with. Even family day never attracted him. He chose the ticket given to our nephew."

"Then call me in your office, especially if Mr. Hebron is there." Harum smiled.

"Make me your wife."

"Not in the real sense, Ardian. Recommend me as your wife. Then let me play."

"No." I refused. Though it did not occur to Harum's purpose, I was sniffing this dangerous plan.

"I'm serious about helping you. Although it means it also helps me." Harum wiped her lips, not to remove the thin lipstick that coats. She knows how to dress up without losing her natural beauty.

I like washing my face with both hands. "It's good we do not see each other again. I'm relieved to be long and honest."

"Don’t forget, at the beginning you said it was time to put everything on the line. You've been working for fifteen years, you have to get something that has been long expected. One more thing, even getting out of the company is also a possibility of your choice."

"Let me find information about Mr. Hebron. In the next week, whatever his agenda."

The luxury hotel auditorium was dominated by scarlet color. The most elegant nuance for a great event. The company has sold one million units of elegant SUV cars since 8 years ago. On the side of the stage, standing Harum as a show host with maroon clothes. Her hair was tucked high, revealing her marble neck.

I still keep whatshapp submissions from Mr. Hebron. "Ardian, your wife has potential. If it's a success tonight, it will be a subscription to our events."

I did not get transferred, even my promotion continued. I lead a section that makes my signature into a collection of subscribers, important in vehicle documents.

At first Mr. Hebron always excused himself through a short message, each time requiring the services of Harum. Gradually a lot is hidden, but I know. To me it does not matter, as long as Harum tells me to keep our relationship secret.

"Ardian, I have to save," Harum said one night. "I leave this out. Who knows I need one day."

As soon as Harum sends photos and videos through the device, I'm surprised. If Harum was really my wife, I would have killed that night after I saw her hot-bed scene with Mr. Hebron at the hotel.

It's been almost a year since my career has improved. I would also like to express my special thanks to the goddess of help. Mr. Hebron paid much attention to me, visible from several policies that secured my position in the office. While I and Harum do not need to often meet except on activities that require a play.

After the coronation of the best national dealer, it seems the party is too exciting. There were bottles of sake on the VVIP table. Harum tasted with the Japanese top brass, but she was forced to excuse herself by staggering. In that night, my shoulders became a leaning place to guide hers walking out of the grand ball room. Mr. Hebron looked disappointed, but covered it with formal attitudes. He offered the driver to drive home. I show the car keys in my hand.
Rain washes the sky all the way to Harum's house.

"Just look in google map. My head is really heavy," Harum said, handing me a map on the phone. A cup of coffee - photograph by Kef

"Good morning, Harum." I said my greeting in front of the opened door. With a thin slab, Harum looks like an angel in my eyes.

"You should never take me home, at anyway," Harum said regretfully. "Before I change my mind, you better go home and forget me."

I was surprised by her serious words. My face is heating up. Cooperation without this contract whether it should not end with friendship? As a man, I have pride. I was about to turn around when a call came from inside the wooden house.

"Who's the guest, Mom?" The question was followed by three heads that had a different height beside Harum. Scramble the place in the opened door.

A girl and two boys. In my estimation, they were eight, six, and four years old. The round-faced woman was probably the eldest. The other two are different from each other. The middle-skinned and light-nosed indo nose, while the small face-faced with narrow eyes.

"Are you a nanny?" I asked curiously.

"They're my son. Born from my womb," answered Harum coldly.

"Come on, Mom, we have breakfast," said the Indo.

A pair of Harum's arms embraced the three children bringing in. Letting myself stand at the door. I remember a week ago, Harum told me when I got home because it was raining and the show ended at midnight.

Half drunk, Harum said she already had three children. "From three men."

Harum pleaded guilty to have captivated her uncle while still in high school, so one night handed over her continuing virginity with expulsion. "Auntie cursed me as a bitch who did not know how to be lucky. I have no face to go home to my parents. Since I was young, I wandered away."

Harum's second child was bloody Italian. "I'm not taking him from his wife far away in Turin. We are not married. I need his sperm. How the company blunder has put me in an offshore office. Marco says I'm Asia's warmest girl. Oily, hahaha. Not even nine months of my birth, she returned to Italy, out of contract. Hm, from birth Luigi is as handsome as his father."

I did not respond to her racket. I chose to concentrate on driving because the rain was smacking the windshield.

"My youngest ... he's a film producer’s son. Teddy's father died in an accident. I can not possibly claim to be his mistress to his widow who is now moving to Singapore."

Dark and bitter confessions. I remembered at our first meeting at the office canteen. The taste of the ice podeng I still remember, also the touch of Harum's hand that bewitched me. I never knew: what is the motive of Harum's life? Is she really called Harum? Now, on Saturday morning, I was forced to accept her decision to forget each other. The affair is over.

As I stepped out of the narrow terrace of the house, I could still hear a girl's voice. "Mom, why are not our guests invited?"