In last days @randowhale the first bot on platform decided to go to permanent sleep (at least for now) and other big voting bot @bellyrub lost his owner and looks for new hands.

It takes gifts not payments, has around 3 SBD power of vote and works in a proof-of-care system.

You prove to the bot you care and then it upvotes back - FOREVER. Spinbot has digestion which means that .2 SpinCredits disappear each day from your balance. This requires people to continually feed SpinBot but also means Spinbot will continually grow and have bigger and bigger upvotes as time goes on!

Sundays are for everyone! Wednesdays too! Two days a week @spinbot doesn’t care how much you sent it, as long as you fed it enough to be remembered (1 STEEM / SBD).

There is also a referral program but im not sure how it works. Mainly if you send 1 STEEM or SBD for the first time and put @kingscrown in memo im supposed to get something. If anyone wants - try it, i have no idea what outcome it will give. If you do it please write in comments so i will check outcome and let you know :)

Interesting experiment. I just sent 1 SBD with your username in the memo. We'll watch together what happens

I just sent 2 steem and put your name @kingscrown in the comments. Let me know what the kickback is for referral. Thanks for letting us know about it!!

@kingscrown can you share more info on the referrals?

Oh I was asking you! I have received absolutely no benefits from Spinbot to date. When I sent them STEEM I posted your name in the comments to say that you had referred me to see if you would receive any referral benefits. It's sounds like you havnt either? Im thinking Spinbot is not going to work but hey it was worth a couple of my precious STEEM to find out. 😉

Haha I thought I was replying to @kingscrown! Need more coffee

going to try it right away, lets see

AS i can see you have to do it for your friend not for yourself. I did it for you @kingscrown
You do it for me please ill add ya when i deposit again :) looking for more testers!

@MoonBot v.s @spinbot the battle to care is on! :)

The thing to notice is that as more users/deposits join, the ROI gets worse. However, I have seen some profits as I have gotten 3 spin-votes so far for ~3 STEEM inputted.

I'm currently at a profit, hopefully you'll be too.

@bellyrub lost his owner? Where was that announced?

Nope @bellyrub is still mine for the time being.

Undelegated power...I think it's on their blogroll.

What the hell... I'd pay a buck to watch a monkey screw a football- I'll give it a shot!

Im already a part of @spinbot. But i sent 1 Steem last week and haven't received anything yet.

i think you can still try the memo, no idea whats gonna happen then but worth trying. maybe it counts this on each send? who knows

Transfer some of the steem Dollar I had, not much hopefully it will remember me! Gotta love the boys.. now if only I could e smart enough to create one ahaha

Thank for sharing such great info with us

Thanks for this, will definitely try it out

Interesting, I will have to look into to it more

Still no love from the Spinbot 😔

good article bro. I hoop you upvote and following me.

Congratulations @kingscrown, this post is the forth most rewarded post (based on pending payouts) in the last 12 hours written by a Hero account holder (accounts that hold between 10 and 100 Mega Vests). The total number of posts by Hero account holders during this period was 244 and the total pending payments to posts in this category was $2872.19. To see the full list of highest paid posts across all accounts categories, click here.

Thank you for providing information. I will try to do it.

every refferal is 0.25 steem in spinny credits!

This is very interesting....and I didn't know the other bots had left. I need to play catch up I guess! Wish I could find an entire list of bots.

This is why I follow @kingscrown always learning something new. :)

done follow, upvote and commets. Back same to you

When can we expect a response from you good sir @kingscrown?

@kingscrown, thanks for sharing this with us! I like the new spin on this bot. So, it has the perfect name! I just sent in 5 SBD. Let's see what Spinny does! :)

Is there a link to a post on how @bellyrub lost his owner?

Hello everyone i hope everyone kindly helping me upvote my Post and Follow me i'll upvote and Follow you back thank you before Hand everyone have success in steemit
https://steemit.com/ico/@pichreachsey/how-to-make-money-with-the-new-platform-steemit

hi there. i've just sent u 1 sbd 35 min ago and wrote in memo my post's link... instead of @angela.ghkh ... and my post does nt upvote with you, is there a problem? 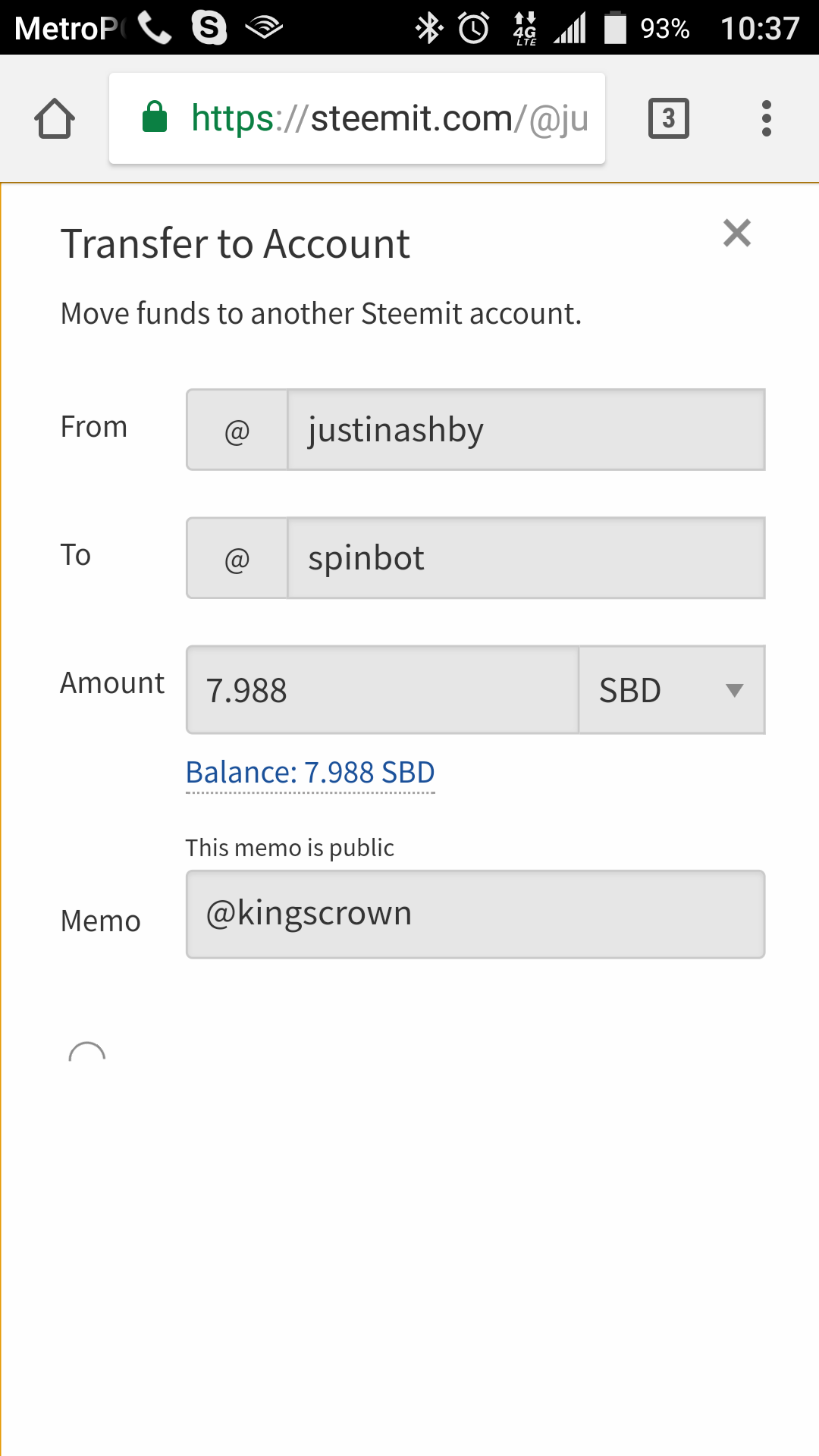