Currently most altcoins are down due to BTC situation lets have a look at the ones that interest us here most - STEEM and SBD. Obviously Bittrex rocks the vol but good to see LiveCoin and HitBTC with spots. Dont think of arbitrage - withdrawal fees there are big. Unless you keep coins at all 3 exchanges and buy and sell without actually moving coins. OpenLedger has some good prices but really low volumes. Thats why i have extended this from just top10. Worth having accounts on all this 4, you never know wheres opportunity.
Mainly STEEM trades below 1 USD now.

So now SBD is less pegged to USD, more pegged to STEEM. Not that bad volume on BTS pair (compared to STEEM). Any idea when alts will begin to rise up again? Any hunches? Just a question

You could expect short wave up after november fork. If bitcoin make another move up then alts would rise on that move correction but from lower levels than now. If bitcoin stays flat than alts will slowly bleed.

I think trading with the steem and other crypto is. Much more profitable theae days. All are at low price of the month i think

Yes but Bitcoin is steadily rising . Which is good.

ya DGB will shoot think so

I'd like to think that one of these days Steem will pick up a bit and stop underperforming a lot of the other alt coins....we have a good thing going here, but it seems like Steem sees very little action that isn't related to Steemit members buying and selling.

It may correct a little after ddos problem is resolved but i wouldnt expect a significant rise. Fundamentals are weak right now. Advice patience and buy walls at 10k sats and lower. 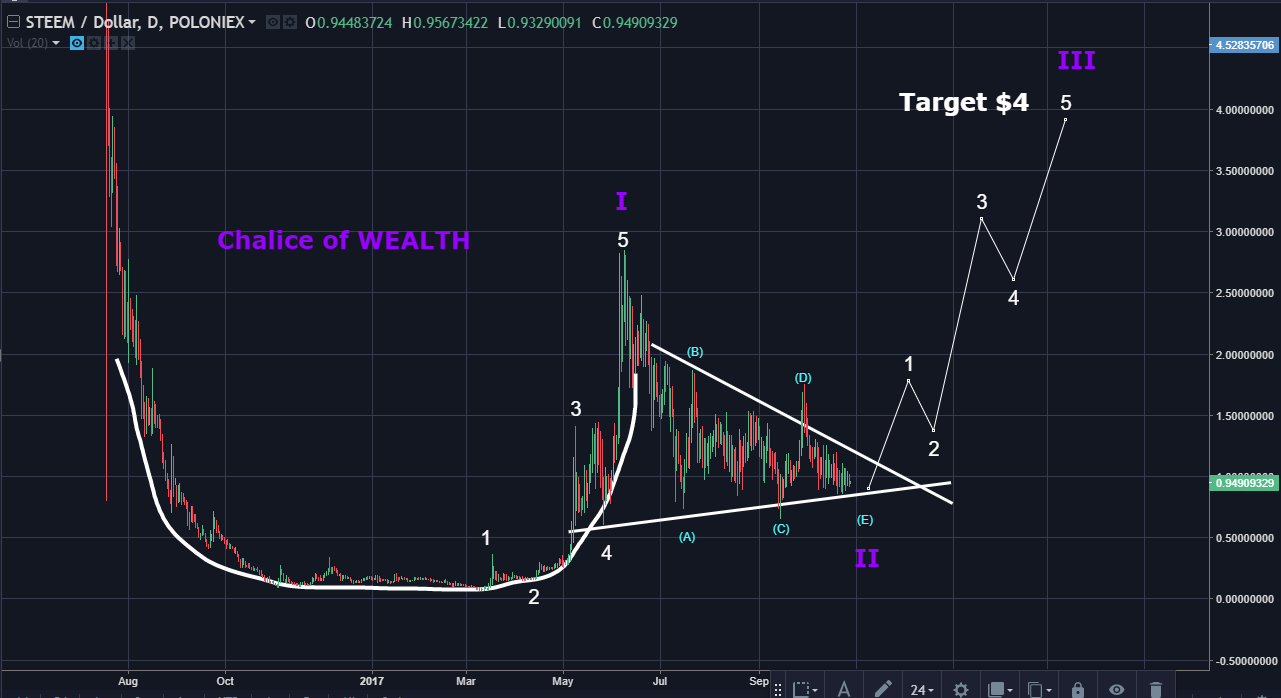 With the recent updates I think it will draw more people in. The new feed page is a lot better now that you can sift through the posts easier.

Care livecoin will stop trade steem soon : "Dear clients, please withdraw STEEM before November 10. This asset will be delisted. Withdrawal and trading will not be available after October 31. Please don't deposit STEEM."

Why are they doing it?

I believe at some point here the action on STEEM will pick up big time. It might be a couple months down the road but I feel this blockchain is going to get a lot of attention. Steemit is just one of the apps on this chain that is really remarkable. When the bugs get worked out, we will have comeptition for FB/Reddit, twitter, youtube, and quora. Of course, the most outstanding part of this is A) it is decentralized and B) there is tokenization which enables people to get paid.

Plus, do not overlook the impact SMTs have.

Sorry for my noob question, but what is an SMT? I keep seeing that acronym but it is never explained. Sorry

They were designed to work on the steem blockchain. Basically they allow any site, whether large or small, to create their own currency to monetize their site. While many of the bigger players have the money and time to do it on their own, many blogs out there do not.

Basically it is taken the curation/posting rewards system (proof of brain) and giving it to anyone who wants it. This all goes on the steem blockchain and, it is expected, many entities will initially purchase steem to give their tokens immediate value.

To me, this is a concept that could really drive a ton of traffic to the steem blockchain and, ultimately, to the other apps on here.

Vice.org recently announced they are using SMT to develop their own token. I wrote an article about this...you might want to check it out. It is the first major entry into the space when you look at who the content creators are.

Ah, thanks for the explanation. Will read your article. It's all beginning to make some sense to me now... I think.

I will help support you
🖖

How can you do arbitrage without moving coins?...

Do those exchanges really take high fees for Withdrawing steem?

It is everyday trand market?

I am not in the least discouraged by a temporary downturn of STEEM. I see the potential in the STEEMIT platform.

Good work! Thanks for the help!

Thanks for the information.

I'm loving this decentralized platform every single day. Steemit is the wave of the future folks.

Why STEEM trades below 1 USD?

Good work - Especially valuable for all us Steemit members

It's fantastic to trade steem and SBD by using the internal market in steemit, without any fee.

good information for all steemit user

Okay another rare time where you're in profit hodling more SBD than STEEM :)

Those market % changes in different exchanges are they all in negative - or mixture of both + and -?

Dont miss this one, its now or never.
https://steemit.com/goldreward/@keronzi9/goldreward-pre-sale-ended-its-now-or-never

Congratulations @kingscrown, this post is the most rewarded post (based on pending payouts) in the last 12 hours written by a Hero account holder (accounts that hold between 10 and 100 Mega Vests). The total number of posts by Hero account holders during this period was 206 and the total pending payments to posts in this category was $2615.59. To see the full list of highest paid posts across all accounts categories, click here.

Thank u so much bro

I just saw a big spike on the internal market ! We should see the steem price rise with the fixation on the lag that was occurring on the website.

Thank you for sharing, it helps a lot.

thank u so much for the information

Good post, I am a photographer, it passes for my blog and sees my content, I hope that it should be of your taste, you have my vote :D greetings

I am always on the side. i already upvoted.. follow me: @akhterhossain

Can you elaborate a bit more why it is good to do the 3,5 day convert between SBD and Steem? And why the normal internal market exchange is better than on exchanges?

Thank you that is useful article and a good suggestion.

Sound great....but currently, bitcoin is getting down

thank you for sharing with us @kingscrown great article

@kingscrown Found you thru other Steemians, will now follow you to get this info first.
Been recording a series of shows on my YT channel on Crypto Currencies. Maybe you are up for an interview to help educate others too? You would be among Stan Larimer and Gerald Celente. Thanks
https://www.youtube.com/playlist?list=PLLaAb3SxuoQdCPdN7QGF2l6tgiLV8XurQ

Trading...so... someone explain to me... what the Trading Market does for the CryptoCurrency Market?

Thanks for your useful information

Great and thanks for sharing this information.

If ya'll want a strong investment with low budget plan visit https://bitpetite.com/?aff=kippa... (bitpetite) Its a bittumbler that privatizes btc transactions using other currencies. You as an investor get paid dividends from fees they charge people to use their service.

They recently updated their server to allow almost instantaneous withdrawals - you get paid hourly through dividends and can withdraw on demand. (within the minimum amount which is less than 5 dollars)

I would deem it low - medium risk as of now -