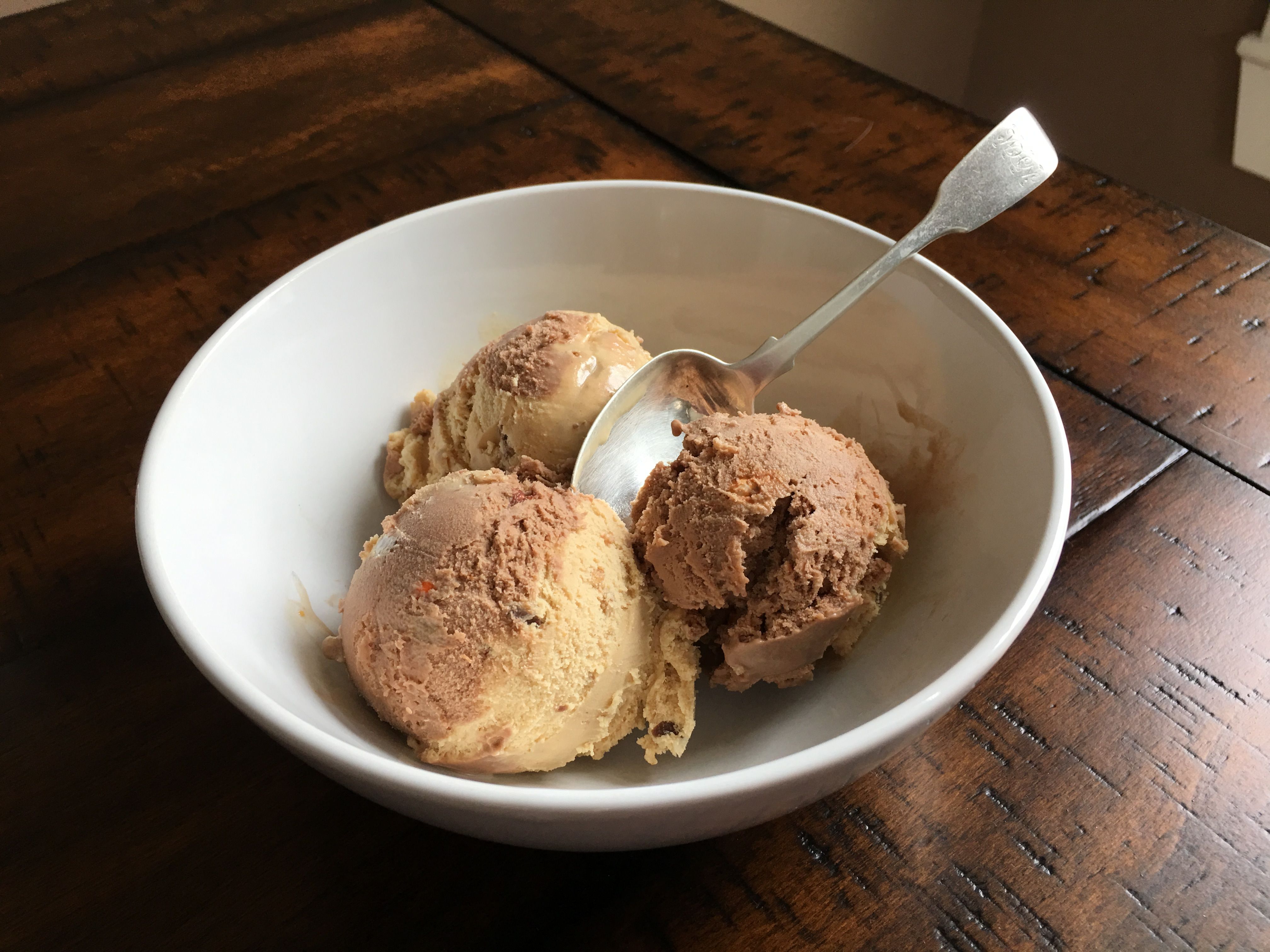 For as long as I can remember ice-cream in my family has been eaten with a silver teaspoon… yes you read that correctly lol, a silver spoon. Let me explain.

For some reason, and I just asked my mum and aunt about this and we’re not sure how it started, when eating ice-cream at my grandparents’ house you would always eat it with a silver teaspoon and it was always vanilla flavored. My grandad would pass them out and then afterwards they would be lovingly washed by hand, counted and put away again – no dishwasher for these babies :)

I can however recall two instances where a spoon was MIA; one I caused and the other my nanna. In the first instance, I was about 8 yrs. old and my grandad had handed them out and then we all got sidetracked doing something else and when it came time to eat ice-cream I couldn’t find my teaspoon and had to confess to losing it. Well, we turned their London flat upside down looking for it… only for me to discover that I’d put it in my jeans pocket… I was not allowed to forget that in a hurry. The second time was when my nanna washed them and pulled the plug and it disappeared down the waste-disposal (garbage disposal) in the sink. Again, the flat was turned upside down and thankfully the waste-disposal hadn’t been turned on or one spoon would’ve been a bit mangled and probably the reason why it was my grandad that washed and counted them…

When they passed away, I inherited the much-coveted silver teaspoons probably because as my mum will say, “I tried to steal one” all those years prior... So, now we have six silver teaspoons and since I just cleaned them, I decided to share their story here. 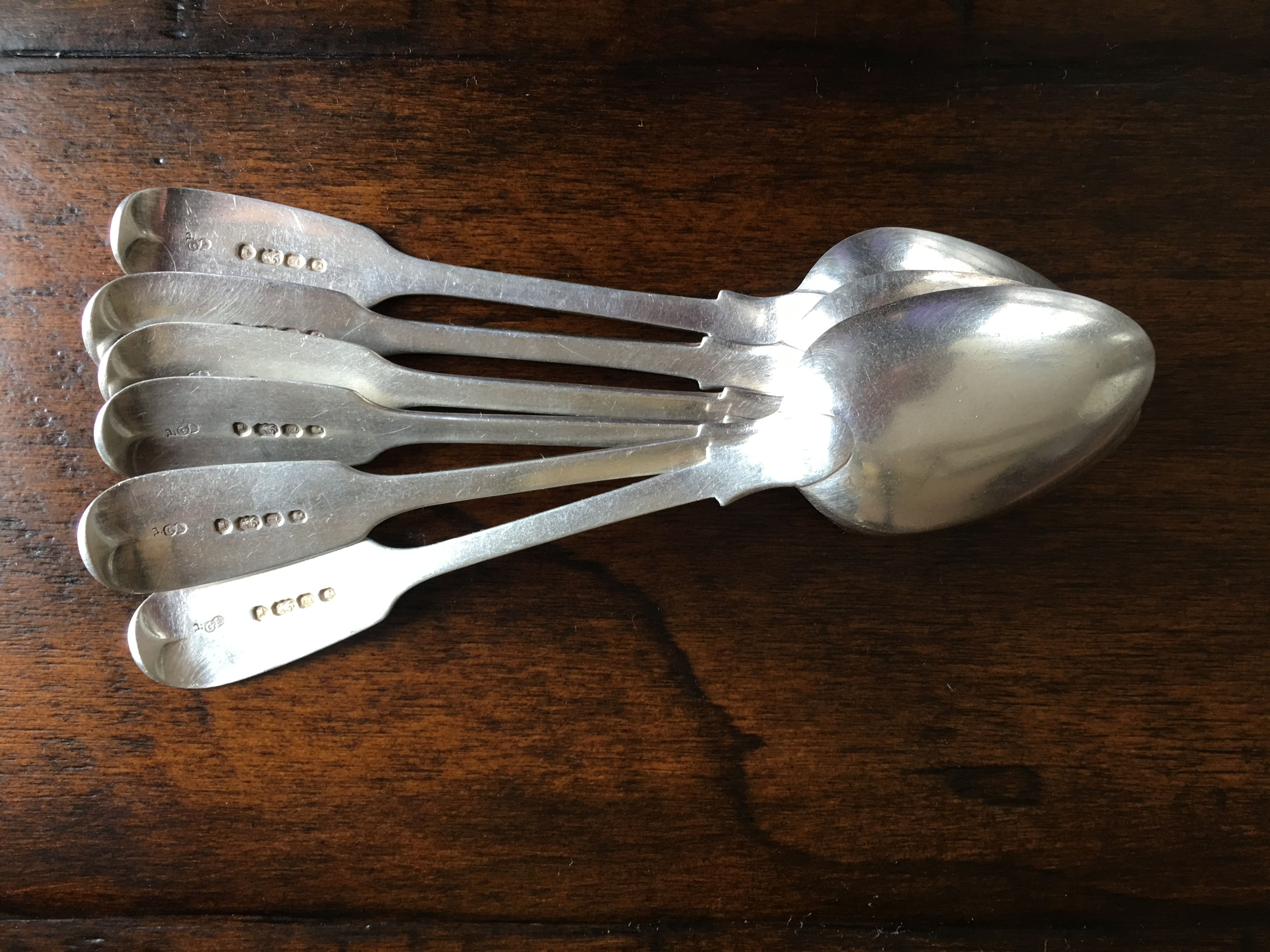 My mum said her parents had them for as long as she can remember and think that maybe they came from Grandad Betts who was my great-grandfather on my Grandad’s side but we’re not sure. There is a monogram on them, “WHN” but this shed no light as to where they came from and so I decided to do a little digging myself.

Now that the tarnish was removed and I could make out the hallmark, I set about trying to find out a something about them. Anyway, here’s the scoop… ice-cream… scoop… get-it…oh well… Thanks to Google and the magnifier on my iPhone, I was able to deduce that they were made in London in 1844.

Town mark, "Panther" which signifies London
Lion passant facing left, to certify the silver quality - .925 purity
The date letter, in this case “I” signifying the year, 1844
And a "Sovereign Head Mark" – Queen Victoria certifying the payment of tax or duty on the weight of the silver

According to the London Assay office, this is the makers mark of Chawner & Co (George William Adams) who were in business from 1840 - 1884 (registered Nov 1840). They made basket, box, caster, creamer, cup, flatware, goblet, knife rest, mug, mustard, salt, sucrier, vesta and was located on Hosier Lane, Smithfield, London. And apparently Chawner & Co was sold to Holland, Aldwinckle & Slater in 1883. So, these 6 teaspoons are some of the earlier ones made by them.

Of course, now I needed to know more about George William Adams…

The business was founded in 1815 by William Chawner II who was apprenticed to William Fearn in 1797.

Free in 1804 he entered his first mark as spoonmaker in 1808 in partnership with William Eley and William Fearn.

The partnership was dissolved c. 1814 and William Chawner II entered his first mark alone in 1815. After his death (1834) the business was continued by his widow Mary (née Burwash).

Later, Mary Chawner took into partnership (1840) her son-in-law George William Adams (husband of her daughter Mary Ann), who, after her retirement (or death) managed the business as Chawner & Co and remained sole partner until 1883.

In this year Chawner & Co was sold to Holland, Aldwinkle & Slater (1883-1922 when the firm was absorbed by Francis Higgins & Son Ltd).

Now his next part is really quite interesting. Chawner was the most important manufacturer of spoons and forks in London and participated in the 1851 Great Exhibition and the 1862 International Exhibition.

Their pattern book (c.1875) is the reference for naming many of the patterns manufactured in the Victorian era. These spoons are the “fiddle” pattern owing to their shape looking like a violin although the design originated in France.

Finally, I had to weigh them… The combined spoons weigh only 4.9 oz and vary only very slightly in individual weight. The melt value isn’t as much as their historical value (around $75 per spoon) and of course no match for their sentimental one. 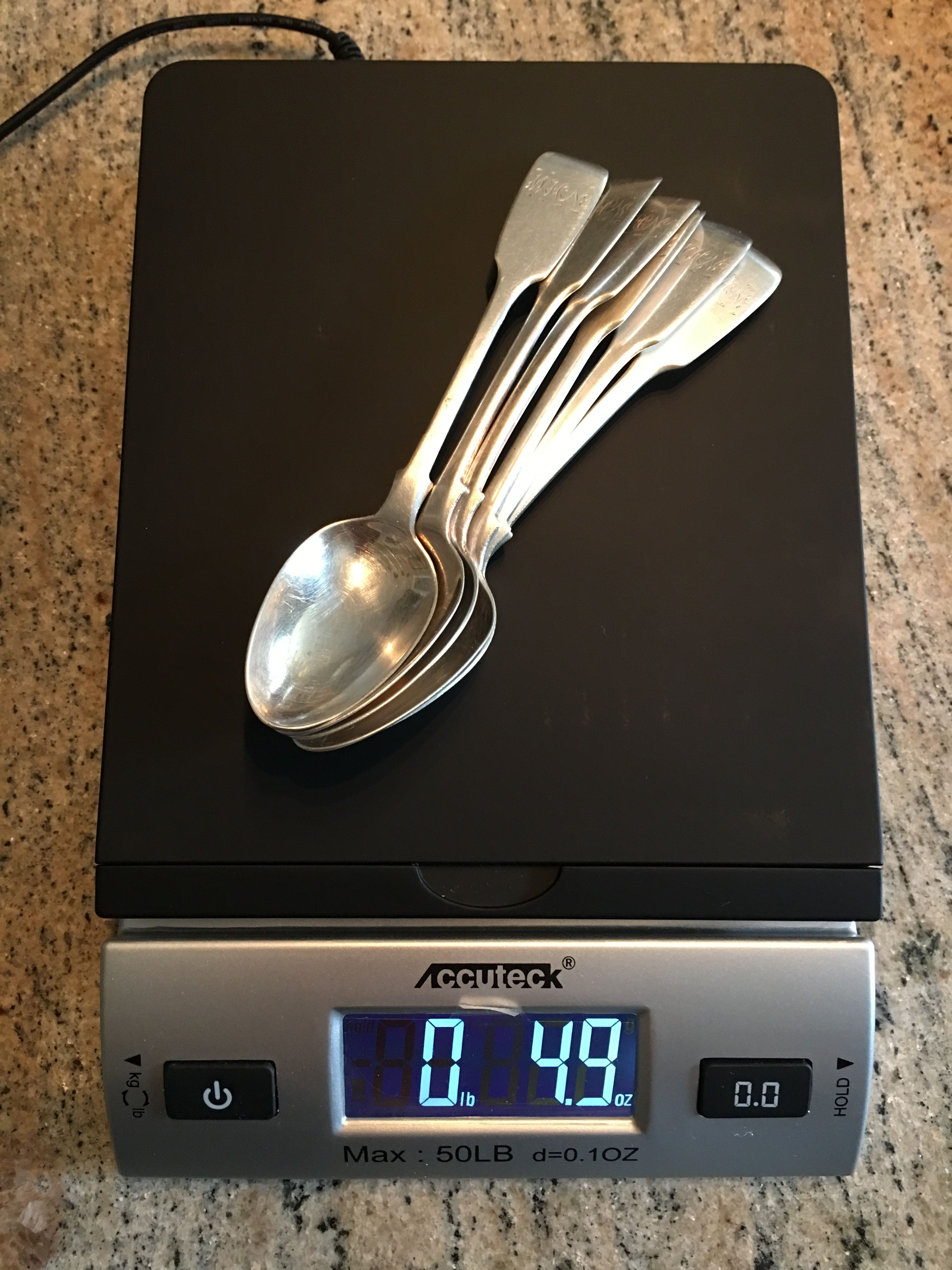 They will continue to be enjoyed and used by us and passed along to one of our minions to do the same.

Anyway, that's the story of my silver spoons and if you made it all the way to the end of this long-winded ramble about teaspoons, and if you're ever in the neighborhood, I'll buy you an ice-cream to be eaten of course, with a silver spoon.

P.S. Maybe the unconscious “pocketing” of the spoon at such a young age was the start of my silver stacking compulsion?

Wow, I love this story! 1844!! I don't own anything that old. That is so cool that you received those...if only those spoons could talk, they'd have some pretty amazing stories to tell. I love to think of what old stuff like that has "seen" in their lifetime. Amazing! Thanks for sharing this super cool story and letting us in on the background. I will definitely let you get me a scoop of ice cream (my favorite) and eat it with a silver spoon if I'm ever in your neck of the woods!!

@apanamamama I was surprised to see how old they were and that the maker was quite famous for his time. And there is a bowl of ice-cream with your name on it... come on over :)

I absolutely don’t mind a lavish life, but what a shame I wasn’t born with a sliver spoon in my mouth. Haha

Any recently acquired jewelry? I still remember that 24k rose gold, really out of this world. Hardly any branded rose gold jewelry is 24k.

I will share with you a book that helps my boy learn basic Chinese characters.

Hi @prch No, nothing to share recently on the jewelry front... but you never know :)

Thats a fine tradition there. I wanna do this too now

@pit-bullion you really should :) It's fun to eat ice-cream with a silver spoon :) Just remember to count them afterwards lol

Great story. Thanks for sharing your special memory and the history behind it. I know that the metal in those spoons has value, but the memories behind them are priceless.