One of the most common questions among #steemsilvergold enthusiasts has been

When is the 2018 Steem Silver Round coming?

The 2018 Steem Silver Round is in the planning stages and we want your input!!

Back around August 2017, I proposed the idea to the community about creating a silver coin. The original post is available here. There was a ton of feedback and we started moving forward with the project. After being torn between a few mints, I was alerted that two Steemians (@phelimint and @ejr) had their own private mint. Their bullion shop is available online at www.phelimint.com, where they have a great selection of small batch coins!

We held a design contest for the reverse side of the coin! There were many incredible entries, but in the end @bearone came out victorious with her "community" design! 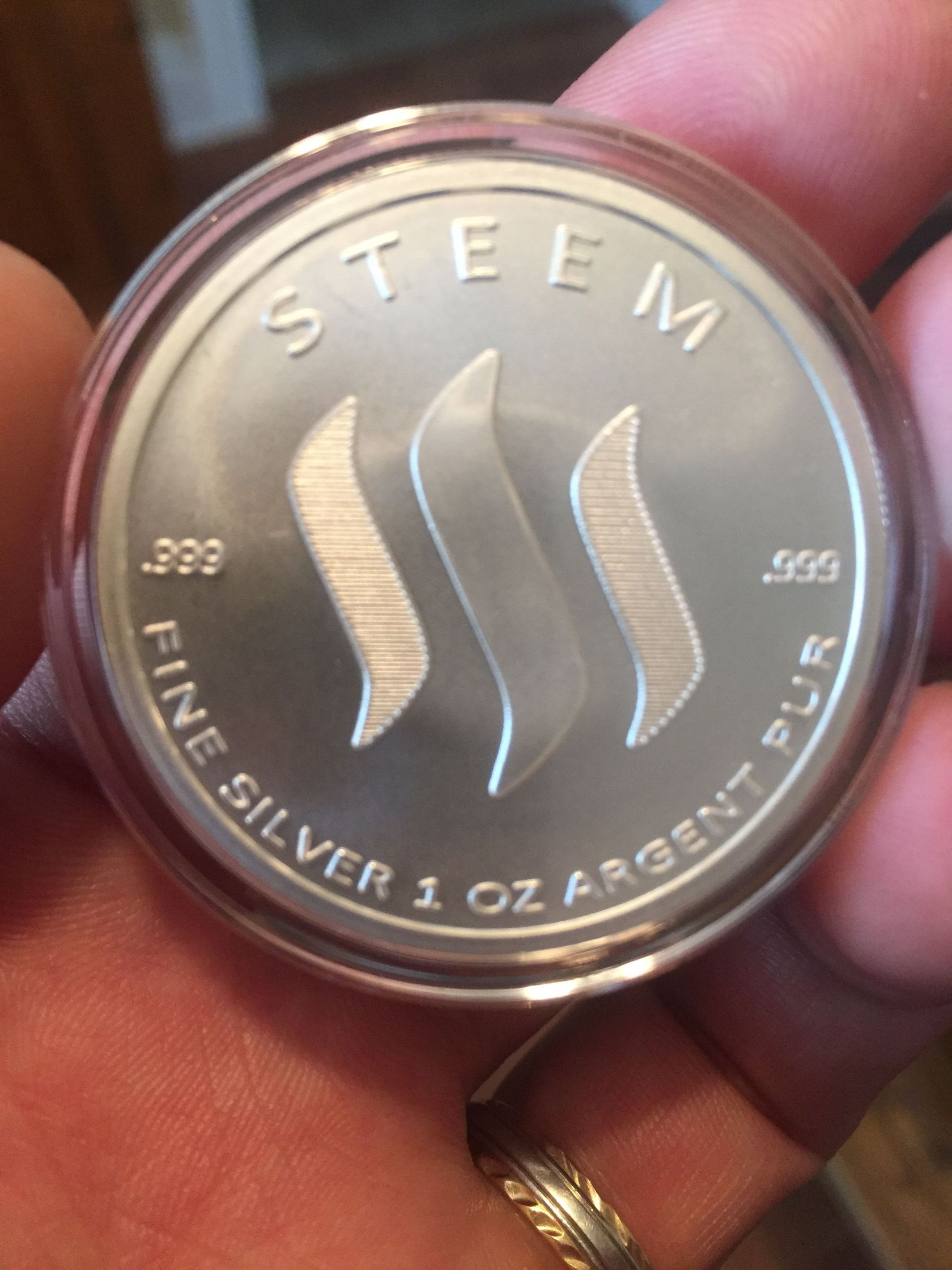 There were only 1,500 coins minted and they were completely sold out before the coins were ever shipped!

Each coin came enclosed in a coin capsule and was individually numbered on the edge with a matching serial number. 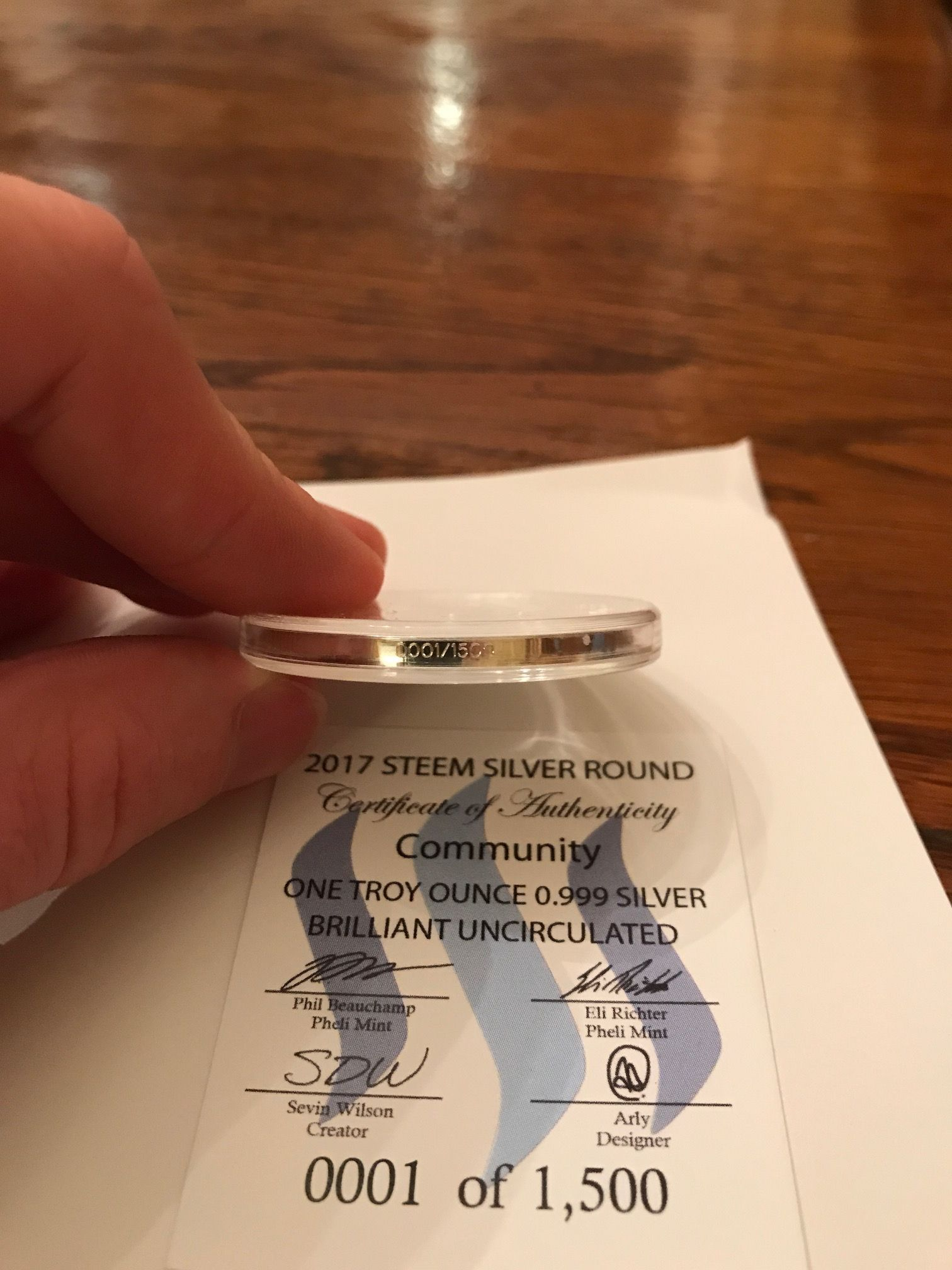 There are still some coins floating around out there on the secondary market of the 2017 variety! I have some available if you are looking for some! You can contact me via Steemit.chat (@sevinwilson) or Discord (Sevinwilson#5606) to order a 2017 Steem Round

Updates/Questions about the 2018 Steem Round

We are still a few weeks out from having the design contest for the reverse side of the coin, but we need your help and suggestions for how we proceed with the 2018 Steem Silver Round.

Details about the Die

As far as the obverse side, we will use the same design as the 2017 Steem Round for the foreseeable future in order to help create some consistency. As you have probably noticed, this is not a Steemit round, but a Steem round as a Steem is open-sourced, while Steemit is its own corporation.

With the 2017 Steem Round both the reverse and obverse sides were 2d designs, but we feel that it would be extra special if we did a 3d die for the reverse side of the coin. When the design contest rolls around there is nothing you will need to do as a designer because the sculptor will create the awesome 3d effects for the coin. In the next few days, @phelimint will go into further detail about the process of how a die gets created!

This is one of the more important decisions that need to be made as it directly correlates to the price of the coin. The original 2017 Silver Steem Round was of the Brilliant Uncirculated (BU) type and came out incredibly well. The price difference is quite large in choosing BU or Proof-like finish as it is on average $5 more per coin for the Proof like finish.

No matter whether we choose the BU or Proof finish, each coin will come with the Certificate of Authenticity (COA) with the matching serial number engraved on the edge and will be enclosed in a coin capsule.

Here is an example of the difference between a BU(left) and Proof (right) in the Temptation of the Succubus from the Phelimint website.

The 2017 Steem Round was the first coin and since it was newer to the community there was a smaller mintage (only 1,500 coins). We were unsure if we would be able to sell all of the coins, but we ended up selling all of them before they were even released. The total mintage is something we wanted some input from the community on as we want everyone that wants some to be able to have some, but we do want to keep it as limited as possible. Our initial thought was somewhere between 2,500 - 5,000 total rounds with it more than likely being towards the higher end in terms of total mintage. Similar to the first round, we do not have to have all of the coins minted all at one time and can release in batches of somewhere between 500 and 1,000 if we do not sell the total mintage number at the beginning.

After discussing with @phelimint, we contemplated creating a maximum order that one could order to the Hunt Brother scenario coming in to play where the market was cornered and it drove the price up. With the first order there were many orders above 60 rounds and some as high as 200 rounds from a single individual. If a cap was set since the total mintage is higher, we were thinking somewhere around the 250 number.

Crowdfunding the Steem Silver Round

I think everyone here has been impressed with what the Steemit community has been to accomplish in not even two years. After talking with @phelimint we thought it would be unheard of to get the price of this coin as close to spot as possible by donating all of the SBD that any posts we make regarding the Steem Round go to a fund that will offset the final price of the coin. With that being said, we have created an account, @steemsilverround, that we will deposit all SBD earnings from posts related to the coin. We encourage others that post and promote the coin to donate the SBD from their posts to @steemsilverround. We have already received a donation from @tzcap!!

There will be a pre-sale at some point for this coin, but do not want to do it too soon as depending on which die we ultimately choose may determine how long it takes until the coins are in hand. A 3d design may take up to 3 months since there are so few sculptors in the world that are qualified to create the molds for the dies. The pre-release will most likely take place between 2-4 weeks from the coins being released. Do not send any payments until the pre-release has begun

If there are any questions about the coin or for more discussion, feel free to comment and we can discuss and see what we can come together and create this year!

Stay tuned for more information over the coming weeks as the design contest will begin before long!

Yeah! It's that time of year again!

I'm sure if we took a pre-order commitment count, the numbers will be staggering.

You very well could be right!! It would not surprise me at all if we ended up getting close 10K! May want to save some silver for the 2019 round! haha

I traded some silver bars for Steem! I bet you someone would pay you 20 Steem for that coin!

That was a good trade! Did you pick any up of the original round??

Can’t wait for this! Great to read the progress.

Absolutely! It’s going to be a lot smoother this year even as more people invest as we learned quite a lot from last year!!

looking forward to that.

You are a saint! We appreciate your kindness and help to grow this project!!!

My thought is to just double the mintage from 1500 to 3000 that allows for more to get in on it without flooding the market. Or maybe first run of 3000 with the option for a second run?

I think an order limit is a good idea. Maybe 200 or less? 250 seems high, especially if mintage is a around 2500, seems a little wild to have 1 person potentially scoop up nearly 10% of the total. Not to mention if they're being partially subsidized by the community in order to make them more affordable, I don't think we want someone buying a truckload just to turn around and flip them right away...

At any rate I very excited and plan on buy at least a few! I'm still kicking myself for only buying 1 last year haha

We are excited too!! That is definitely a thought to just increase to 3,000. That would add some rarity to the coin! If we did 3,000 I think 200 would be the highest for a max number from a specific user! Keep on stacking the fiat and SBD/Steem so you can back up the truck this year!

Great idea! I'll be sending a bit of SBD to that account tomorrow.
Will you be accepting SBD for the actual coin? I'll need to start saving up.
Resteeming this post, and let me know if there's any promo I could help with (unfortunately, my presence on Steemit isn't as large as on YT... Yet.)

Hey man, we really appreciate the contribution. We were able to get out website set up to accept steem payments directly in the site. You would need to exchange your SBD for steem prior to purchasing, only because the scripts still only value SBD at 1USD.

@Phelimint will definitely be accepting Steem and BTC! I am unsure about SBD, but SBD can always be converted to Steem so you will be good to go!!

I will keep you updated! We are always looking for help in different ways especially with promo type stuff!!

I knew you would be intrigued and all for this!!

It would be great if we could buy them with Steem or SBD, especially if we have months to save up n HODL it all for stacks of Steem coin

You can even auction some of the better numbers off, like 222 777 and the such.

You will be able to buy the coins with Steem! The integration is already in place!! SBD is a little tougher because it is supposed to be pegged 1:1 with the USD. But you can always convert your SBD to Steem!!

Yes those definitely go as a premium compared to regular coins on the secondary market! Some people are selling the 2017 version for Steem/SBD still!

This will be awesome. Hoping I can get in on it this year.

I just got my first one from @phelimint. He sold a few on his shop. Bought it with steem.

Okay good! I am glad you were able to snag some!!

Yes! I think it is a great idea to increase the number, cap purchases and raise money with posts to bring the price down toward spot. Would a silvergoldbotty reverse be too finite?

It’s defiitely an idea to include silvergoldbotty!!

Hopefully this steem coin can grow even better in 2018

Wow , this is the first time ive seen any crypto coin.... This looka legit... @sevinwilson Nice work with whole peice of knowledge... Time consuming but pays off at the end...Thumbs up to you

Thank you! It is a lot of work, but it’s worth it for sure

any plans for gold?

In the future possibly! Would you be interested in one?

Excited about the 2018 round. It was fun watching the 2017 round come to reality, this year will be fun too! @ironshield

nice to know about this. if suppose, I were to buy one from India, the shipping charges would exceed the product charge?

That is why you need to buy multiple ones!! :D

@sevinwilson, I am interested in getting some of the 2017 and 2018 Steem silver rounds, how much above spot are they?

The 2018 coins aren't available yet for purchase, but the 2017 ones are only on the secondary market. They are going for about $60 on the market!

I have a few! Do you have discord or Steemit.chat?