These posts are not for foraging. They are intended for entertainment and intellectual satisfaction only. These posts are not a field guide nor comprehensive in any way - their accuracy is not assured in any way. Do not eat wild mushrooms unless you are a professional, have substantial professional assistance or have a wealth of personal experience with a specific species. Do not make any foraging decisions based on these posts. To do so could be dangerous or life threatening.

This post does not include edibility or toxicity information 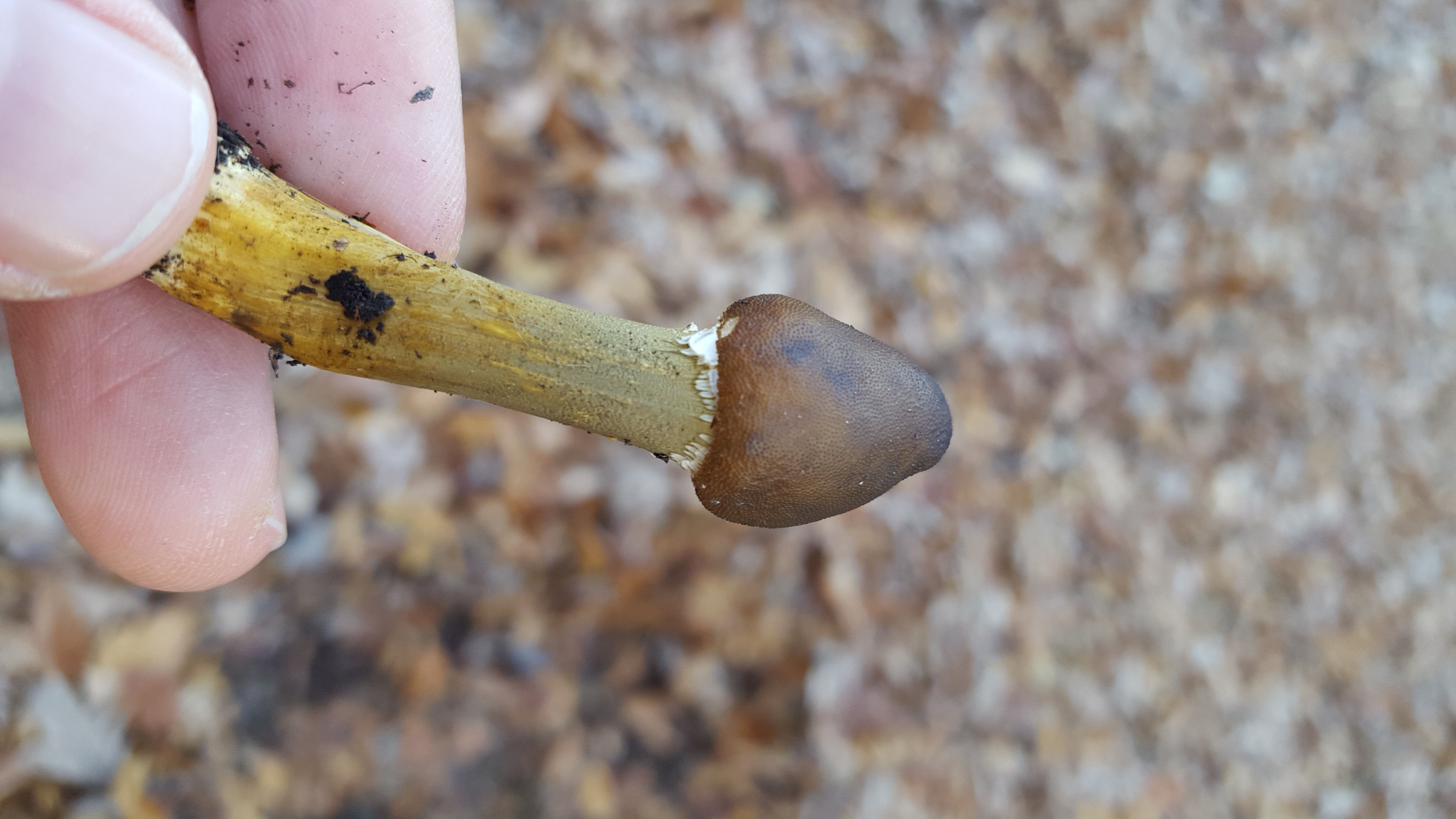 Today we have something very special.

Ascomycetes is a Phylum within the Kingdom fungi. Most of the mushrooms I've discussed and found have been Basidiomycetes. The difference is as follows:

Now there are many famous ascomycetes mushrooms - top among them being the morel. However, far stranger mushrooms also call the Phylum home, including Cordyceps capitata. Stumbling upon this species in the forest, it is not remarkable looking at a glance.

Yet, something about the mushroom called to me very distinctly, as though I had seen it somewhere before. Yet I could not put my finger on what it was that made it special. I bent down low and looked carefully at the two specimen with my hand lens. The strange mushrooms had an almost vestigial feel.

I noted that the cap was oddly textured, like shaved human skin with goose bumps. 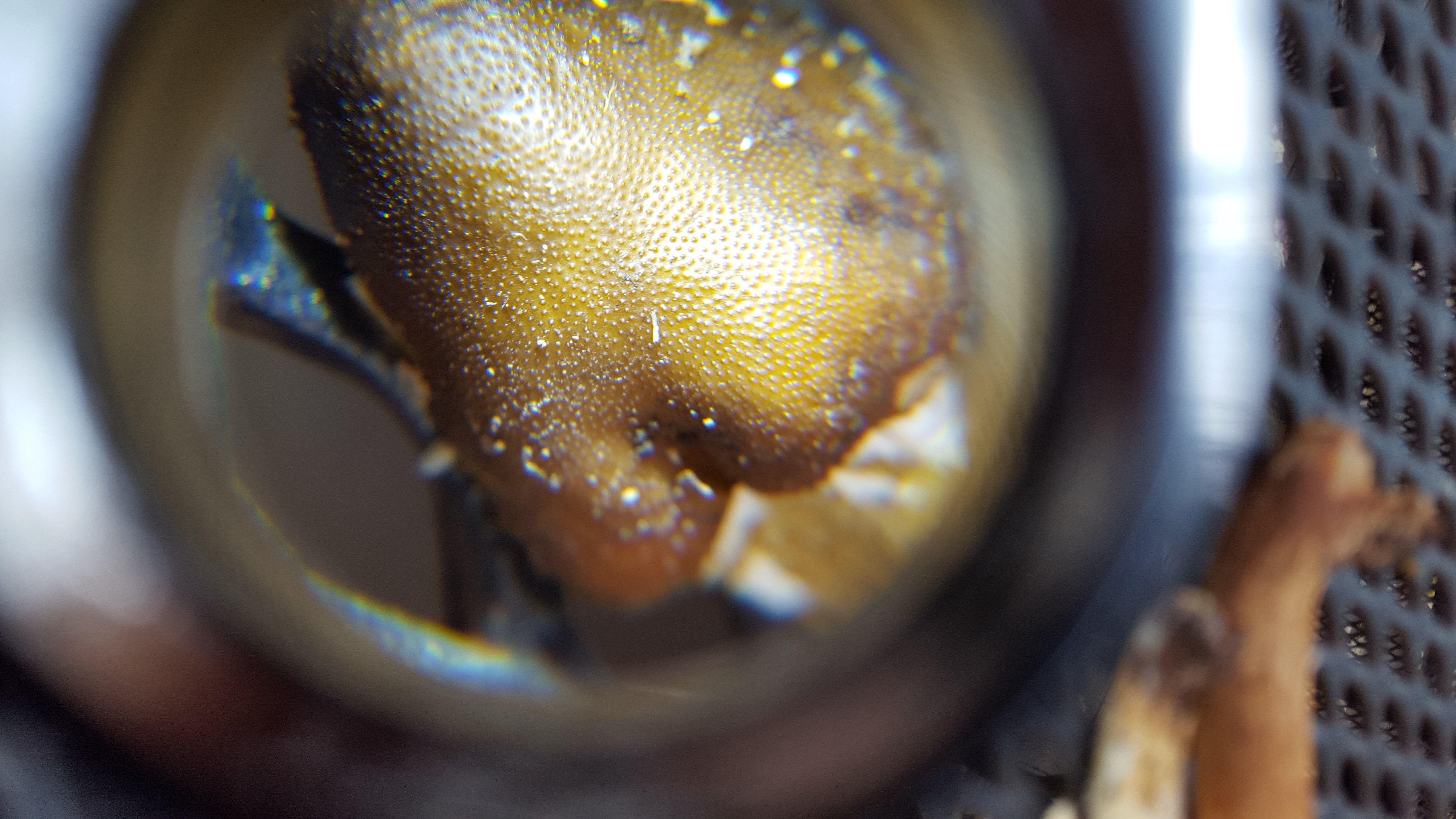 At the time, I couldn't tell whether the cap was fully developed.

The dark yellow stem with some darker coloration along its length seemed to disappear seamlessly into the phallic head of the mushroom. Looking at where the cap met the stem it seemed unlikely that this cap was simply immature, but I wasn't certain.

At this point I thought perhaps this was some kind of club fungus, except that the distasteful raised pores seemed likely to be the source of the spores.

At this point, I made the biggest mistake yet - I tore the two mushrooms up from the ground, breaking the stem, put them in my bag and walked away.

Later I started to analyze them in more detail at home and eventually realized my mistake. If there were any lingering doubts as to maturity, bifurcating one specimen banished them.

The center of the mushroom was an undifferentiated white from the top tip of the cap down almost two inches into the stem. The stem itself seemed to have once been a similar color, but had begun to fade. Over the next day or two it would shrivel up almost entirely.

It was after this cross section that I started to get a bad feeling, as though I had really missed something. Looking at these, I now became fairly certain this was in the Phyllum Ascomycetes. But something else was nagging at me...

Let's zoom in on the edges of this bifurcated specimen. 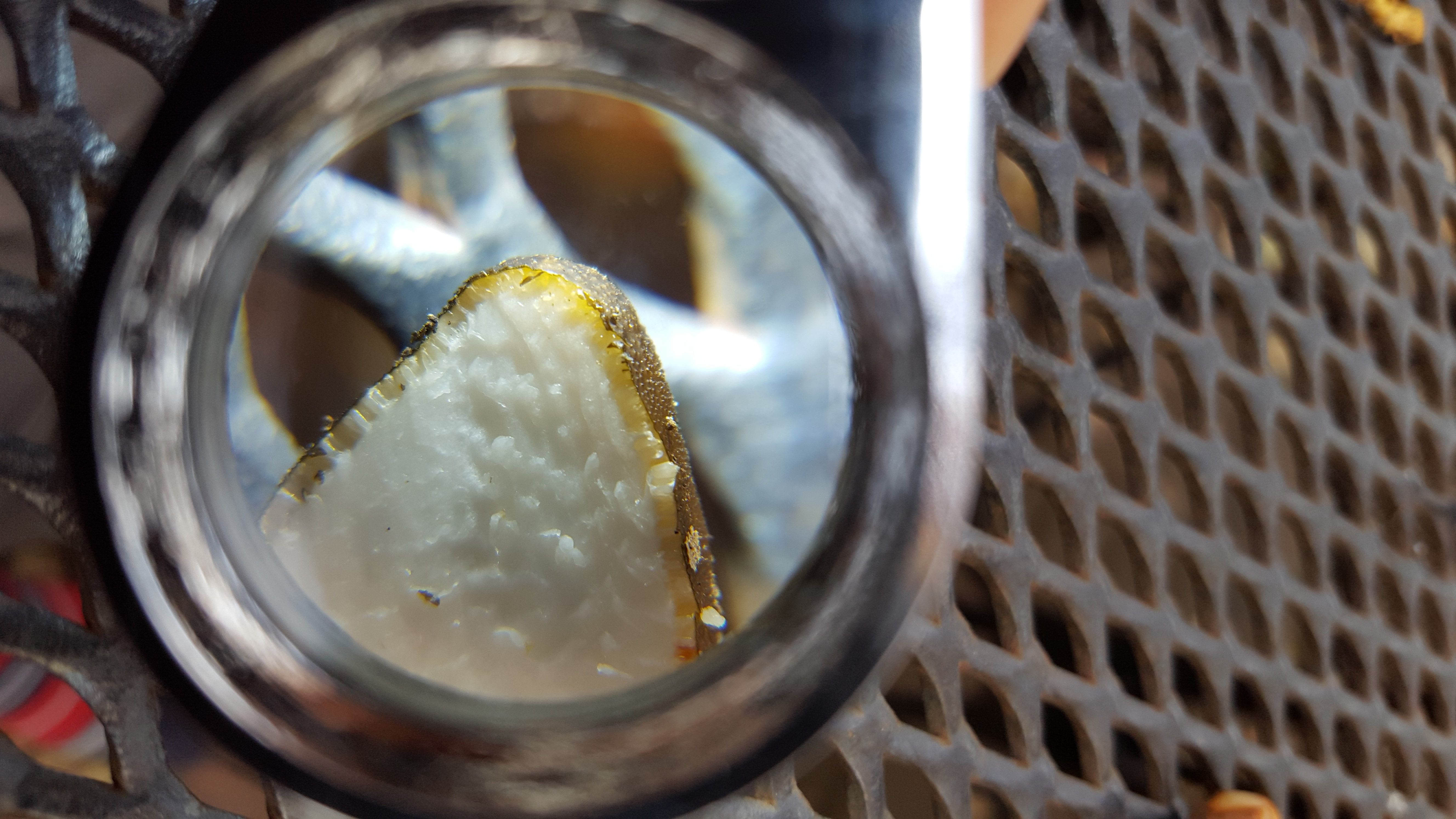 You can see that the cap is covered in a differentiated layer of tubes.

It was at this point that the truth struck me like a bag of bricks - this was a cordyceps! The yellow tube, the strange phallic head with the goosebumps. I had just read about this a few days earlier. But, tragically I forgot - and as a result the most amazing part of this mushroom was not collected! This species is called Cordyceps capitata, and like most Cordyceps species, it is a parasitic organism. Unlike Cordyceps militaris, pictured to the right protruding from the parasitized corpse of a bug, C.capitata preys on a different food source: other mushrooms.

Specifically, C.capitata latches on to a false truffle which grows underground, usually in the genus Elaphomyces. There are no public domain images of this, although the internet is rife with examples. However, in order to illustrate my point here I took the liberty of mocking up the hopefully delightfully rudimentary diagram to the left. 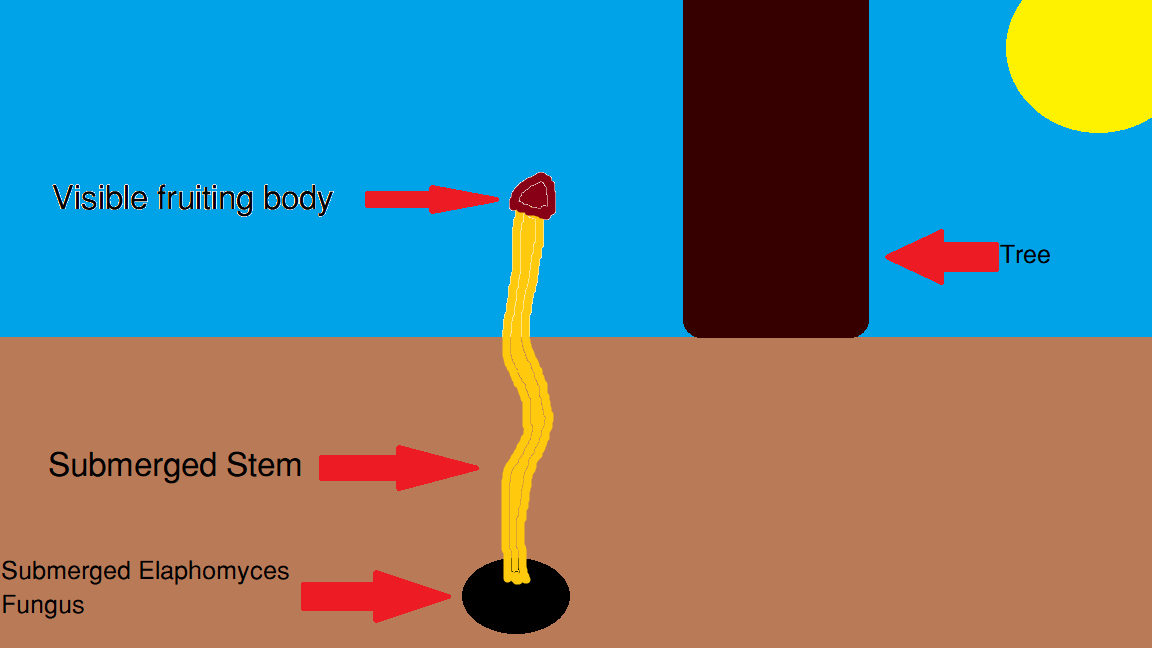 The truffle takes root underground and grows in the dirt. At some point it is infected by C.capitata spores, and the Cordyceps begin stealing away the nutrients of the Elaphomyces fungus. Eventually, when it has taken enough, the Cordycep decides it is time to reproduce and it shoots its heads upwards on a yellow stem. The head breaks through the earth and appears to be a simple terrestrial mushroom.

To the casual observer - or the even the totally non casual amateur mycologist - C.capitata looks like a fairly normal mushroom. But had I carefully dug down around these two mushrooms, there would have been ANOTHER mushroom from which these two were growing.

Instead, I made the novice mistake of simply tearing the mushroom up from the stem and breaking it off, leaving behind the most interesting part of this species' life cycle.

Well - "most interesting" might not be entirely true. Take a look at what happened after I left it overnight. My suspicions about those raised pores were confirmed by the presence of a sharply fuzzy spore mass in the morning.

You can clearly see here how the spores have been expelled. It looks unnervingly like hundreds of black heads being popped simultaneously. The spores actually start off as much longer threadlike spores. However, while still in the asci, the large spore threads break down into multiple smaller spores - Lincoff says into exactly 7 pieces.

Whatever the number, the result is the same - the spores are broken inside of the asci and then ejected from the mushroom. They even leave a spore print. 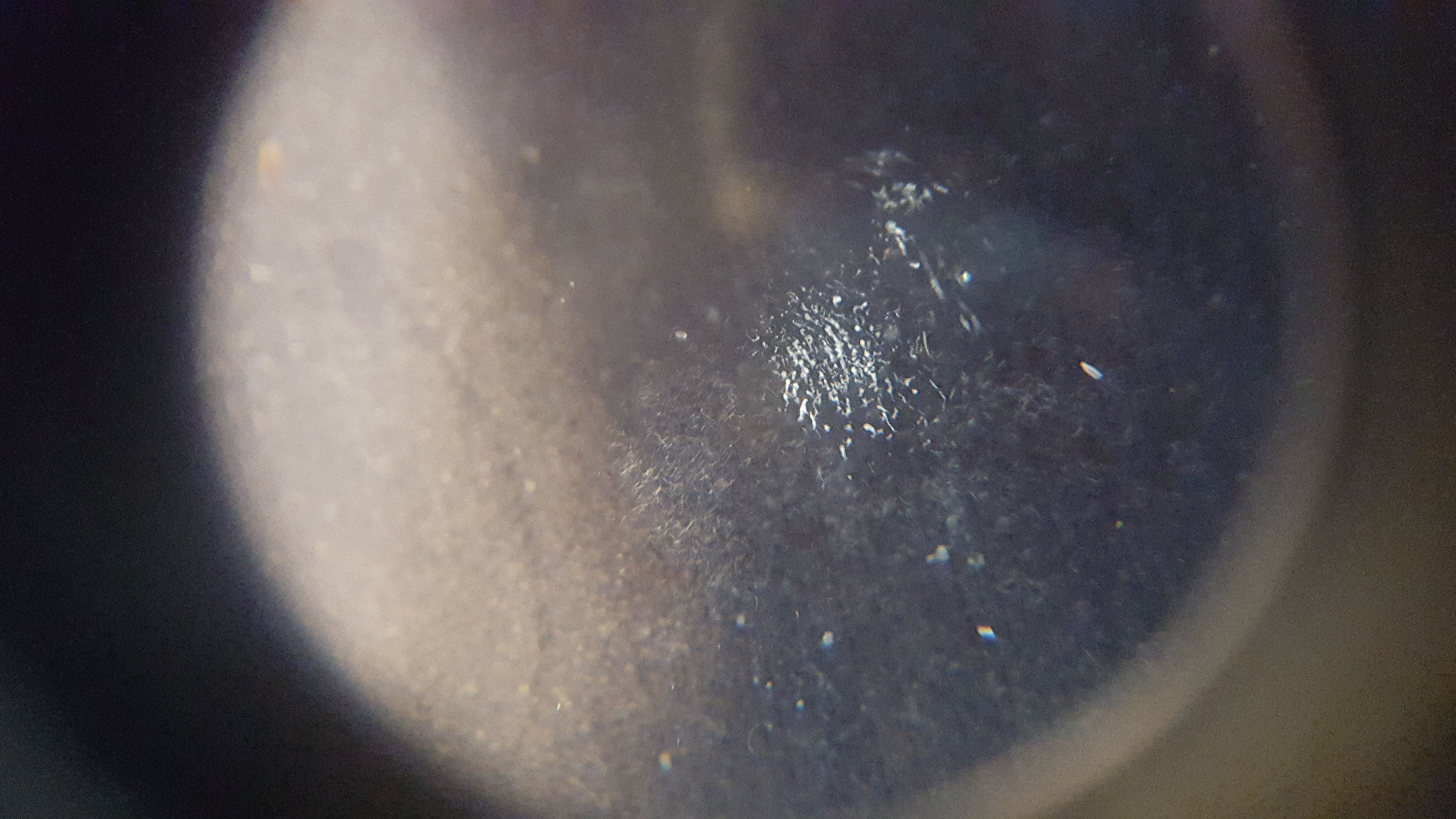 This was surprising to me, but apparently the spores are pushed out with a decent amount of force, relatively speaking. Even more interesting is their microscopic shape. If you've been keeping up with my posts, then this cylindrical spore will be unlike anything you've yet seen on this blog.

The spores vary by a few microns in length, but under a microscope it is fairly easy to see how they might all be pieces of larger strands of spores.

Let's get in real close and measure these things 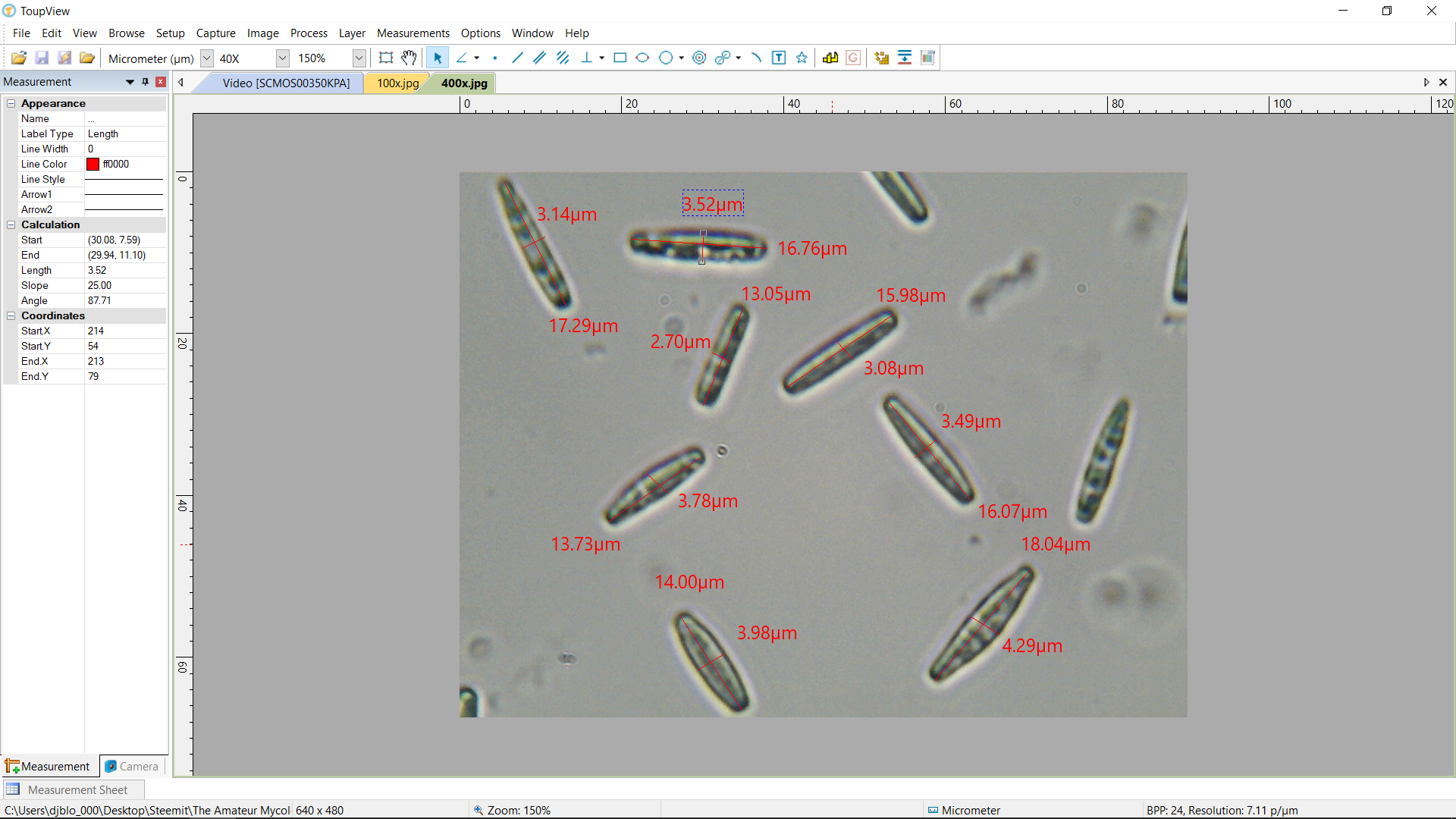 All within a range from about 13 microns up towards 19 microns in length.

It is best practice when identifying a Cordyceps to also procure its parasitic source. Doing so can help to confirm the species you've found. However, this specimen was still quite generous with the detail it provided and based on those details, I feel very confident about its identity.

As a side note, Gary makes a claim in the Audobon that I felt deserved a bit more research. And I did confirm that apparently C.capitata and its host Elaphomyces fungus have played a role in some hallucinogenic mushroom rituals in Mexico. However, it seems like they were generally used in conjunction with known Psilocybe mushrooms - as there is no information I could find indicating that C.capitata or its host contain any hallucigenic substances.

But even if they did not contribute to the hallucinogenic experience directly, I can certainly understand how they might play a symbolic spiritual role in such mystic traditions. There is something truly bizarre about a mushroom as strange and alien as this growing out of another, hidden mushroom. It feels important somehow, even to me just stumbling upon it in the woods.

THIS POST IS NOT INTENDED FOR FORAGING PURPOSES AND TO USE IT FOR THOSE PURPOSES WOULD BE DANGEROUS. DO NOT HUNT WILD MUSHROOMS WITHOUT RELYING ON A COMBINATION OF PROFESSIONAL FIELD GUIDES, IN PERSON PROFESSIONAL GUIDANCE, OR IN PERSON GUIDANCE BY SOMEONE TRUSTWORTHY WHO HAS COPIOUS LOCAL, SPECIALIZED MUSHROOM HUNTING EXPERIENCE. FAILURE TO DO SO CAN RESULT IN GRIEVOUS PERSONAL HARM OR DEATH.

Photos Are My Own Except

Microscopic photos were taken using an AMScope M150B entry level microscope. If you use microscopes, I'm quite sure you've never heard of this model - but its cheap and available on Amazon. The camera lens is also AMScope, MD35 - by far their crappiest microscope camera. But, still capable of material, relevant, and in some cases, dispositive, data collection. Lastly it should be noted that the precise magnifications are not easily deduced using the camera - but based on relative spore sizes compared to known microscopic photos from Kuo and other sources, I estimate 40, 100 and 400x.

I thought about you the other day when I was taking pictures in the snow! I saw these beauties, they were huge, growing on the tree catching snowflakes :D Awesome post. You've clearly put a ton of effort into your work and it shows. Thanks for educating us.

Thanks for reading man - it's all a learning experience for me - and its crazy because everytime I learn something new the rabbit hole goes deeper. The future holds some teal fun stuff - including the possibility of growing slime molds in my living room.

You mentioned morels. I hear that culinary treasure is impossible to grow indoors, (unlike oyster or psilocybe).
Any idea what the missing variable is that limits its indoor cultivability?

Yes - Morels are mycorrhizal, meaning they live in a kind of mutually beneficial relationship with certain species of trees, whereas oysters or some psilocybes are purely saprobic. The saprobuc mushrooms often take to cultivation because they simply require the correct dead organic growth medium.

Mycorrhizal mushrooms require the presence and nutritional additions derived from specific trees. Without the trees, they cannot grow. This creates an obvious dilemma for the morel grower :)

However, people still try - by literally innoculating the roots of a tree with the spore mass of morels. But this seems to have limited functionality and is totally, humorously unscalable.

Interesting post! I wish I knew enough about mushrooms to understand all of it.

If you go back to my first posts you can get a crash course in mushrooms and mushroom identification!

What a great thorough post. I want to attempt my own mushroom growing. I have done the little kits that you can grow oyster mushrooms, rather successful. I will be following now.

I highly encourage you to check out fungi.com ( previously fungiperfecti.com) - it's paul stamets all fungus online store and the fungal world really is your oyster - pun intended - if you want to try growing. If you've already done some of their simpler kits, you can "advance" to more difficult grows - or plugs for wood logs. Just make sure you properly match your species to the wood. My efforts to grow Lions Mane in cherry were doomed from the start... what a waste.

What country are you in. Some interesting finds!

Hi dber, Thanks for posting the information . Now i get more understand about it. have a nice day. nismhd

Thats a first for me, a mushroom feeding from another one, does that mean that the Cordyceps capitata is releasing twice as much soluble nutrients back into the soil. Thanks for sharing and educating x

I don't know the answer to that question for certain, but i dont think so - its just taking the nutrients that the false truffle has already absorbed and reabsorbing them for its own purposes.

So informative! Mushrooms are either yummy or yucky. Haha. I mean, some are species are life-threatening. Anyway, really appreciate this well-detailed post.

Amazing post, so much information, I love information!!!!!! Great work keep it up please!

Interesting article! See them full of vitality. I want to know about all the mushrooms

Truth never damages a cause that is just.