What does an experimental particle physicist do: Measure particles!

One of the most important parts of my work is to measure particles. Loads of particles. The particles I typically measure come from the collisions of the Large Hadron Collider. However, elementary particles are all around us, and particle physicists work in all sorts of other environments as well, for example measuring particles from the cosmos (then it is called astroparticle physics), or particles that are the result of medical research as in medical physics.

Today I am for example in a PhD jury for medical physics, the subject of the doctoral thesis is how to measure and optimise (really: minimise) the radiation dose that radiologists receive during to work. And yes, particle physics also affects you when you have medical treatments such as PET scans and X-ray photos.

So, how do I measure these genuinely tiny particles? The size of a typical particle (let's take a common one, a proton), is 0.00000000000000085 meter! The trick is that for most practical interactions, we use the fact that the particle has charge, not size. And a charged particle will ionise (loosen the electrons around) atoms when it passes by them. For a solid and a minimally ionising (so relativistic) particle, this is tens of thousands of electrons/ions per mm of material traversed, but that kind of depends on the material. 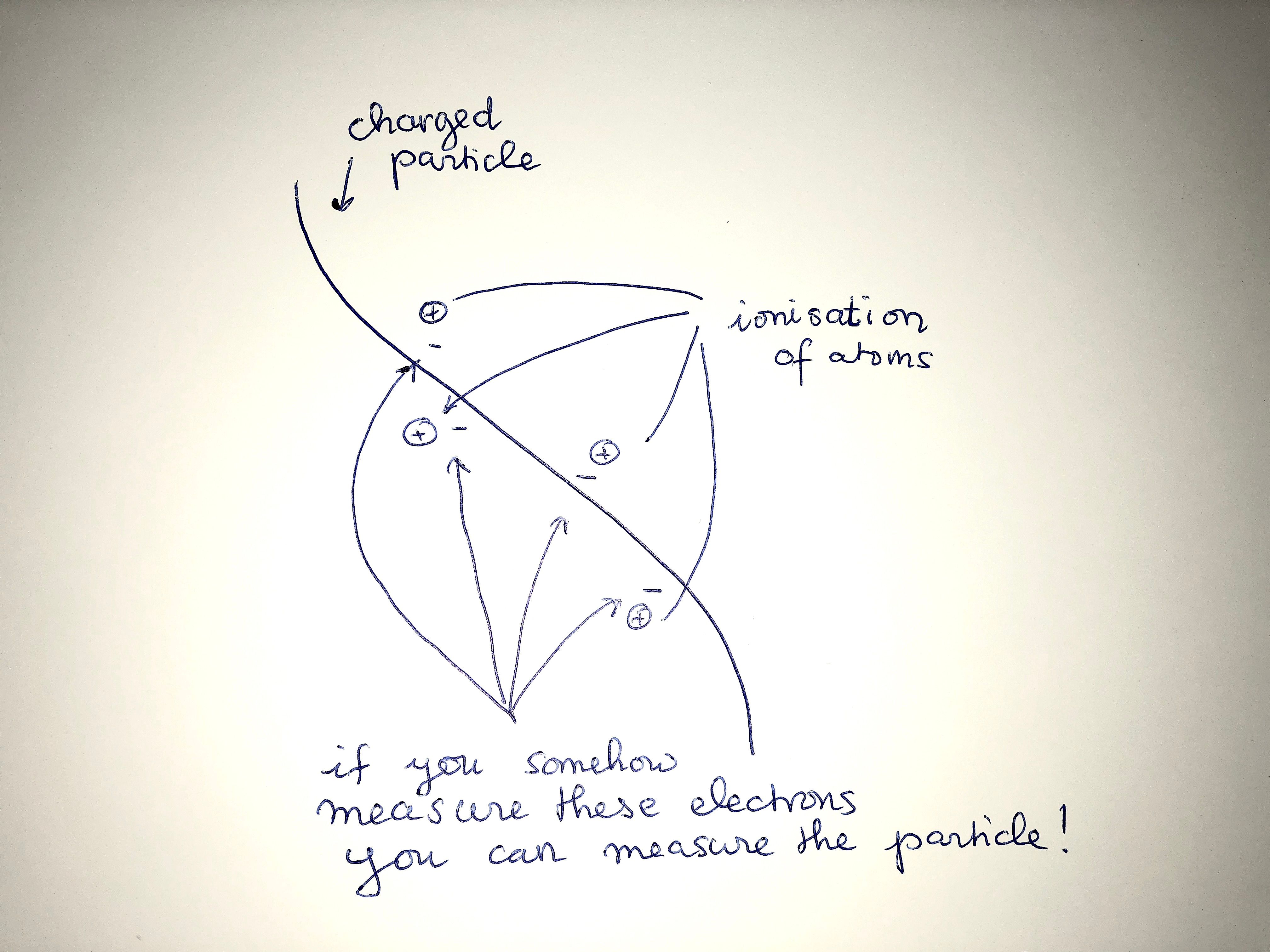 A charged particle traverses matter and hits electrons off the atoms

Different particles however leave different challenges. For example, how would I measure a particle that does not have charge? The answer is actually rather practical:

just make sure it gets stopped by some material and creates particles that do have charge. And then measure those charged particles.

Examples of the more common ones used in particle physics are:

I now have to go back to the PhD defense, let's hope the candidate knows how to detect elementary particles ;-)

note: as I am going slowly through the material, those who are interested in more advanced topics are highly recommended to read @lemouth's excellent recent blog on particle detectors

@freyablekman, this was fun. Can quarks too be measured somehow?

Indirectly yes: top quarks can be reconstructed from their decay products, and lighter quarks will form jets of composite states that one can observe and whose properties can be measured.

Didn't entirely understand you, the decay products and reconstruction of top quarks part to be specific. How do we detect these decay products and bring them together to make a quark?? What precision does it take? But this does remind me that I have a book which might help... Thanks for your answer though.

The top quark is special in the sense that it decays into a bottom quark and a W-boson very promptly, so that it has no time to do anything else. We can reconstruct it from the measurement of the properties of the decay products that can be somehow identified.

For the light quark stuff, please check my answer below and this link.

Now I see what you meant by reconstruction from decay products... I will still dig into the fermions and bosons... I only know a little bit about them.

If you want, you can have a look to my last posts where I started to write particle physics lecture notes for steemit. This is a kind of starter (see here for the lecture number 1 which may answer your fermionic/bosonic question).

I would answer this differently than @lemouth, but the answer would still be indirectly, yes. The simplistic, not entirely correct answer (but good enough to understand) is:

Quarks cannot exist alone, they always come in clumps of 2, 3 or even more. This is one of the consequences of the way quarks interact, described by a theory called Quantum Chromodynamics (three-letter acronym: QCD). But as long as those clumps/composite states interact (so have charge or can be converted into particles with charge, using the first or second bullet in my post) we're good to go and measure them :)

Indeed, when single quarks are produced they quickly 'create' some extra quarks to make a composite particle by any means possible as they cannot exist alone due to QCD, meaning they will use almost all their energy to create quarks (through E=mc^2), and those 'sprays' of new (all composite of 2/3 quarks) particles are called jets. The top quark is a special case which I will discuss in a later blog.

By the way the theory of QCD, and specifically the calculation of the way quarks behave in QCD including this , was recognized by the 2004 Nobel Prize in Physics for Gross, Wilczek and Politzer.

I have actually written some time ago this that may be useful. Please ignore the title ;)

For a solid, this is tens of thousands of electrons/ions per cm, but that kind of depends on the material.....

I think your amount is way to small... only thosands when dealing with a solid 1 cm square: even the least dense item there is at is at 1 proton for 0.00000000000000085 meter, even with a thosand times the space between protons would be way different. nope. The size in meters of a particle has nothing to do with how many electrons/protons get ionized, that only has to do with the charge of the particle that flies through matter, to first order. And yes, it is definitely not every atom that gets ionised, the probabilities are really small.

But charge is much easier to measure than displacement. That is exactly why we don't use the size. It is much much MUCH more likely that an atom is ionised some way than that a particle actually hits (and then displaces significantly) a proton, neutron in an atom.

I did find an error though, those 10000s of ionisations (which depend heavily on material that the particle flies though) should be per mm, not cm. But that is a factor 10, not millions

That being said...
I understand that electrons have huge orbital paths around the nuclei containing protons... and atoms do not go into each others space....

But they are to small to see, and I have worked with microscopes for silicon wafer handling inspection magnifications of 100,000x ...

and have seen 100,000 nand gates in one layer of a chip in a square mm on a single layer....I'm certainly not looking through an electron microscope, just a plain old leitz glass industrial clean room microscopt.

So you claim of a few thousand particles is what makes up cm^3 or even a cubic mm^3 ....

Where do you teach? Obviously not college...

Explained like a professor!! It's a damn good article

Maybe because she is one :D

Most physics teachers can't teach and like most of my physics professors they never get their math right....

I had a prof forget to put a lorenz correction in Quatum mech at the beginning of class he gets to the end and I tell him the speed of light in his equation his equation is the speed of throwing a pie on the wall and he....plots numbers in and sees I'm right 10 miles an hour......after everyone left the class I came up and told him what he did wrong.....

at that point I realized that most physicists really aren't as good as systems architect/designers. Because understanding relationships and the math associated is what they need to do everyday in new ways.

Now I'm not talking about every system designer arch and every physist... I read your posts, and can't wait for the next one! It's like a virtual reading tour :D

Very informative! I was always fascinated by LHC. Great to come across you! Will be following for more

I appreciate that you explain it in a way that is understandable. I've been interested in physics for a while, but never did great at it back when I was in school. I'm excited to learning more about it as you post. Welcome to Steemit!

Congratulations @freyablekman, this post is the second most rewarded post (based on pending payouts) in the last 12 hours written by a Newbie account holder (accounts that hold between 0.01 and 0.1 Mega Vests). The total number of posts by newbie account holders during this period was 5304 and the total pending payments to posts in this category was $5652.35. To see the full list of highest paid posts across all accounts categories, click here.

Nice write up #freyableman, as a graduate in pure physics i say well done sir, really interesting and well explained.

Wow...
You are a very good and detailed teacher @freyablekman.
I studied pure and applied Physics, so I can relate with all you wrote. Thank you for giving me another dimension to particle physics.

thank you for that! I really enjoyed reading it!

great article
whether the particle charge determines the level of radiation ?

Have you found God yet ?