Mercury is the only metal that is a liquid at room temperature. The metal IS used In electnc discharge tubes (mercury lamps), pressure gauges in laboratories and In dental amalgams. Mercury salts are used as fungicides. Inorganic mercury salts are not very toxic If swallowed. Most of the salts are excreted unchanged from the body. 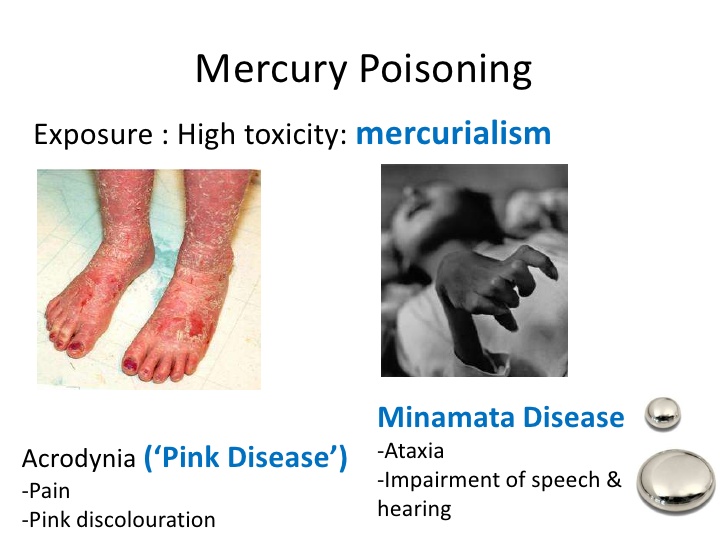 Mercury compounds, Wthh are very volatile or soluble are potential hazards for human system. Fortunately, most of the compounds of mercury are insoluble so, they do not cause toxicity. Mercury vapor, however, is very toxic. If inhaled, it passes into the blood stream, the digestive system and the lungs and is transported to brain. Symptoms of mercury poisoning include depression, irritability, shaking of the hands, and psychotic (suffering from psychosis) behavior.

Organic mercury salts are much more toxic than inorganic salts. Mercury reacts by replacing the two hydrogen atoms in a sulfhydryl group. The free sulfhydryl (-SH) groups are essential for the enzyme’s activity. When the bond with the metal is formed, the enzyme becomes inactive.

Naturally, during the eruption of volcanoes mercury is disposed in the atmosphere and burning coal also does the same. Although mercury is only about 1 ppm in coal, combustion of coal releases about 5000 tones of mercury into the atmosphere every year. In industry producing sodium hydroxide and chlorine by electrolysis of the brine, some mercury is regularly lost through waste products into river water, where it is consumed by fishes and finally by man. Few years ago, mercury poisoning by eating fishes was recorded in Japan as ‘Minamata Epidemic’ (1953).

I would like to recommend this reference on the 'Minamata Epidemic' in Japan to complement your article:

wow thank you sir for the information