The state of the scientific community today is really not what it should be. Funding for many hard sciences is at historic lows (particularly those sciences which cannot produce lethal military weaponry, or cheaper Viagra,) as it is diverted to softer psuedosciences of dubious merit, and the average graduate of the US educational system today would not know a mole from a mole. 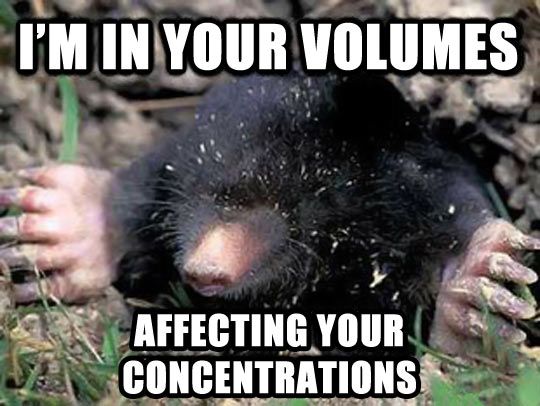 I guess knowledge is an insoluble in the solution of the Kardashian age. This probably isn't helping.

SteemStem is composed of a team of curators who work tirelessly to pore over posts related to the STEM fields. That's science, technology, engineering, and mathematics... just in case we caught you reading Garfield. It's hard to write 54 books, let alone be funny for them.

Anyway, the dedicated team at SteemStem attempt to get said posts curated (and rewarded) in such a way that these valuable posts - which may not appeal to today's meme-y, buzzfeed generation - are actually seen by someone, and contributors of such content do not feel they are wasting their time. They use a careful, publicly-visible system for rating posts at different vote-percentage levels, requiring multiple-curator consensus for the better upvotes. Merit is encouraged and rewarded.

Believe me, it can be very frustrating to take the time and effort to write a deeply researched piece that merits legitimate peer review or discussion, only to see a Dmania cat or Nutella meme plagiarized from Reddit make 10x as much. This is an effort that Steemit desperately needs in the face of a general community unwillingness to modify game-theory incentives to be in line with publicly-stated, desired community behavior.

This is precisely what SteemStem is attempting to solve, and you should support their efforts if you are able. 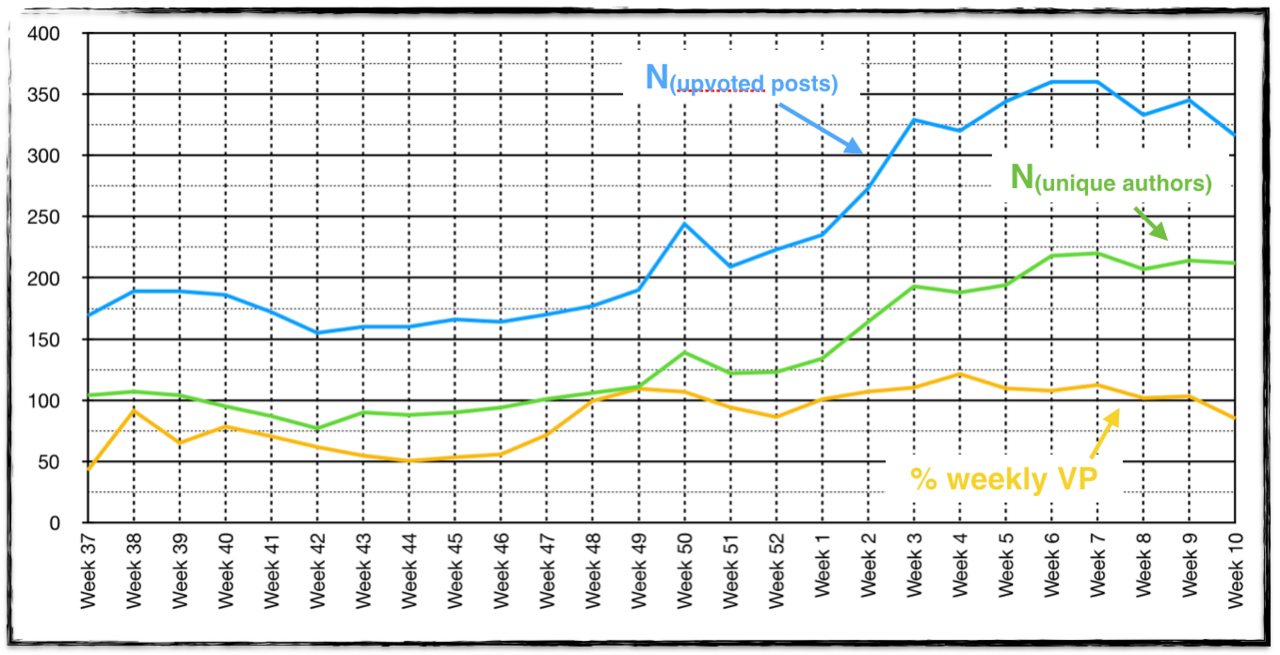 Some past data on their increasingly numerous curation efforts.

SteemStem spends a lot of time and effort on their curation work; indeed, quite contrary to their own self-interest given that time is sacrificed from their own ability to post and they also are rendered ineligible for Curie and other certain curation votes. Consider, for example, how much time it must take simply to track and implement their second Golden Rule for curation:

How can you help? Well, you can delegate to the cause either directly or by joining their voting and curation trail, which will also see you get some curation rewards. However, perhaps the most valuable item anyone could contribute is the time of a truly engaged human. Join the Discord. Read some of the curated posts and offer suggestions or discussion points in the comments. Take on the community challenger to write response posts on any topic that would benefit from more discussion. Contribute your own articles for "peer review" and try to provide some content value to the blockchain.

Just to add my two cents, to emphasize one of the points even more.

Steemstem is not only about curation. It is a project targeting the development of a community of STEM lovers. And I can say we are very close to that. Steemstem members are feeling that they are part of something bigger. They chat with each other, could it be on the discord or via their posts, they support each other, etc. Anything a community would do.

The only people for who life is hard are our 12 curators and the 5 team members (especially them). We work days and nights for making this happen. Yes, we can call this 'work' at this level... But we are people who (still) think this is the right thing to do here.

PS: apologies for spamming the comments of your post with my two-cents everywhere :p

...Completely according to your opinion, SteemStem, is a feasible project that allows you to grow as an individual and as a group, since by being supported with your colleagues a production initiative and high quality post is generated.

They are supposed to be smart enough to recognize blockchain's defects and try to not ruin it more by overloading dtube and its likes with content that could easily, efficiently and profitably be maintained on Youtube, Dailymotion and other centralized video content services.

With this in mind, STEM's importance is underrated by the vast majority.

Why exaggerate?
It receives government budgets and people study it and respect it, so it is rated.

Oh, I thought you were referring to this platform where the support for STEM is very mild (compared to other things).

This comment has received a 43.67 % upvote from @steemdiffuser thanks to: @stimialiti.

@youtake pulls you up ! This vote was sent to you by @stimialiti!

I’m a member of the steemstem community and really they encourage quality stem articles. This is one of the best community I have come to know on steemit and it’ll be great if anyone could support it as it adds great value to the Blockchain. Cheers ! @steemstem

I can verify that SteemSTEM is a great community full of welcoming people that only want to improve the quality of STEM posts on Steemit. Thanks for giving our group a shout out!

How can i be a part of the best steem curation platform steemstem? This seems really good and incourage quality contents here.

Join the discord, learn everything there!

thanks for the channel link

It's a great team. It keeps on improving with the ocasional growing pains.

Thank you so much for these words!
SteemSTEM has given me so much appreciation right from day 1 on steemit, and I probably would't have written so much about science without them - as you said, the frustration of goibg underrewarded for hard work, especially in comparison to others.
And I think that's why I'm doing a sub-curators job now despite the losses, to enable others to experience the same.
TY again, and resteemed, of course.

Honestly,, everything will be doing allright then.

Do you think so? I am less sure than you (says the guy who spends more than 40 hours per week for having this to happen).

Steemit lives and dies on the basis of its content. I find Steemstem to be one of the best curation circles within Steemit.

I wrote a style guide (link here) for STEM posts that you might want to read and provide feedback if you feel like it.

I use it to coach newbies to Steemstem to help improve up and coming STEM authors.

"The state of the scientific community today is really not what it should be. Funding for many hard sciences is at historic lows (particularly those sciences which cannot produce lethal military weaponry, or cheaper Viagra,) as it is diverted to softer psuedosciences of dubious merit, and the average graduate of the US educational system today would not know a mole from a mole."................

You have accurately quoted my opening paragraph.

Should we then upvote this to the 100 SBD reward level? :D

Have taught STEM for four years to the varied age group of 8-22 years old. Gave up in 2015 after stupid got a new high and it's called modern education. Also intelligent just reached a new low and its called google.

The Steemstem community has really helped a lot of people develop more interest in research of Science, Technology, Engineering and Mathematics and I believe it will help the community members psychologically.

@lexiconical can you help me with some upvotes because I want to buy fly ticket for NY for work , Please help me bro

My upvote is worth under 1 penny. You'd have to fly Southwest.

Hahaha this is really funny

Love this @lexiconical you are doing great work.

This is a great idea. Their rating system should be applied to a wider range of topics if it works as they hope.

I have also found Stemsteem to be a really dedicated community producing some of the most high quality content on steemit. Thanks for helping to promote them.

I just wanted to say that I have made many strong friendships ever since I discovered the SteemSTEM community and I certainly believe that many can relate!

SteemSTEM is really one of a kind on the steem blockchain. I have only joined steemit for about 2 months ago and I can say I owe my rapid growth to @steemstem.

It really is good for you to bring to the public attention the great work in which some individuals are really sacrificing a lot of their personal life for.

I implore whoever is capable to support this project by delegating some SP or follow the steemSTEM trail.

So let me end here by saying thank you to you and as well to the steemSTEM community.

For a total calculated bidbot upvote value of $89 STU, $157 USD before curation, with approx. $22 USD curation being earned by the bidbots.

This information is being presented in the interest of transparency on our platform @lexiconical and is by no means a judgement of your work.

True. steemSTEM is the best community on the platform. Not only that it promotes excellent scientific contents it also encourages engagement,since a community needs one. I am very proud that I am a member of steemSTEM here I found a family on the blockchain. 😊

Am I missing a joke here, or is this just a typo: "the average graduate ... would not know a mole from a mole"

Perhaps you means to say: "the average graduate ... would not know a mole from a vole"?