Take a Walk with NASA "Week 3"

Well, despite my hopes for a souvenir, the Chinese Space station crashed into the ocean this week. I only saw one April fools joke concerning this. In the video below, you can see the pieces burning up in the atmosphere. I'm sure this was an awesome site for those who could experience this in front of them.

This week, Space X launched another resupply vehicle to the ISS. Thanks to NASA, we can see a time lapsed video of its arrival prior to the Canada Arm 2 latching onto the craft and bringing it into the station.

This is no easy feat for those astronauts who must operate the Canada Arm 2 inside the Cupola. As you can see in the picture, there are a lot of controls to monitor and work. If there is an error, it would be costly as it could hit the space station. The Russians learned this lesson on their Mir space station. 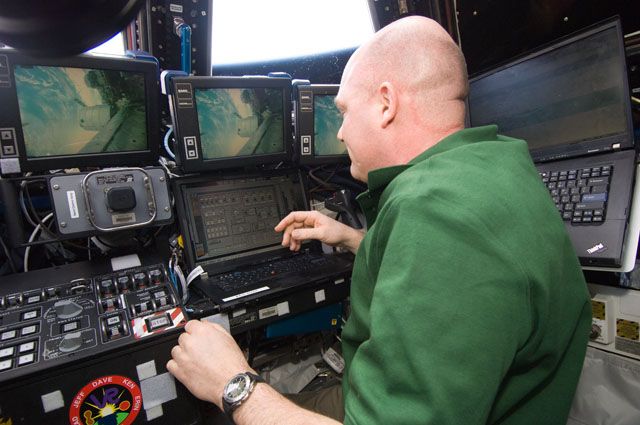 Image Credit
Astronauts have to spend a lot of time learning these procedures before they even launch on a mission. In the below photo, you can see training provided to astronauts by the Canadian Space Agency. Astronaut training is conducted throughout the world by various space agencies in support of the Internation Space Station. On Oct 2014, VSS Enterprise (Virgin Galactic) suffered an in-flight breakup that has put its goal of fairing tourists to space on hold. This week, its new ship VSS Unity made a successful test flight reaching a height of 84,271 feet going Mach 1.87. Using its feather system to increase drag, it successfully demonstrated the capability to slow decent throughout its return to Earth which is a critical factor for each flight. If all goes well, Branson hopes to begin service finally from his spaceport America located in New Mexico (Messier, 2018). Image Credit
Having gone through similar training, it has been a long wait for those customers who completed training at the NASTAR Center several years ago. The thrill of this ride is sure to be a great story when these space tourists finally get to make the journey to space.

Finally in this week's episode, you may soon see advertisements for a luxury vacation spot in space. A new space startup called Orion Span has added their name to companies who desire to make a vacation literally out of this world. This is not the first to do so as Axiom Space and Bigelow Aerospace also have similar plans. For Bigelow, they have been wanting to do this for years. In fact, they have a BEAM module attached to the International Space Station which is being tested there.

Orion Span hopes to be putting tourists on their Aurora space hotel by 2022 after their launch in 2021. Four guests will be able to enjoy their experience with the help of two crew members. If everything operates according to plan, they will then expand their station. From 200 miles above the Earth, these space tourists will have the opportunity to experience the same revelations astronauts in the past have experienced (Wall, 2018). These tourists will see our planet in its true color with no borders and all the wonders Earth has to offer. Of course, without rides to space, it will be hard for these stations to begin operations. If Virgin Galactic finally gets into space tourist operations and other companies follow behind them, the dream of going to space may be sooner than you might believe. Will you be one of these tourists? What would be your desires if such a trip were possible?

Yes. This is very interesting. Tell me, do meteorites look like they burn in the atmosphere? Why does not everyone burn and some fall to Earth?

First of all, these rocks are called meteors when they enter Earth's atmosphere. These meteors come from either comets or asteroids. Once they strike the ground, they are called meteorites. All meteors will burn up while plunging through the atmosphere. As to whether they survive this plunge depends on their composition makeup or their speed. Fewer than about 10% even make it to the ground. Most are in isolated areas, but there have been incidents where they have crashed into a house, cars, or even once an individual.

Thank you, now I know how meteors differ from meteorites!

Today is Cosmonautics Day, I congratulate you on the occasion!