Europa - The Ocean Moon of Jupiter 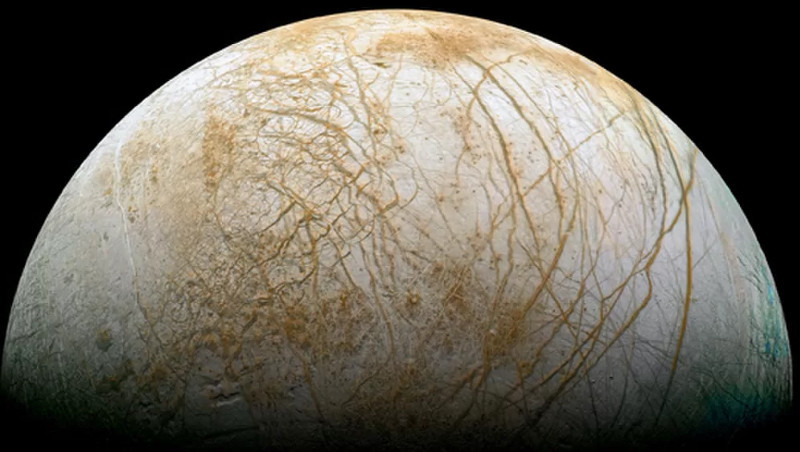 Europa is a moon orbiting Jupiter where the is considerable speculation as to whether it's warm subsurface oceans could be habitable. The possibility of life on Europa even formed part of the plot for Authur C Clarkes 1982 novel 2010: Odyssey Two which was later adapted to film. In that film the intrepid human explorers were given a chilling warning by a higher intelligence “All these worlds are yours – except Europa. attempt no landings there”! Thankfully in the real world we have received no such warnings yet and exploration of Europa is an exciting prospect we look forward to in the coming decade!

Of Jupiter’s large moons, Europa is the smallest but is still almost the size of our own moon (see the diagram below). On the outside it appears to be an almost perfect sphere of water ice 3120 km across. However, beneath the ice is an immense ocean of salt water that covers the entire moon and appears to completely decouple the moons exterior from its interior. Nobody knows exactly how deep the ice, but some observations suggest in the order of 20km, with 60-130km of liquid ocean beneath it. Beneath the ocean appears to be a silicate mantle, and then at the center an Iron/Nickel core. Comparitive size of Jupiters largest moons and some of the inner planets. Credit:Author/NASA

For a brief introduction to Europa please view this short video the author created using Celestia showing how the moon fits into the rest of the Jovian system. It's a little bit incomplete, as it was a bit of an experiment in scripting Celestia. 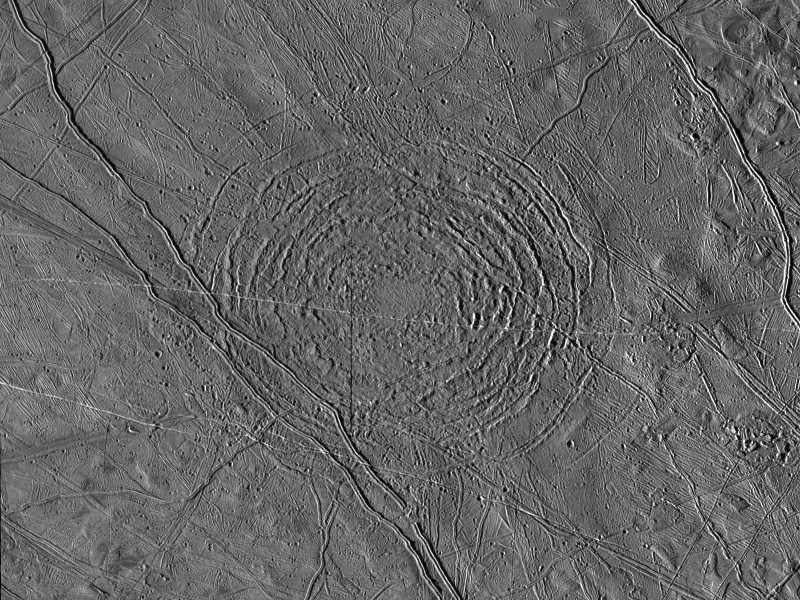 Tyre is a feature where the icesheet has been smashed by an impact. It looks very much different to how other impacts look on icy moons where a distinct crater is left behind. You can really imagine there is an ocean not far below the ice just looking at this image. Galileo/NASA

The moons Ganymede, Io and Europa all orbit in a tidal tug of war that keeps their orbits synchronized in a 4:2:1 resonance that in turn generates stresses within them sufficient to cause heating. This tidal stress in Europa maintains a subsurface ocean of salt water. Jupiter’s magnetic field generate eddy current’s in the ocean which in turn induces a magnetic field around Europa (which is why we suspected a salt water ocean underneath the ice in the first place).

Closer inspection of the surface shows evidence of blocks of ice that have been shattered from the ice crust, upturned, translated and then frozen in place. Evidence from Hubble telescope observation indicate that at least occasionally water is released from the surface indicating fissures open to the ocean below. It is quite possibly the Galileo spacecraft was simply not lucky enough to capture such an event during its Jupiter mission.

Uplifted crust and other features Blocks of ice have been fractured, upturned, rotated and frozen back in place. Galileo/NASA

Estimates for the thickness of the icy crust of Europa range from 4-25km, and there is plenty of evidence for fracturing of the crust as can be seen from the various images. Some structures called lineae run across the moon and are reminiscent of plate tectonics, appearing to be lines where the ice has pulled apart and slipped. Water upwells from the ocean below and freezes in these cracks. Some liquid is lost to space as vapour and minerals in that water color the cracks a brown color (the mineral composition is still not certain). 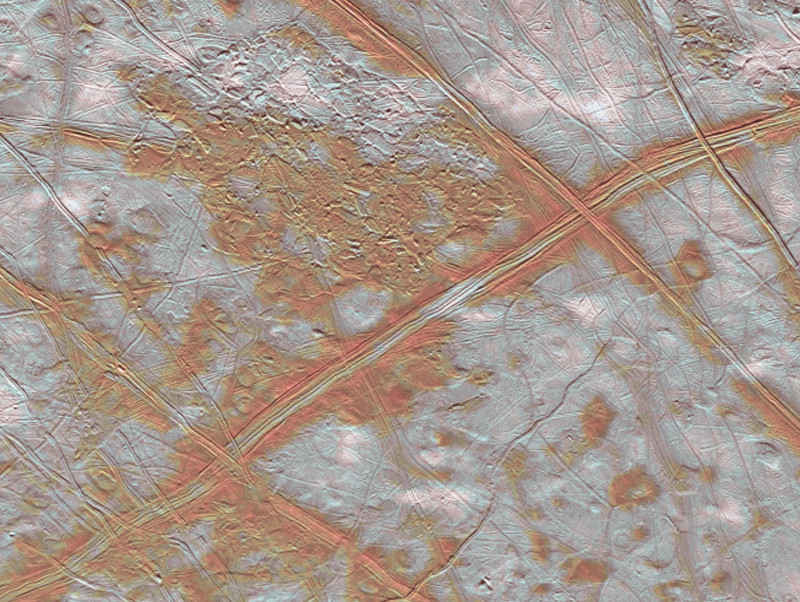 Lineae run the length of the planet and show where the ice sheet has fracture and moved. If you look carefully you can see evidence of sideways slippage. Image Credit: NASA/JPL/University of Arizona

The presence of a warm subsurface ocean is of great interest as it may be the best chance of finding life outside the earth within our own solar system. There are a number of upcoming space missions which will study Europa in more detail, including NASA”s Clipper mission which is planned to launch 2022-2025. It is hoped this mission in conjunction with ESA’s JUICE mission will enable us to characterise the properties of the ice shell and ocean. There is also discussion on probing underneath the ice, depending on what the next missions uncover.

Europa is an exciting geologically active world, like Io but manifesting in a different way. We look forward to the future space missions in a decade’s time which will hopefully discover more about the oceans underneath Europa’s exterior.

In the next installment I plan to look at Ganymede, Jupiter's giant moon that is bigger than the planet Mercury!

This is a test comment, notify @kryzsec on discord if there are any errors please.

Once again thank you Steemstem!

Great post! I am really curious on which moon or planet we will first discover alien life. In any form, microscopic or other! Maybe Europa's oceans is the first. Thank you for sharing your insight!

I wonder too and I hold up some (small) hope we will find something somewhere else in the solar system. It may even show up in an unexpected environment as life has been shown to exist even in the most hostile environments on earth.

Good question, but the main objective of Juno is to study Jupiter from a high inclination orbit so that can observe it's poles. This mean's it does not get close to Europa. The best images are probably no better than what the Hubble telescope can deliver.

Ok thanks for the information

Beautiful and thank you again! I am loving learning Astronomy through you! It really helps my Astrology and understanding the planets :)