Jupiter’s Opposition arrives on May 9, this year, which is the point the earth is on a line between it and the sun. This time is also the best time to view the planet as it is closest to earth and is also in a favorable position of the sky for viewing. However, great views of Jupiter can be had now as it’s beginning to rise in the late evening. Look for a brilliant star rising in the east around 10 pm.

As usual, this article contains a lot of my own material since I actually get out there and observe astronomical objects!

When to see Jupiter

Finding Jupiter is not difficult because it looks like a brilliant star and it is just a matter of knowing when it rises. Like all planets and stars, Jupiter always rises in the east (it could be Southeast or Northeast depending on where you live).

From data obtained by US Naval Observatory I was able to generate this plot of rising and transit times of Jupiter. Transit time occurs when the planet is highest in the sky and is typically when the best views are obtained. Although the graph has been done for a latitude of 35 North it should be approximate for most other locations. 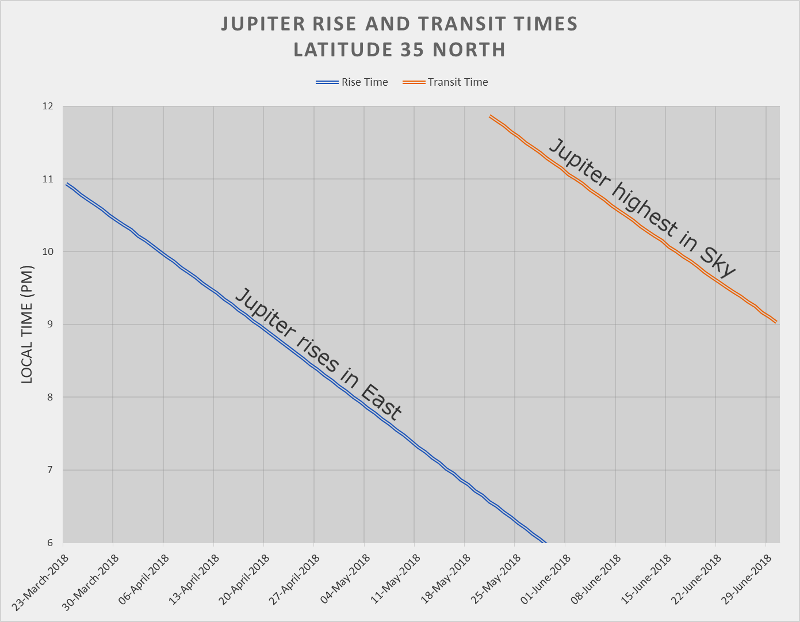 Jupiter is the largest of all the planet's in our solar system with a mean diameter of 140,000 km or 11 times larger than earth's diameter. Because the planet rotates so fast it's equator stretches out making it noticeably oblate. One full rotation on Jupiter takes just 10 hours. The following image shows the various structures of the planet nicely. Hydrogen and Helium are the primary constituent elements of Jupiter. However, the atmospheric layer visible to earth contains a perpetual layer of clouds made of Ammonia mixed with various chromophores. The composition of the chromophores is unknown but possibly include compounds of Phosphorus, Sulphur, as well as Hydrocarbons.

A probe dropping down into Jupiter's Atmosphere will not encounter a solid surface. Instead, increasing pressure results in the predominately Hydrogen becoming a supercritical liquid where it's liquid and gas phases are indistinct. For a demonstration of supercritical gases see this fascinating video.

Further down into Jupiter the pressure becomes so high that Hydrogen forms an exotic state called Metallic Hydrogen. In this form of Hydrogen, the electrons are squeezed out of the atoms and are free to conduct electricity which in turn helps power Jupiter's powerful magnetic field.

What to See and Image

Jupiter looks like a brilliant star to the naked eye. However, even with binoculars, the planet begins to show as a small disk surrounded by 4 bright moons.

I've already written a series of articles on the moons of Jupiter. Check out the following:

But to summarise, there are at least 69 known moons of Jupiter, although only 4 (Galilean) moons are large. The Galilean moons include Io, Europa, Ganymede, and Callisto. These moons look like a string of stars set in a line next to Jupiter, similiar to the following image. 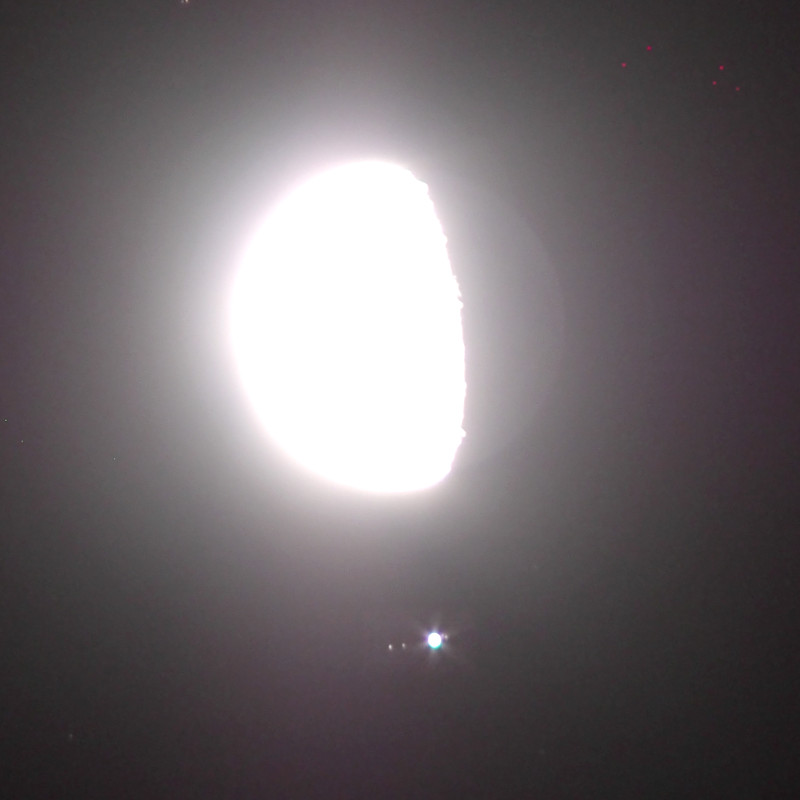 The moon, Jupiter and the Galilean moons. Photographed with a 200mm f4 lens and OMD-EM5 on a tripod. The exposure is about 1 second

The Planet and it's Belts

Jupiter has a complex cloud belt layer that sits at the top of its atmosphere. Through a small telescope, Jupiter usually appears to have 2 dark belts that run across its disk. These are called the North and South Equatorial Belts. The Belts are darker primarily because of the relative transparency of the higher cloud decks in those areas that expose darker regions lower in the atmosphere. Here is an image of Jupiter (next to the moon) which is indicative of how Jupiter looks in a small telescope at low magnification. Jupiter (center) appears near the limb of the moon in this view from the afternoon of June 16, 2005. This is very similiar to the view in a small telescope at low magnification. Note there is a vague indication of the 2 equatorial belts across the planet

At higher magnification, much more detail becomes visible in Jupiter's disk. In an average size amateur telescope at about 200x magnification, the view is very similar to the following image. The North and South Equatorial belts are now prominent, and there are subtle indications of other belts. 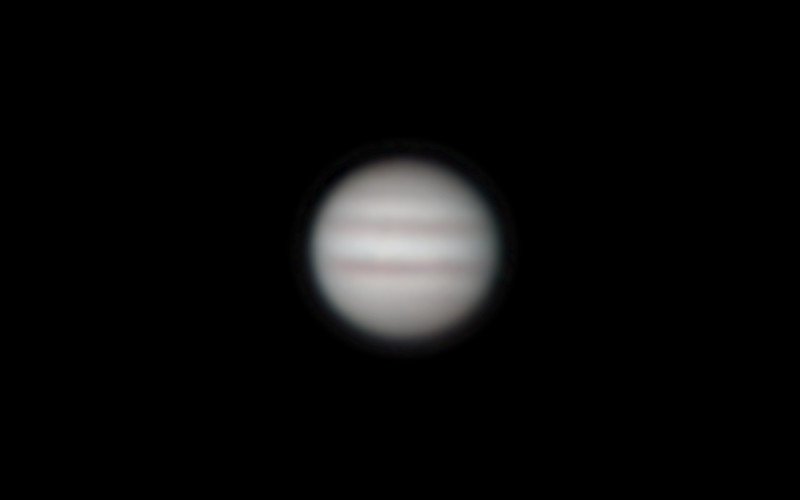 Viewing Jupiter in a high-quality telescope when atmospheric conditions are excellent is an experience not soon forgotten. The belts no longer appear uniform but show intricate festoons and swirls. Subtle color differences are now apparent with a range of purples, orange and creme hues. The following image is indicative of the view of Jupiter under these circumstances. With modern cameras and new processing software very small details can be seen on Jupiter. The following animated gif was from March 17, 2018, while testing a new Monochrome camera and shows the rapid rotation of Jupiter over a period of 15 minutes in addition to the cloud detail. The camera used for this was a QHY183M and the telescope a Celestron C14.

Jupiter image over a 15 minute period on March 17, 2018. Note the planet's
rotation is plainly visible as well as the great red spot on the right hand
limb of the planet

The Juno Spacecraft recently returned some striking views of Jupiter. Looking through some of the images I was keen to find an image showing some 3D aspect of the cloud tops. I think this image fits the bill. The Great Red Spot (GRS) is one of the coolest features of Jupiter and has been around as long as the telescope has existed. These days, the red is a bit washed out so it doesn't quite stand out as much as it used to and when seen through a telescope reminds one of an eye. Here is an image I managed a while back showing the great red spot, which shows the sort of image you can get using an amateur telescope. 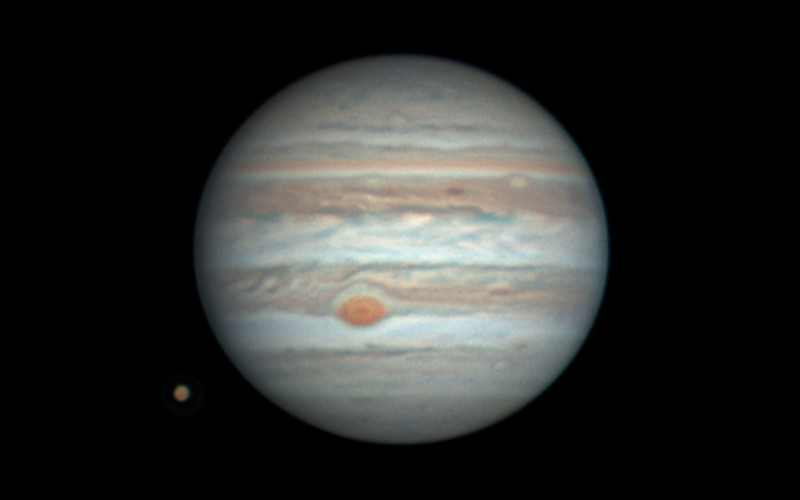 The cause of the GRS was unknown until the first space probes arrived at Jupiter and reveal it to be an enormous hurricane large enough to engulf the earth. Even though it has shrunk in recent decades it is still larger than the earth. The GRS's cyclonic nature is clearly visible in this remarkable movie made by Voyager 1 as it approached Jupiter.

Voyager 1 footage of Jupiter over the period of
a month. Image Credit: NASA/JPL

One of the less expected features you might see on Jupiter is an impact scar caused by an asteroid or comet colliding with the planet. Although rare, they have been observed several times in the past few decades. The impact of Comet Shoemaker-Levy in 1994 with Jupiter is one of the most amazing things I've ever witnessed. Perhaps this year we may witness another.

Over the next few months look for Jupiter in the eastern sky during the evening. To the naked eye it is easy to identify as a brilliant star, but as discussed above even a small telescope will reveal many interesting details including some of its moons and the planet's dynamic cloud belts.

One of the best places for information for Jupiter is the actual space mission websites. Here are some example sites you might want to visit.

For accurate rise/set times for your own location check out the US Naval Observatory web site.

NOTE: All images are the author's unless otherwise specified

Thanks to @ragnarokdel
We have planted already 3286.61 trees
out of 1,000,000
Let's save and restore Abongphen Highland Forest
in Cameroonian village Kedjom-Keku!
Plant trees with @treeplanter and get paid for it!
My Steem Power = 18641.71
Thanks a lot!
@martin.mikes coordinator of @kedjom-keku

Thank you for your comment's @alexander.alexis . I thought some people would enjoy the supercritical video!

Whoa! It's pretty incredible that you took those shots using a telescope on your own. That looks like my next favourite hobby!

Thanks @lordneroo, it's an addictive hobby for sure. One of the fun things as well is you can actually contribute to professional astronomy (but there is no obligation to). In fact, that is an idea for an article I have coming up (although I want to finish the Astrophotography articles first).

Being around during a time of such amazing engineering and science is just amazing. The images we have got from probes like Cassini Juno and New Horizons are just unbelievably beautiful. The formulaic make up of these gaseous planets is nothing more than mind boggling. The violent winds and storms, the dense pressures and toxic atmospheric elements. I shall digress though, I could go rambling forever. Very nice and well read blog.

Thank you @parma3dic there is certainly a lot of interesting science to come out of the study of Jupiter.

Interesting read and some great images. Helps to imagine the scale of the solar system when you learn there is a hurricane on Jupiter you could fit the earth into.

And to think that hurricane was twice the size 40 years ago.

Your knowledge and passion for astronomy is remarkable @terrylovejoy I didn't realize that Jupiter was 11 times larger than the earth and that it was possible to view it with the naked eye. I will have to remember to look out for it around Jupiter at 10pm . (Sharing this fascinating and comprehensively written blog.)

Thank you @trudeehunter definitely keep your eye open, it's the bright star in the east late in the evening. If your an early riser ( 5 am) its the brightest star overhead (for us in the southern hemisphere).

We have a great uninterrupted view overlooking Moreton Bay where we live so I will definitely keep an eye out. 5am is not altogether unusual for me to be up and a about. So I will remember the times you have given me. Awesome.......thanks again Terry.

Obviously, this thing is new for me. I can't believe I can read it til the end. This article is well-written. Kudos.

Thanks @chloroform. That's a great compliment!

Thank you @yblith . I try to make them as interesting as possible.

Thank you and I do plan to keep writing these.

Thank you for sharing this with us, I'll have to keep my eyes peeled as I don't want to miss out seeing this beautiful planet.

Thank you for sharing

Thanks @melbourneswest it's definitely a beautiful planet. If you have a pair of binoculars handy see if you pick out the 4 bright moons around the planet.

That's excellent to hear @criptofeugo. What type of telescope did you use?

Hey @terrylovejoy, It's a Meade Instruments Infinity 102mm AZ. A basic one to start with astronomy :)

That should clearly show you Jupiters moons as well as the 2 equatorial bands. It should also show you clearly Saturn's rings (it's in the east at the start of dawn atm).

Yes, I could see the moons and blurry equatorial bands. Jupiter was my first planet, I hope to see Saturn soon ;) Thanks for the tips!

Hi @xomegax this article is just about Jupiter (not the moon) but as April and May progress Jupiter rises earlier and earlier in the evening.

Very good and full of knowledge and information article!

Congratulations! This post has been upvoted from the communal account, @minnowsupport, by terrylovejoy from the Minnow Support Project. It's a witness project run by aggroed, ausbitbank, teamsteem, theprophet0, someguy123, neoxian, followbtcnews, and netuoso. The goal is to help Steemit grow by supporting Minnows. Please find us at the Peace, Abundance, and Liberty Network (PALnet) Discord Channel. It's a completely public and open space to all members of the Steemit community who voluntarily choose to be there.