Steem Wars: The Voyages of the RS Flying Wardrobe: Episode Six, PO-E-3 at the Poetry Academy 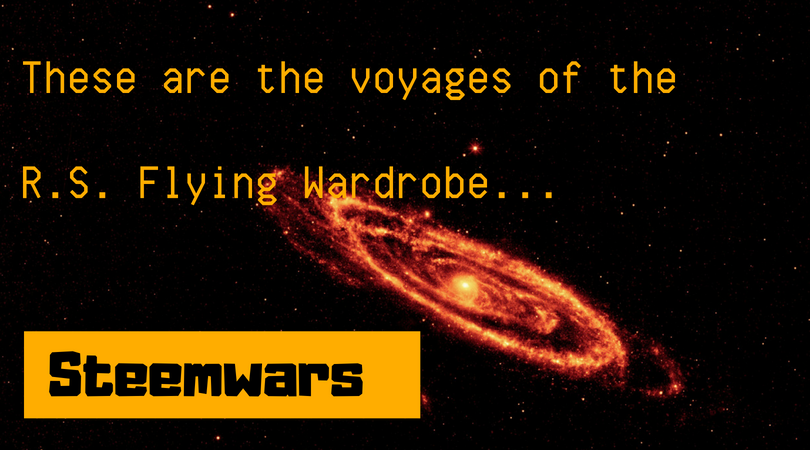 Zombie ambled past me in search of the illustrious hacker worm. Another message from R2-BEX2 flashed across the screens. Seven! Get your butt to sick bay and break out the hazmat suits. We need to be ready to decontaminate Jay and Tiny when they get back. Let’s hope that’s all they’ll need.

Seven stood, blinked twice, turned on his heel and ran from the bridge.

I looked around. A blip sounded from the console. Yes. You. The tall one.

You’re sure you can bring Jay in safely?

I jabbed him with an elbow. “Hey. I can speak for myself, Lou. None of these guys speak Woolfkie anyway.” I turned back to the screen. “You betcha. But I need a location, and preferably some more intel. What does he look like? How does he sound? And what exactly is this Proget’s disease?”

Jay is a tall, brown-haired Earthman. His accent, so I’m told, is a British one. Here is a likeness of him.

The AI displayed a photo on the screen before continuing with the briefing.

Proget’s is a malignant mutation of the PO-E-3 virus. People who suffer from it are prone to use ridiculously flowery and/or archaic language and they often speak in bad rhyme. For a poet like Jay, it’s pure agony and I’m not sure how much longer he’ll last out there.

She showed me a map with a red dot on it. Below, coordinates were displayed.

This is Jay’s last known location. His last message was sent from the main building of the Poetry Academy, where he researched the effects of PO-E-3 on the minds of different species. I’m assuming the outbreak originated from within the lab, though I can’t imagine Jay being so reckless as to toy with mutated viruses like that. It must have been one of his colleagues.

I nodded, and plugged my TD into an outlet on the console.

Liam walked up next to me, and raised his tail before another cloud of poisonous gas filled the room. The Vegan fanned his face and looked decidedly greener than even a Vegan should.

Suppressing a gag, I held my breath. At this rate, I’d face a horde of Proget sufferers if it got me away from the bridge. “Gah, Lou. No more brains for you, bud.”

“Wwwwrrrrrrrrroooooooollllllmmmmmmrrrrrrrr.” He grinned at me rather sheepishly and reached for the thumb drive.

I shook my head as I backed away. “Oh no you don’t. You’re not coming along this time. You and your biological weapon of ass destruction can stay right here.”

The screen flashed with more lichen-green letters. That reminds me...

The bridge door zipped open and Zombie entered, one black worm nestled among the others wriggling about his head. “Crikey! This Hackworm tickles.” He giggled before settling back into his chair at the control panel.

The Blackworm wiggled forward, looking down at the screen over Zombie’s blue forehead and Zombie stuck out his tongue as he looked sideways and then pressed buttons at a frenzied rate.

The TD bleeped and blurped and booped and then a green light flashed from the top. Zombie unplugged it, looked up at me with a grin, and handed it over. “There ya go. All set.”

I accepted the drive, hit the big button, and giggled as my atoms scrambled themselves up so the drive could beam me over to the surface. The teleportation tickled, as always, and a little shiver ran down my back as my atoms realigned themselves in the proper order.

I found myself in a long corridor with doors on either side. Where would I find Jay? “Might as well start somewhere.” I shrugged and opened a door.

Inside, rows and rows of students sat staring at a man in a suit in front of a blackboard. “You there, Sir. If I should discern thee arriving late and attempting to disguise thy unpunctuality by arriving late to my lecture, I shall surely smite thee with the Poxe!” He pointed at a student, standing at the end of a row, backpack in hand and blushing furiously.

The student nodded and began to stutter. “Yessir! I’m terribly sorry, Professor. Please, don’t act like such an aggressor. I had a flat tire, and no air compressor.”

I closed the door gently and leaned against it. “Well, we have good news and bad. I’m definitely in the Poetry Academy. But the Proget’s is running rampant. Even I know that was awful.” Poor Jay. Who knows how long he’d been forced to live like this?

With a shudder, I continued down the hall, until I came to an elevator. Next to it was a list of floors and what one would find on them. “Ooooh! The lab is in the basement!”

Behind me, a door creaked as it opened. “Hello, there. Maiden tall, and with hair wondrously fair! Hast thou perhaps a moment to spare?”

Oh crap. The jig was up. Instead of waiting for the elevator, I took the door marked Stairs and ran down them. If Jay wasn’t down there, I was in trouble.

I burst into the basement, which looked like it had been invaded by recording equipment and computers. Along one wall hung rows and rows of shelves, full of jars connected with wires to the computers. In each jar floated a brain, suspended in some sort of clear liquid.

Thank Goddess I'd left Liam on the ship. He'd really taken a liking to his new rations and he'd have gone mad at the sight of all these brains

In the far corner sat a man with curly brown hair, curled up, with his hands over his ears. He stared at me with a wild, terrified look in his eyes as he shook his head. “No, not another one. I can’t take it anymore!”

He stared up at me. For a moment, I wondered if my antennae were showing, but I knew I’d pinned them down with a hairclip that morning. People tended to look at me funny if they knew I had those.

He opened his mouth, closed it, then opened it again. Wow, that was some impersonation of a fish. Not everyone could pull it off that well. Impressed, I nodded to myself. “Come on, we’ve got to get out of here. Someone spotted me right before I entered the stairwell.”

As if on cue, footsteps echoed through the closed door at my back, running down the stairs. Biting back a curse, I dragged a cabinet in front of the door and ran at the guy. “Please say something. ‘I’m Jay,’” would be nice.

My left hand was in my pocket, grasping the TD with a death grip, as I stuck out my right hand. “I’m Tiny. Your ticket outta here.”

He sprung to his feet. “Bex sent you? Oh thank heavens. I never thought she'd get someone past the barricade!”

Shaking his head, he rushed over to the jars of brains. “I can't abandon my research!”

As he began to pull jars of brains from the shelf and disconnecting them, I rolled my eyes. Great. More brains.

He piled the brain jars on the floor, put his hand on top and took mine. I pressed the button on the TD just as the people in the stairwell managed to thrust the door open, punctuated by shouts of “Halt!” and “Cease and desist, lowly scoundrels!”

Our atoms scrambled themselves and flew up through the layers of concrete and steel, towards the Flying Wardrobe. It tickled.

Yes. Yes I do have my suspicions. blinks
Yup.

I can't get over the Po-E-3 virus leading to Proget's. This is brilliant. The poetry isn't too bad, either. promptly checks in for a physical

@idenkcall, we may have another one for you to decontaminate!!!
Hmmmm... this sounds like an opportunity for crossover...

Oh my! Looks like my work is never finished.

Lol. That could be fun.
Why not?
Nothing else to be done.

Escaped in the nick of time! Keep those brains away from Zombie... he he he the PO-E-3 virus - feel a scratch in my throat and a bit itchy from the worms in zombie's head... why does that always happen...

Hahaha. If you're not careful, we'll end up infecting you. It spreads easily.

Congratulations! Your post has been selected as a daily Steemit truffle! It is listed on rank 6 of all contributions awarded today. You can find the TOP DAILY TRUFFLE PICKS HERE.

I upvoted your contribution because to my mind your post is at least 26 SBD worth and should receive 84 votes. It's now up to the lovely Steemit community to make this come true.

Oh my gosh, I love it! This mission was brill. Sure, I'm crazy late reading it, but who can judge ME??