The Real Life Story of the Marshall Football Team

The film "We are Marshall" came out on film but not without some controversy. The film took some criticism for not being real enough in its portrayal of this football community in Huntington; West Va. 75 people lost their lives in a fatal plane crash. Out of those 75 people, 52 were members of the football team and in addition, other coaches and administrators were also on that plane that took the lives of so many people in 1970. 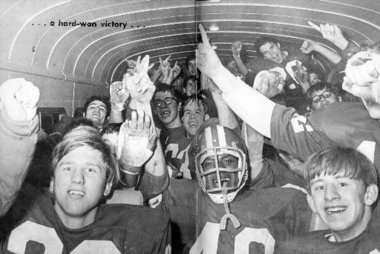 A new coach named Jack Lengyel became the Marshall Thundering Herd football coach with the nearly impossible task of creating a whole new football team that had lost almost every member of the team in the plane crash. The community in Huntington was in shambles and the Marshall Football team really helped to restore the community. It was an inspiring win over Xavier which helped inspire the players who had no hope of wining the game or even one game for the entire season.

The film does not do the actual story justice as it uses clichés and past sports films to incorporate the story which makes the film seem less than real. This inspiring story of a football team and a community is not properly told by the film "We are Marshall." Students at Marshall who had no business being football players and some who had never played football before decided to try out for the team. A soccer player on the school team was chosen as the field goal kicker and he helped out the team tremendously.

The game that movie chooses to dwell on is the second game of the season which was the Marshall team's home opener of the season. The team somehow managed to pull off a 15-13 upset win with a touchdown pass at the end of the game. Yet even that touchdown pass is dramatized because film makers thought that what actually happened in that pass play would not be exciting enough for fans.

The story of the Marshall Football coach is all the more inspiring when considering the fact that two coaches had turned down the coaching job because they both knew that Marshall would not be a competitive football team. However Jack Lengyel who was then the football coach at Wooster College in Ohio decided to take the job. Lengyel was instrumental in the film "We are Marshall" as he helped the film's producers and directors portray a more lifelike approach to what really happened with the football team and the community. It was difficult to get Lengyel to fly on a plane to California because he had refused to fly on a plane since the Marshall Plane crash.

However, he conquered his fears and made the trip out to California. Unfortunately for Lengyel, he was fired at the end of four seasons at Marshall. He then moved to the U.S. Naval Academy where he became an administrator and athletic director. Happily though, when the 1996 Marshall team won the NCAA championship, head coach Bob Pruitt gave him a championship ring for resurrecting the Marshall Football program.

Congratulations! This post has been upvoted from the communal account, @minnowsupport, by aut0matic from the Minnow Support Project. It's a witness project run by aggroed, ausbitbank, teamsteem, theprophet0, and someguy123. The goal is to help Steemit grow by supporting Minnows and creating a social network. Please find us in the Peace, Abundance, and Liberty Network (PALnet) Discord Channel. It's a completely public and open space to all members of the Steemit community who voluntarily choose to be there.