The disturbing stories of children raised in the wild 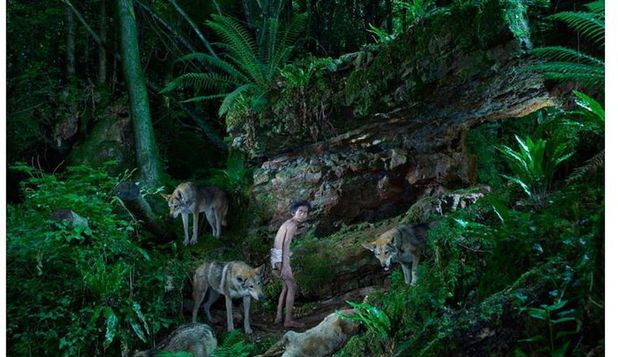 I have heard countless stories about the children raised by gorillas, wolves, panthers and bears. But as opposed to famous screenings, wild children adapt to the brutal environment they live in.

"Children of the Wild" is the photographic project made by Julia Fullerton-Batten. Images show a dark perspective of children raised in unusual circumstances. In some cases, children were lost in the wild or neglected by their parents. The cases presented are on four of the five continents. Kamala, aged 8, and 12-year-old Amala, were discovered in 1920 in a wolf slaughterhouse, according to Vintage News. These were discovered by the priest Joseph Singh, who hid in a tree on the cave.
When the wolves left the lair, he noticed two girls who were at the cave exit.
The girls were unnerved, they walked on four feet and did not look human.
Soon the man took the girls. At first, the girls were sleeping, squirming, tearing off their clothes and eating raw meat. Physically deformed, the wrists and tendons from their arms and legs were shortened. But the sight, the hearing and the sense of smell were extremely well developed.
Amala died in the following years after being captured, and Kamala eventually managed to walk two feet and speak a few words, but died in 1929 because of kidney problems. 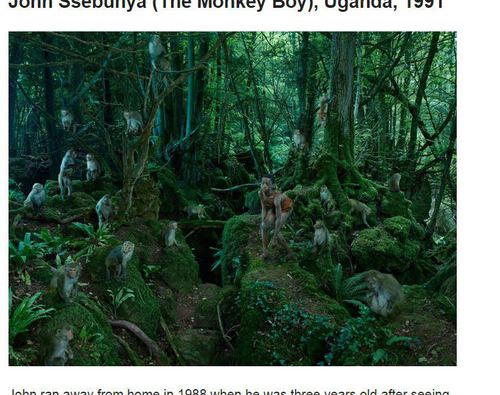 John ran home in 1988 at the age of three years after he witnessed the time his father killed his mother. The boy ran into the woods, where he lived with the monkeys.
In 1991, at the age of six, he was found and placed in an orphanage.
After being cleaned, caregivers noticed that his whole body was covered with hair.
Its daily diet consisted of roots, peanuts, sweet potatoes and manioc, it suffered from a serious form of intestinal worms. Eventually, John learned to behave like a man, and with his voice became famous after he concerted in the UK with the Pearl of Africa coral group. In 1845, a girl was seen running across the four limbs with a pack of wolves attacking a goat group.
A year later it was observed while devouring a goat with wolves.
She was captured but escaped. In 1852 she was seen again while she was breastfeeding two wolves, since then nobody has ever seen her. 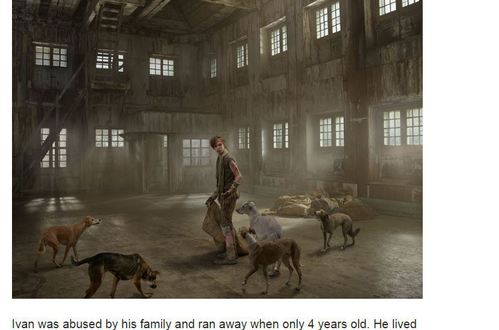 Ivan was abused by his family and ran away from home at the age of four.
The boy lived on the streets, gaining food by begging. Ivan developed a special relationship with a group of dogs sharing the food he received. Over time, dogs have trusted the boy, he became a leader of the group.
He lived for two years in this way, but eventually found and placed in a children's center. For ten years, the girl walked hundreds of miles, alone, through the forests of France.
He fed birds, frogs, fish, leaves, branches, and roots.
Armed with a bat, the girl fought wild animals, especially wolves. He was caught at the age of 19. He could only communicate with screaming and screaming.
For a few years he has skinned birds and rabbits whom he has eaten alive.
During a trip to France, the Queen of Poland met Marie and hunted her. Subsequently, the young woman recovered quickly, learned to write and read. He had several rich employers in his life, dying at the age of 63 in Paris. 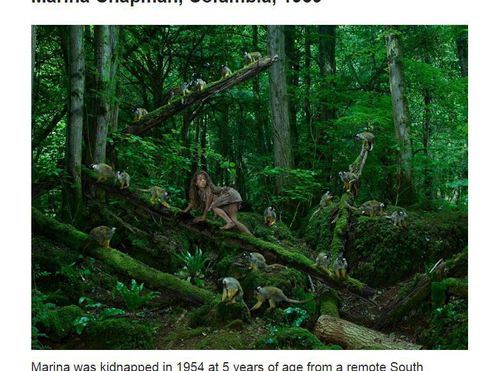 Marina was kidnapped in 1954 at the age of five and was abandoned by the kidnapper in the woods.
The girl lived with a small group of capuccino monkeys for five years.
Marina uses forest fruits, roots and bananas. She slept in caves and trees, and walked on the four limbs.
At one point, when the girl poisoned with fruit, one of the monkeys led her to a pond and forced her to drink water.
The girl was guided by the elderly monkeys, who taught her how to climb trees and the difference between good and poisonous fruits. By the time she was rescued by the hunters, Marina has lost her speaking ability.
The girl was sold by the hunters to a brothel, from where she escaped and lived on the streets. She was rescued by a family who taught her how to behave.
In 1977, Marina became a nursery and housekeeper for a family in Bradford, Yorkshire, UK, where she still lives. Oxana was found while living with dogs in a cottage in 1991.
The girl was eight years old and lived with the six-year-old.
His parents were alcoholics, and they left one night out of the house.
For the heat, the girl was housed in the hut where the dogs were.
Due to the lack of interaction with the people, the girl only knew the words "yes" and "no".
Over time, with intensive therapy sessions, Oxana learned basic social and verbal skills.
She is currently 30 years old and lives in a clinic in Odessa, where she works with the animals in the hospital under the supervision of her caregiver. 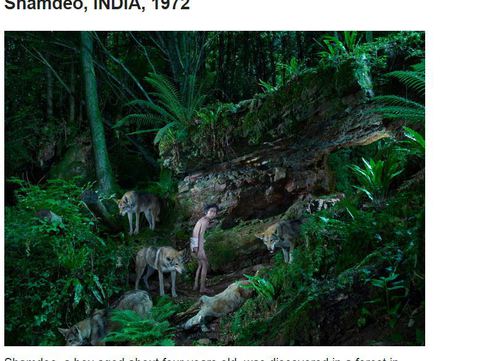 Shamdeo, a four-year-old boy, was discovered in a forest in India in 1972.
His skin was black and his teeth were sharp.
He hounded with earth and had a strong desire for blood.
Finally, the caretakers made him give up the consumption of raw meat, but he never managed to speak. He died in February 1985. During childhood, Sujit showed dysfunctional behavior. His parents locked him in a henhouse. His mother committed suicide and his father was killed.
The boy's grandfather took over the child's entire responsibility, but he kept him in the henhouse. At the age of eight he was found in the middle of the road, cobbling and shaking his arms. The boy peeled his food and pulled out the short sounds with his tongue.
His fingers were twisted inside.
Sujit was taken to a home of elders, where he had aggressive behavior, was tied up with bed sheets for 20 years.
She is currently 30 years old and is being cared for by Elizabeth Clayton, who saved him from the elderly home. 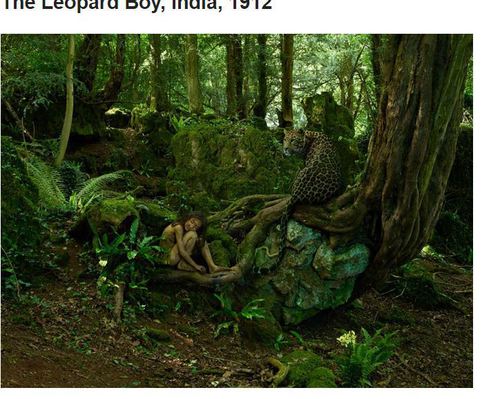 The child was two years old when he was kidnapped by a leopard in 1912.
Three years later, a hunter killed the leopard and found three chickens, one of them the boy who was five years old at that time. The child was taken back to his family from a small Indian village.
The boy stood only in the four limbs, his knees covered with thick skin, and his fingers turned vertically.
The boy biting and screaming on any person approaching him.
He could not speak, he only made sounds and squeals. In time, he learned to speak and stand.
Gradually, however, he was blinded by cataracts, a common disease in his family. Victor was seen at the end of the 18th century in the forests of Saint Sernin sur Rance, southern France. On January 8, 1797, he was captured, he was about 12 years old, his body was covered with wounds, he could not speak or walk. Experts at that time failed to find out much about his life in the wild, some rumors claiming he would have lived for about seven years in the woods.
Some people have tried to teach him to speak, but they have failed.
Eventually, he was placed in a hospital in Paris, where he died at the age of 40. 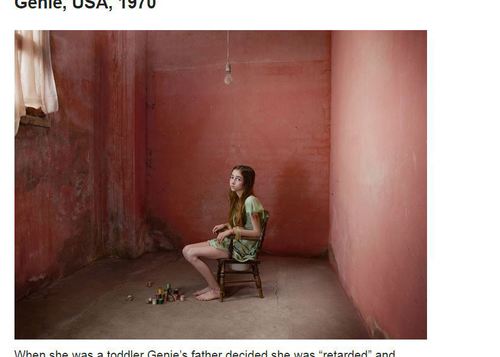 When he was a child, Genie's father decided that the girl suffered from a "retard" and placed her on a children's toilet in a small and empty room of the house. He lived alone for 10 years.
She slept on the same toilet, and at the age of 13 her daughter and her mother were taken over by the child.
The girl had a rabbit position, she could not speak, scratch, and spit out constantly.
For several years, the girl has become an object of study.
Over time, he developed minimal social behavior. In 1974, Genie was found by a local detective in an institution for mentally undeveloped people. Prava, a 12-year-old boy, was discovered in an apartment living with his 33-year-old mother.
The child was kept in a cage room for birds.
His mother treated him like the birds he kept in the cages.
He never abused him, but he did not even talk to him.
His only communication was with the birds.
The boy could not speak, but he whispered. The child was placed by social services in a mental health center where doctors tried to rehabilitate it.

Congratulations! This post has been upvoted from the communal account, @minnowsupport, by batara from the Minnow Support Project. It's a witness project run by aggroed, ausbitbank, teamsteem, theprophet0, someguy123, neoxian, followbtcnews, and netuoso. The goal is to help Steemit grow by supporting Minnows. Please find us at the Peace, Abundance, and Liberty Network (PALnet) Discord Channel. It's a completely public and open space to all members of the Steemit community who voluntarily choose to be there.