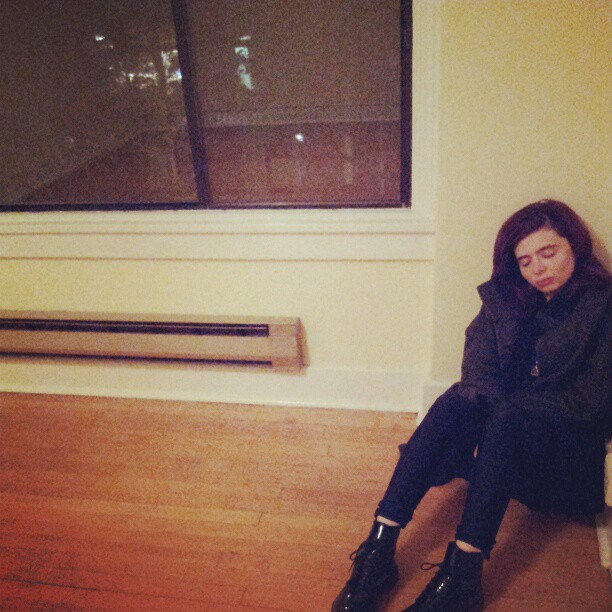 I wanted to be cool. I wanted to be disaffected. I wanted to push myself out through my own eyes so that I could observe the skin-to-skin contact outside of my own body and maybe later, all of this would coalesce into a story. I told myself to never say no, because no was a denial of experience, no meant the story would end, and because no always made people want to hurt you, to deny your humanity, to tell you that you're doing the wrong thing. "No" meant having someone explain to you why you were wrong, why you shouldn't be feeling that way.

But I'm not a character in a story, and I can't keep hiding from the way that this world affects me. I cannot be cool like ice because my skin is built to be burned when fire touches it. I am a human meant to go hungry, but if I push myself out of my body taste loses all of its pleasure. I am designed to say "no" because no is respect for life. It is respect for the self.
And the times I did say no I would take it back, like a wounded animal, something small and hurting who wanted to expose a throat because maybe that meant love. Because love should be boundless, without boundaries, right? Because love meant I would do anything, and I could be anything, and I would shrink myself to fit into the palm of your hand and rub the back of my neck until all of my hair came out.

Because I could be a good slave, right? Isn't that what you taught me?

But if I am a slave, then you are my slave too, and we live in a world bound by the obligation of a thing that we call love, but only vaguely resembles it.

What a fucking way to live.

Is it even assault when you are complicit in your own destruction?

I've lost count of the ways that men have tried to exert their power over me. I won't go into detail, because this isn't a story that requires embellishment. This is my fucking life, not a book to be read for entertainment.

That's where I went wrong, I think, thinking I could make my own body an endless source of cheap entertainment.
Instead of treating it like something to be proud of, to be respected Something with its own power.

You can't abuse a body forever. Years of self-abuse, and my body revolted. I found myself always running. A kiss would have me reaching for the car door, sprinting. My body wound its way through panic attacks. I'd sneak through backyards, block all the numbers, hide away from the windows. My body knew the score, and it was tired of my mind's tricks. It wanted to say no, no, no and despite what my mind tried to pull, it was going to get what it wanted now.

Would I have even believed myself if I came down into a time-machine, and told me that the reason I wanted to kill myself every day was because I refused my own identity? Because I treated myself like an object, and not a person? Because I didn't trust the blood to flush to the skin without my intervention? That I'd spend 3 years trying to put myself back together after I found myself drunk in a bathroom painted to look like the Black Lodge, and texted him "I think I'm at a liminal point." and he asked what liminal meant and I said between spaces, a doorway? I am lost, I am lost, I know what it means to be stuck in a space where no growth can be achieved, I am lost, the black lines blur into the red. This is all because I made myself into a slave. A slave to the story, and a slave to the mind without a body, and a slave to anyone who I thought could love me.
I don't know if I would've listened.

She says: I'm not a goddamn slave. Other posts you may be interested in:
>observer_ , a descent into the hell of the mind [Game Review]
Insta-Famous

I read so many #metoo posts...and I still can't talk about my own experiences.

Resteemed because these needs to be seen by many!

You are absolutely under no obligation to talk about your own experiences. I really hope you're doing well.

This is a very good article on introspection!