The end is nigh

They thought they had found the solution to overpopulation... and they were right but that is not how the story ends
.........

Two centuries have now passed since the humans have been enslaved. And not a single soul can now remember how it was like to be free. How freedom looked like, how it smelled, how it felt like, what colour was it? Freedom is abstract to humans and yet everyone knows that it must be good.
.....
Two hundred years ago, unusually large radioactive meteorite survived the passage through the atmosphere. Nothing unusual at first but after a day, meteorite started transmitting signals. Shortly afterwards they came, lured by the signals sent by their probe.

It wasn't like in the ancient, forbidden movies of the 20th century. They "did not come in peace", and they did not ask us to "take them to our leaders". They simply swooped right through the Earth's unprepared defences. It was not a war between David and Goliath, it resembled more like a sniper assassination, fast unexpected and unfair.
Their shield generator technology made them invulnerable, their ion based weapons and highly advanced biological agents made them brutal. It was all over in a week followed by a puppet world government which was established by THEM. The only duty of newly formed United Earth was to ensure a constant supply of silicon and other ores to their overlords. 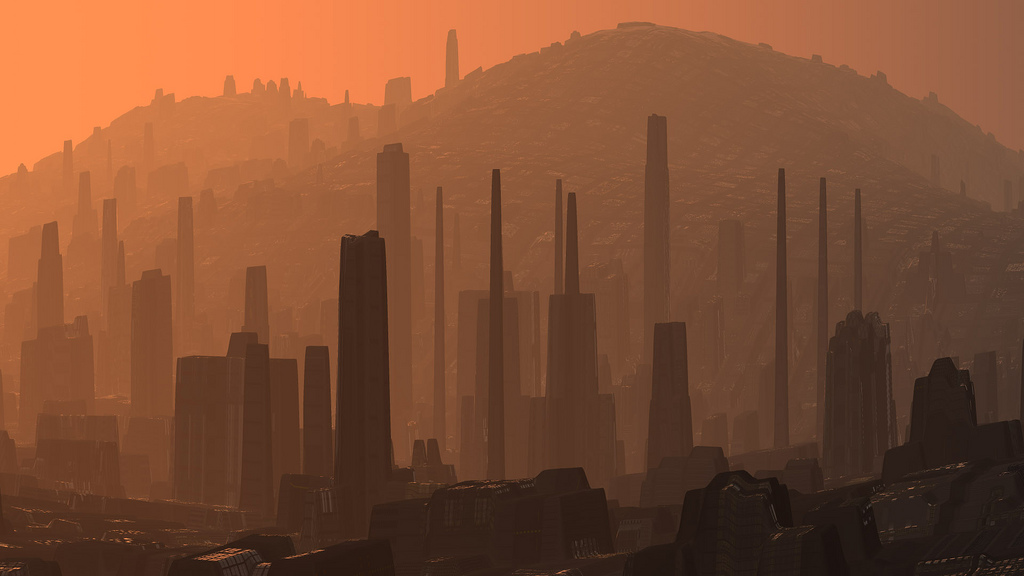 To make matters even funnier is the fact that no one actually knows how they look like, all of the oppression is done by a handful of loyalists who serve their alien masters. If it weren't for an artificial moon orbiting our atmosphere, and alien mining equipment in newly formed "counties" these last two centuries would have looked like a good-old-fashioned human dictatorship regime, not so unfamiliar to us. Even the term THEM is used because no one knows how else to call these aliens.
You can argue about a lot of things considering the human race but one thing is for sure - human spirit is hard to break. The term THEM started when miners of the EURO-counties started using it not as a pronoun but as an acronym -
Tyraniccal Human-Evading Motherfu*****

One thing is important to know about THEM, they don't act violence because they are sadists, they simply use it as a tool. Years passed by and United Earth regime grew more and more violent and oppressive not because quislings escaped their masters' leash, quite the opposite. SImply Earth's recourses were getting depleted and there was simply no need for 4,5 billion humans. Every person who was marked as unusable was sentenced to be used as biomass - common source of fuel in 22nd century Earth.

As time progressed, there was simply no need for new workers. By the turn of the 23rd century, a disaster of biblical proportion came down on an already suffering race of humans. Trying to sterilize humans, probably through water or air, THEM made an error in their calculations. Instead of the inability to produce offspring, women were giving birth to stillborns. A cruel fate for all mothers. What made it even worse is that maybe one in ten thousand pregnancies didn't end in a stillborn but in a healthy baby girl or boy. This made things even worse because every pregnant mother hoped that their child would end up being one of those "one in ten thousand". But most of the mothers ended up heart-broken. This sterilization project, this curse was called the "Armageddon" - end of the world would come not in big flames or with a loud bang... no, no, it will come slowly and painfully like a candle who ran out of wax.

They thought they had found the solution to overpopulation... and they were right but that is not how the story ends.

Due to the error in the sterilization project children who were born were now considered miracles, gifts from the heavens.... they were known as "Angels". Miners hid the Angels from the regime, from THEM, otherwise, their fate was biomass.

Some Angels were discovered, but some grew, hidden under the radar, gaining semi-divine status across the counties. One Angel, in particular, felt the pressure of his status among humans. His name was Michael, and what a site for eyes he was. Tall and masculine, with golden locks falling over his deep blue eyes. He looked like royalty, like a hero worthy of a poem, or a tale.

But Michael didn't consider himself a hero. How could he? He lived more like a rat, constantly hiding. He felt the power he had, that was given to him by others, but what good is the power if you don't use it.

Michael stepped into the light, flying a banner of hope and resistance for the remaining half a billion humans. Inspired by him, other Angels decided to spread his message, adding more and more fuel to the fledgeling fire sparked by Michael.

Before United Earth government realized the magnitude of the movement, it was too late. Angels overthrew the government almost as fast as THEM overthrew the governments of old. All eyes were now on Michael. Humans control the planet once more, but for how long? THEM are still out there, and they will not tolerate a rogue colony. Michael and his Angels are now responsible for the fate of the entire planet.

This short story was inspired by prompt given by @calluna.

Congratulations! This post has been upvoted from the communal account, @minnowsupport, by spalatino from the Minnow Support Project. It's a witness project run by aggroed, ausbitbank, teamsteem, theprophet0, someguy123, neoxian, followbtcnews, and netuoso. The goal is to help Steemit grow by supporting Minnows. Please find us at the Peace, Abundance, and Liberty Network (PALnet) Discord Channel. It's a completely public and open space to all members of the Steemit community who voluntarily choose to be there.

This post reminded me of a book I read long time ago:
The protocols of the Learned Elders of Zion .

I didn't read that one, but my intention was to create a story that had a feel of campfire story in some far away ruined Earth

Waaaa, I love this one. I like it more than others. Maybe it's because it's sci-fi? I don't know. I like to mix sci-fi and fantasy. It makes things much more interesting. I'll read it again in detail in a couple minutes. :)

This is such a fantastic story! I love the idea of overpopulation attraction alien exploitation, the subsequent obsolescence of humanity, and the uprising! Some really original concepts in here. It has a very natural flow to it, I would love to hear more, the battle of mankind for his place amongst the stars!

I agree, this concept has room to grow, and to be honest, I am pretty satisfied myself but I wanted to be true to the challenge - "Tell me a story", so I shaped this post in a way that resembled a campfire stoy, like how would someone tell a story to another person.

You definitely managed to capture that feeling, reading through feels very much like sitting down and being told a story, the kind where you would ask for more and more until it was far too late and you all had to go to bed :)

Great story! I love science fiction and to be honest I had to check the tag at first to make sure it was under fiction. LOL! Thanks for sharing. Will there be more of this story line?

I am glad you liked it. Maybe I am going to expand it a bit, from Michael's point of view

I really liked this. Campfire story... Sometimes I wonder if these are the types of stories that will be told around the campfire in the near future, with the rate this word is going towards now...

What you said now reminded me of what Albert Einstein said "I don't know whit what weapons WW3 will be fought, but I know that the following war will be fought with sticks and stones"

I'd forgotten this! True, sadly...

Yeah, "Never underestimate the human spirit." I enjoyed reading this, it has some strong fictional/non fictional probabilities :)

Quote: "Two centuries have now passed since the humans have been enslaved. "

My edit: "...centuries have now passed since the humans have been enslaved. "

I think this talls everythnih about our history.