In just a few hours, all of North America will witness a total solar eclipse for the first time in 99 years, where the Moon will pass in front of the Sun, casting darkness across swathes of the Earth's surface - with up to 14 states shrouded in complete blackout. 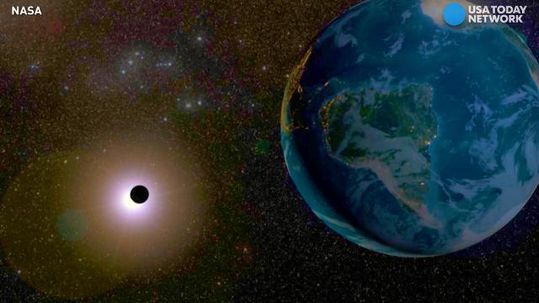 Dubbed the Great American Eclipse, the spectacular moment will see the Sun, the Moon and the Earth become perfectly aligned in a once-in-a-lifetime celestial spectacle seen from the Pacific Ocean to the Atlantic Ocean.

Beginning at 17:05 BST, we Brits will only be able to see the total solar eclipse on our screens. However, although we won't see a perfect alignment in the UK we will be able to see a partial eclipse over the course of the evening (where the moon covers only a part of the sun).

Who will be able to see the Great American Eclipse?

Everyone in North America, parts of South America, Africa and Europe - including the UK - will see at least a partial solar eclipse, where the moon covers only a part of the sun.

However, 14 states across the United States will experience a total solar eclipse with more than two minutes of darkness descending in the middle of the day over the course of 100 minutes.

More than 12 million Americans live inside the path of totality and more than half of the nation live within 400 miles of it. Millions more are expected to travel to cities along the path to witness the phenomenon.

What causes an eclipse?

The diameter of the Sun is 400 times that of the Moon but it lies 400 times further away - which means if you are in exactly the right alignment on the surface of the Earth at the right time, you will see the two celestial bodies overlap exactly.

There's a Great American Eclipse Google Doodle (US only)

What areas will see total blackout?

Anyone within the path of totality will see the sky become dark for several minutes as the moon completely covers the sun. The path is relatively thin, around 70 miles wide, and stretches from Salem, Oregon to Charleston, South Carolina.

It will first be seen at Lincoln Beach, Oregon at 9:05 PDT, with totality beginning at 10:16 PDT.

Over the next 90 minutes, it will cross through Oregon, Idaho, Wyoming, Montana, Nebraska, Iowa, Kansas, Missouri, Illinois, Kentucky, Tennessee, Georgia, and North and end near Charleston, South Carolina at 14:28 EDT.

Its longest duration will be near Carbondale, Illinois, where the sun will be completely covered for two minutes and 40 seconds.

What time can I see the total eclipse?

Here are the mid-eclipse times for some of the major towns and cities along the path of totality, according to Nasa. All times are local.

Will there be a live stream of the eclipse?

Yes - Nasa will host an Eclipse Megacast for four hours during the eclipse which will be picked up by local, national and international TV stations. You can also follow all the action via the Telegraph.

How can I see the eclipse safely?

Never look directly at the Sun, even through sunglasses or dark material such as a bin liner or photographic negative.

Makeshift filters may not screen out the harmful infrared radiation that can burn the retina of the eye risking permanent eye damage and blindness.

Also, viewers must never use binoculars or a telescope.

Wear special eclipse viewing glasses - not ordinary sunglasses - or construct a simple pinhole camera which projects an image of the Sun onto a blank piece of paper.

Sadly there won't be a total eclipse in Britain but we will be treated to a slight partial eclipse which will still be worth watching.

It will be visible in parts of England, Wales, Scotland and Northern Ireland on August 21 - but make sure you're in a spot where there's no cloud.

The partial eclipse begins when the Moon touches the Sun's edge which will be close to the horizon from 19:40, so make sure you have free sight to west-northwest.

The maximum eclipse - when the moon is closest to the centre of the Sun- will occur at 20:04.

Since the Sun is near the horizon at this time, we recommend going to a high point or finding an unobstructed area with free sight to west-northwest for the best view of the eclipse.

When will Britain next see a solar eclipse?

There was a pretty spectacular eclipse in Britain in March 2015, but the last total eclipse in the UK was in August 1999.

You might be waiting a while for the next decent one too - it won't take place until August 12, 2026. On that date up to 95 per cent of the Sun will be obscured.

Britain will not see a total solar eclipse until September 23, 2090.

Eclipses have both fascinated and terrified civilisations for centuries.

When King Henry I of England, the son of William the Conqueror, died in 1133, his death happened to coincide with a total solar eclipse plummeting the nation into darkness for four minutes and 38 seconds.

Historian William of Malmesbury wrote in 1140 that "the darkness was so great that people at first thought the world was ending."