How To Recover Ponzi Scheme Losses (BCC, USI) From The IRS Legally 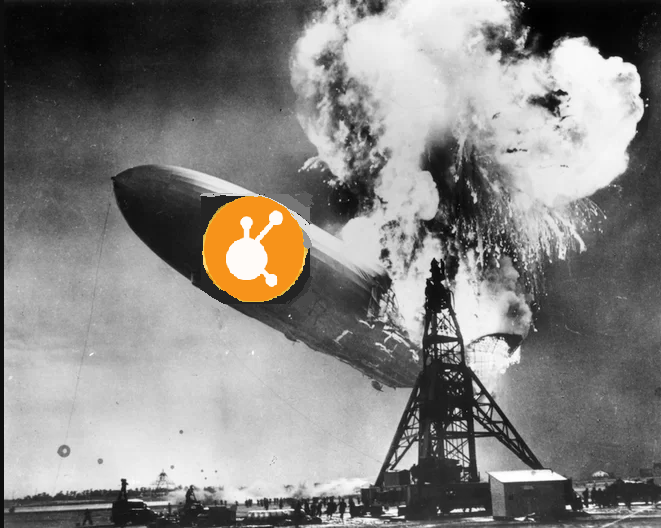 I knew there would be a silver lining.

I know it seems like all bad news when you get suckered. But unlike that time my fiancee rented an apartment in NYC that didn't exist from a scammer with a fake key, you can actually recover a portion of your losses legally, and without bribing the NYPD out of your slush fund.

Here are (some of) the concerns you must address on your tax return, if you have a loss from one of the "lending coin ponzis", such as Bitconnect, USI-Tech, RegalCoin, HextraCoin, EthConnect, etc.

#1. You may deduct your losses on pyramid schemes entered into for-profit as a casualty/theft loss using IRS Form 4684 Casualties and Thefts. Proper source is @cryptotax, not Turbo Tax. Check them out.

Odd coincidence there, by the way - a Turbo Tax "pro" citing a Steemit article!

#2. You must file your losses in the year "they were discovered by the taxpayer" per TurboTax, or in some cases "when substantially realized and no form of recovery is likely". This may require....careful explanation of the facts to determine when you, personally, felt you would not receive your principal back. You'll hope that this is Fiscal Year 2017.

#3. If you do not file in Fiscal Year 2017, you're going to get hit with a nasty tax law change. Starting in 2018, you can no longer carry-back a net operating loss to previous years, recovering your previously paid taxes. You may only carry it forward indefinitely, which means you will not receive tax relief immediately and such relief will be dependent on your future earnings. One should be careful to file legally and in a timely fashion, but you definitely want to realize losses in 2017 if possible. 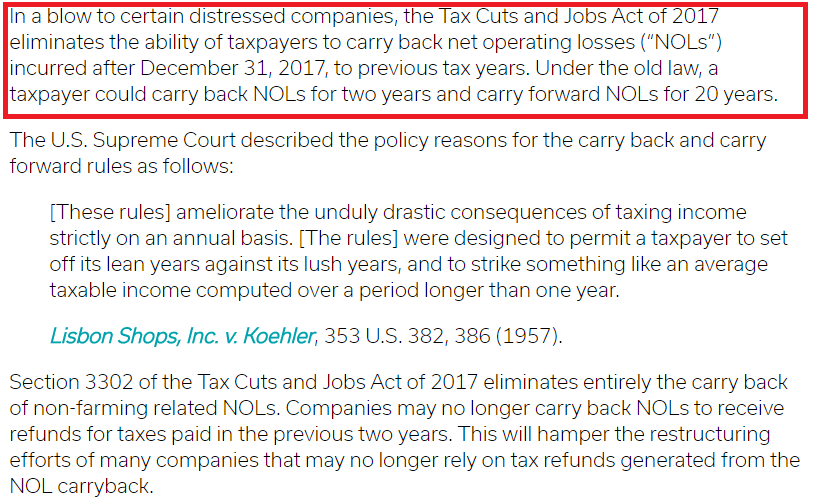 #4. Safe Harbor law. Use it. In exchange for giving up 5% of your claimed losses (and only claiming 95% of your loss as a deduction), the IRS essentially agrees to use the "kid gloves" on you. Safe harbor filings are excluded from many requirements of proof that could result in you being audited later for the mistakes you should have paid a crypto-accountant (which doesn't really exist, catch-22 IRS?) to not make in the first place.

Both the IRS and the courts will also look upon your case more favorably if filed under Safe Harbor, just in case you are audited (a not unlikely scenario when carrying back large losses.)

#5. File an extension if you need one; they are free and easy to get.

"OK Lexiconical, that's a lot of talking and such, but how about some step by step instructions?" 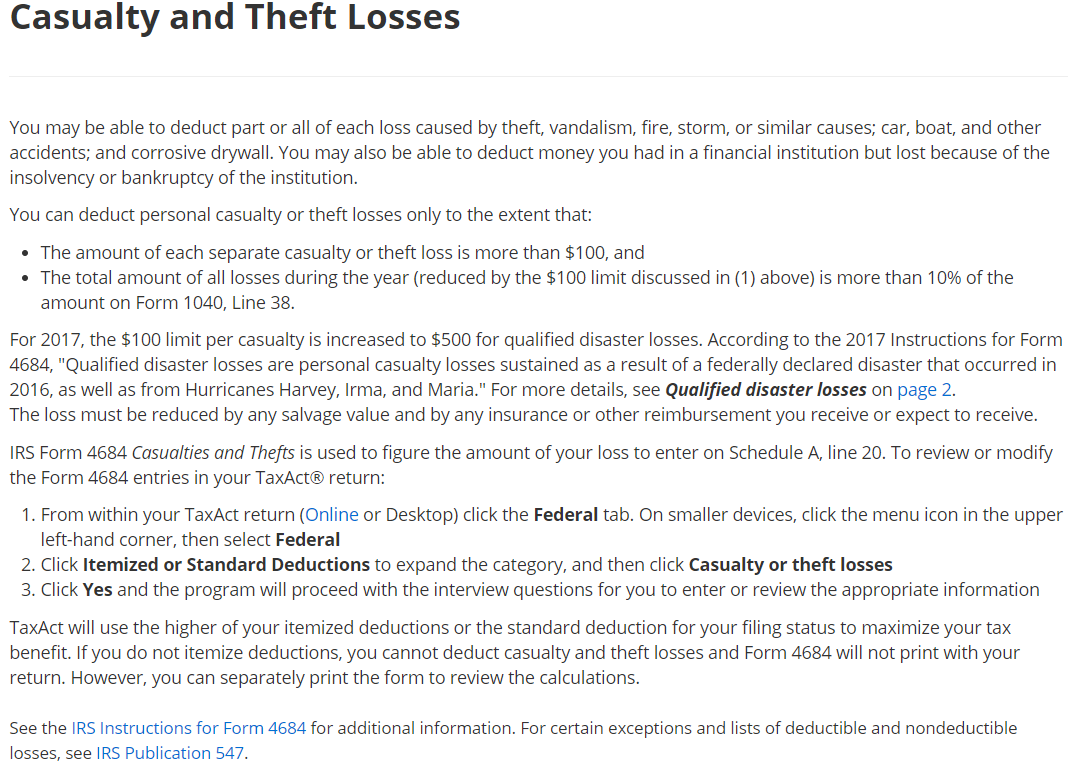 Have fun reopening those old wounds. At least you'll be paid (back) for it!

Disclosure: I am not a currently practicing accountant.

Simply don't get involved in one in the first place.

This isn't very helpful advice for this topic.

Timely and quality piece, this should of easily made it to the trending page as I am sure quite a few people would find this information quite useful... On on flip side, well the tax filing is a complicated process there appears to be some benefits... Well folks like me who suffered losses don't have the headache of filing, I miss out on the silver lining big time

It's a very difficult process to figure your deductions this way. I helped a business who had several years of NOL handle a carryback like this and it literally took us months to reconcile expenses doing a deep dive through boxes of receipts. You don't have that problem with crypto thanks to block explorers, but you are still looking at a lot of confusing IRS form work.

Care to explain why you hit and run-flagged this article with no explanation?

Do you have something against victims of fraud receiving accurate tax information?

Do you like increasing people's tax liability to morally bankrupt governments, so they can buy more bombs and oppress more people?

The possible motivations for such a position are pretty much all bad. What's your malfunction?

Well if all of you invested in Steemit instead on shit coins,you all would be rich! :)

Lol. I'm ashamed to say I was in BCC, I wish I had discovered Steemit before I did BCC, I'd have abit more SP and probably zero loss.
Oh well, I guess its true what they say, everything happens for good. Steemit is actually teaching me to value hard work, commitment, persistence, communication skills and most importantly never to fall for get rich quick schemes.

Those who had lost funds from USI Tech & Bitconnect they can recover their losses from
a very good investment plan which is running from past 11 months.
For more INFORM follow me in steemit
@Suresh Bhuvan

There's room for something crazy in every portfolio - just keep it small enough to lose!

You got that right! Thank you xo

Perfect timing for this the valuable tax info since I have been in ICOs that were ponzi scheme. This help me initially to least know there may be a recourse. Thanks.

Thank you, but I really should have gotten this out earlier for everyone. So busy.

Extensions are free and easy to get - file for one if you need it!

Thanks alot!
Very useful and informative!

upvoted and followed you..

You got a 25.29% upvote from @postpromoter courtesy of @lexiconical!

Thanks for this. While I'm happy to say I don't need to know any of this myself, there are some folks I'll definitely be sharing this with who I simply could not talk out of these scams as they were unfolding.

For a total calculated bidbot upvote value of $395 STU, $693 USD before curation, with approx. $99 USD curation being earned by the bidbots.

This information is being presented in the interest of transparency on our platform @lexiconical and is by no means a judgement of your work.

Thanks for this article.

I am glad that you gave the whole thing step by step. Thankfully I am not a victim. But seeing as tomorrow is the deadline, I hope this helps the people who need it.
The post is probably just in the nick of time for some. Thanks man.

Great work! Thanks for this post learned many new things. It really helped.

It's been very tough to recover u r losses from those two ponzi schemes which were very popular in 2017.
Many people ruined their money with those two scam sites
One is USI Tech & the other is Bitconnect.
Those two sites were banned in USA
USI Tech was a kind of mining program where it was paid 1% on daily basis
whereas Bitconnect was a mlm crypocurrency of ICO in which it's highest value was $450+.
So inorder to recover u r losses from those 2 programs
There are few good mining Investment Programs where u can earn money without Mining at home
It's paying weekly basis with almost 6%
and 1 year Contracts
Investment Plans between $100-$5000 & $5001-$10000.
For more details u can inbox me
@Suresh Bhuvan in steemit or in fb

You learn your lesson and never invest in such shady tactics which clearly can't be sustained over time.

Everytime there will be always people who fall on ponzis. Bitconnect won't be the last...

Thanks for this helpful post @lexiconical! It's good to know these laws exist.

File an extension if you need one

For those who are staring at the deadline; and, are affected by such 'investments', the extension is a great idea.

Just a little addition: For those who owe the IRS, the extension does not prevent accruing interest fees.

It's been a minute; and, I'm glad to say CONGRATULATIONS! on your engagement.

And right wingers complain about overy complicated tax law smh
Who even has a slush fund??
I had to google that one lol

A bounty of 0.044 SBD has been set on this post by @dylen! You can read how they work here.

Who is the ponzi man?

Want to promote your posts

If you would like to delegate to the @steemus-bot you can do so by clicking on the following links:
10SP50SP 100SP500Sp

You Can also Delegate Us Here as you wish.

You are a shit person (bot).