"Hello, we will have to delay the 11.45AM scheduled flight to 6 PM. The change is due to the excessively high temperatures (above 40 degree Celsius). Taking off in this condition is risky as the runway is not long enough to increase the lift required for such a journey with this temperature. We are sorry for the inconvenience and will throw in a complimentary meal during this waiting period. Thank you for choosing Flight Benus."

Mr Richard was infuriated as he listened to the voice over the airport's public address system. He planned to meet a friend by 2 PM, and this unscheduled delay had upset his plans. For him to understand why the high temperature is a problem for the aeroplane to take off, there is need to know how the aircraft flies.

How the planes fly: The Four Forces of Flight 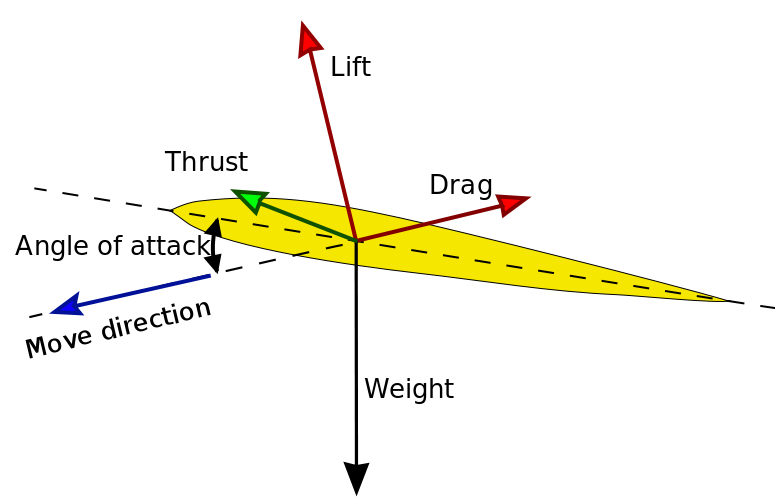 Without a fundamental aeronautics knowledge, there is a chance you may have heard someone talk about "lift" which the plane's wings generate.

Well, that is just one of the forces that affect how an aeroplane flies.

To fly the following four forces come into effect:

Recall that force is the rate of change of momentum which is shown below.

From the Newton's Second Law of Motion, if mass (m) is constant, the sum of forces (F) which acts on an object is equal to the product of the mass (m) and the acceleration (a).

But acceleration is the rate of change of velocity.

Therefore we can rewrite the Second Law of Motion as

If the mass (m) is constant

The rate of change of momentum = mv

Force = rate of change of momentum

Now that we have established the relationship between the rate of change momentum and force let us consider the air molecules change of momentum as it collides with the aeroplane as it moves through the air.

The wings as it hits the air molecules change momentum which invariably means some form of force is at play.

Moving forward, recall that for every action there is an equal and opposite reaction- Newton's Third Law of Motion.

The force exerted on the wing provides the climb in the upward direction known as the lift, which exerts another force in the opposite direction (downwards) known as the aerodynamic drag or simply drag in accordance to the Newton's Third Law of Motion.

So these two forces always occur as a pair as there would no lift without a drag. The two acts on the plane, with the lift pushing it upwards and the drag pulling it towards the earth. The engine's thrust counteracts the drag to keep the plane from plummeting to earth.

The equation of state has the relationship between pressure, density and temperature for a perfect gas.

Looking at the equation which could be rewritten for density as Wikipedia Licenced CC-BY-SA-4.0 by T.seppelt: Graph of Density against Temperature

That means the density of the air becomes "thinner" as the temperature increases.

This reduced density alters the lift-property of the air. The lesser number of molecules of air around the air wings would not be enough to generate adequate lift.

It also reduces the fuel/air ration required for combustion. The reduced density means a decreased molecules of air that will enter the cylinder for combustion to be more efficient.

But you can always compensate for the decreased air density if you could increase the speed of the aircraft. Here requires the longer runway which the, unfortunately, the airport in which the Bonus aeroplane is does not have. I guess Mr Richard will have to wait till 6 PM when the temperature is lower, or he can always use the road :)

That explains the reason my cousin's flight was delayed in Phoenix Arizona last summer. They have crazy temperatures there.

Really? I think the cousin will have to exercise more patience when next that happens. Thank you.

Wow! I never knew that temperature affects the performance of airplanes.
I've just learnt this.

Thank you so much @samminator. It is the beauty of steemit, we learn a lot of new things here. Just took a peep on your blog, you have a nice blog. Thank you.

Interesting piece, so what happens when there is extreme cold,like -50°C

Extreme cold will reduce visibility and it is unsafe to fly in such condition. Thank you.

That was enlightening, I always thought the only problem of flight is cloudy weather. Wow. Thanks for sharing.

I thought so too at a point. We are all learning together here. Thank you too.

That means the density of the air becomes "thinner" as the temperature increases.

I guess, its the basic thing that causing the lifting issue when the temp is high..!

So does it mean that the increased temperature increased the air pressure making it more difficult for the aeroplane to lift off?

This is an interesting and well explained piece. Though it's not field, I must say I understood every aspect of it. Such is the effort you invested in simplifying the post. Thanks

@bitfairy 😨...... Seriously? So, its like this, eh?
Great info in this post. Without this info, I wouldn't have been able to link the temperature disparity with the inability of planes to take off. Thanks for sharing.
Holla at your boy @bitfairy. We need to talk man

A very informative post. Never knew temperature could affect the lift of an aircraft like you rightly described. I just learned something new today !

Wow! This deserves an award. This explicitness, the simple style and clear language used! I bet this is the best post I've read this week.

I actually haven't had the simplest of an idea that this phenomenon is this much related. I am damn familiar with all the terms but I never taught of how it affects an airplane.

Thanks so much for this

Wonderful article. I never knew before this temperature - lift thing. Today I learned something new.

Really insightful and explanatory post you've got here. I especially appreciate your use of mathematical equations relating the various factors of physics at play. It helps give a widened and broader understanding of what you're trying to teach us. Thank you once again!🔥

High temperature = reduced air density am i right?
The plane needs high speed and certain conditions to take off one of which air density is important.