I visited London… Of course I ate at pubs… 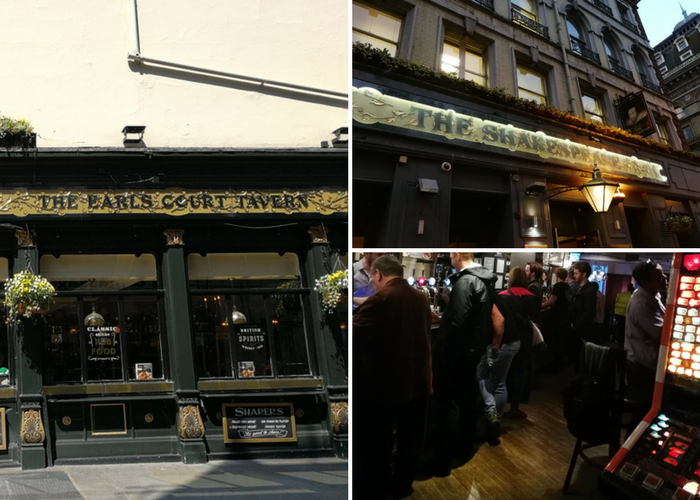 Pubs are places that British socialize, drink , play a game once in a while, watch football and eat. The first pub I visited was “Shakespeare”, which is located next to Victoria station. Have you ever noticed that every underground has a station called Victoria? Even Athens has one. 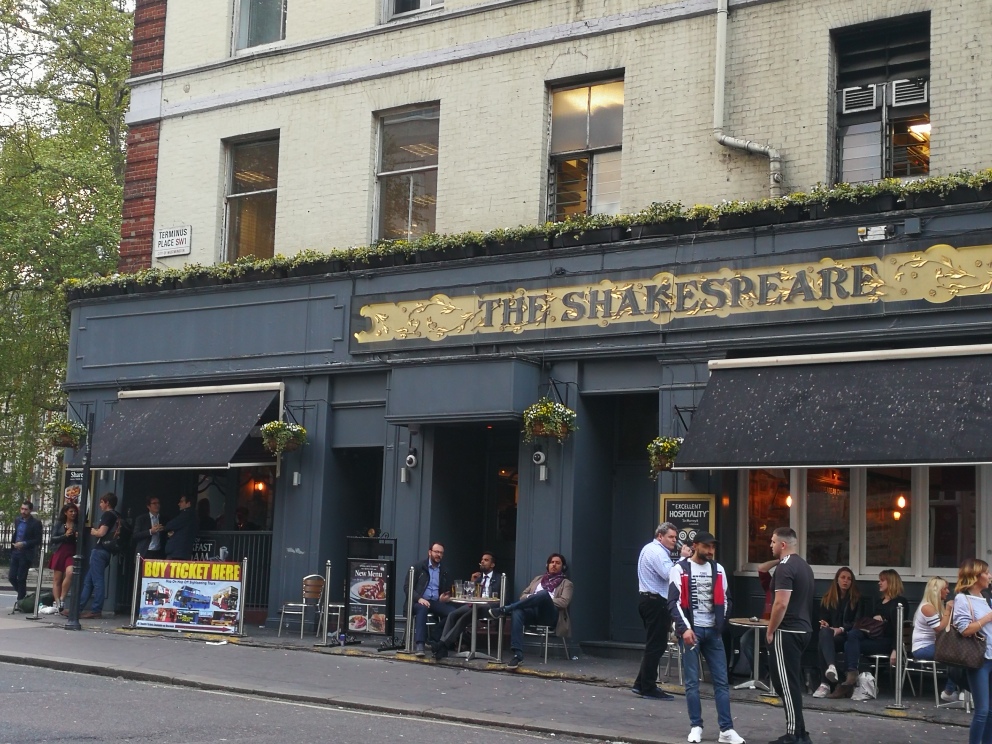 Back to the pub. I arrived at London quite late in the evening and I was hungry. Saw this pub and thought it would be too touristy since it is next to the station, but after counselling with my stomach we decided to give it a try. Indeed it was touristy but saw many local people and this is usually a good thing. I ordered a “Stake and Ruddles Ale Pie”. The catalogue describes it as prime British beef in a rich ale gravy ( sauce ) encased in short crust pastry. They served a small jug of that gravy to dip things into it. They also served boiled vegetables and mashed potatoes. Finally, I got a small pint of Foster’s which is nothing to really talk about. 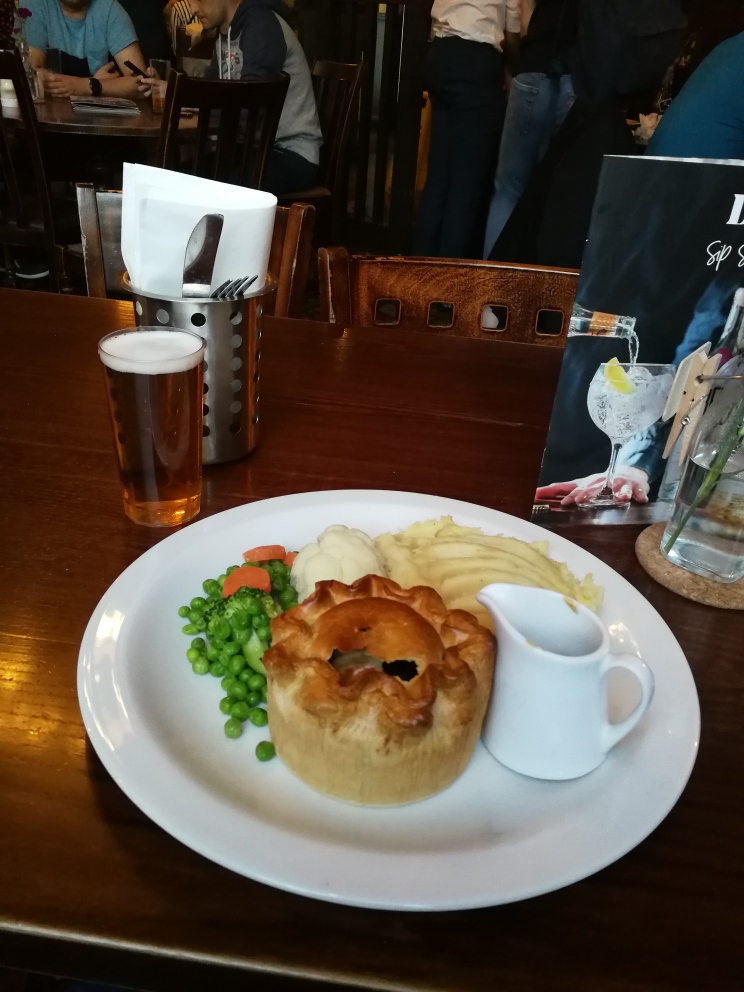 Generally the food reminded me the old Domino’s ad. “Hot and fresh …” . Never said tasty or high quality. More or less that was it. The mashed potatoes were made from powder, it was like eating plastic without any particular flavor. The vegetable were ok. The ale sauce was salty and had a quite bitter aftertaste, but I liked it. The pastry of the pie was cooked right and it was crunchy. 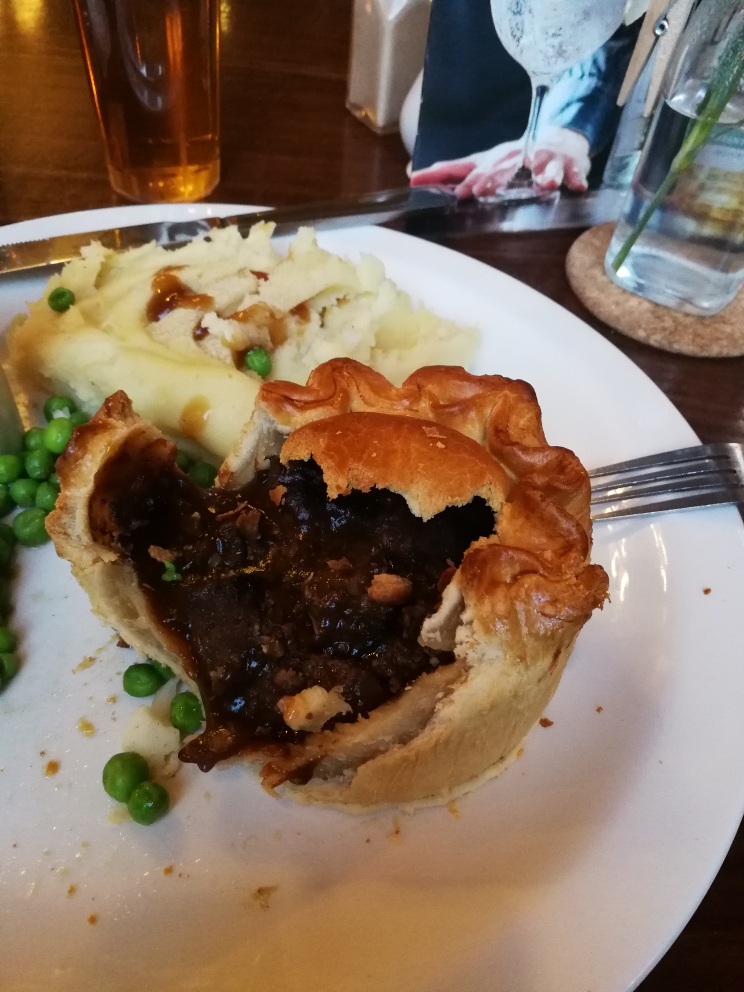 The meat was ok , even though I am sure England has better beef to offer. Overall it was just an above average meal.

After a couple of days I went to a pub near Earl’s Court station called “The Earl’s Court Tavern” . Who would have guessed the name… 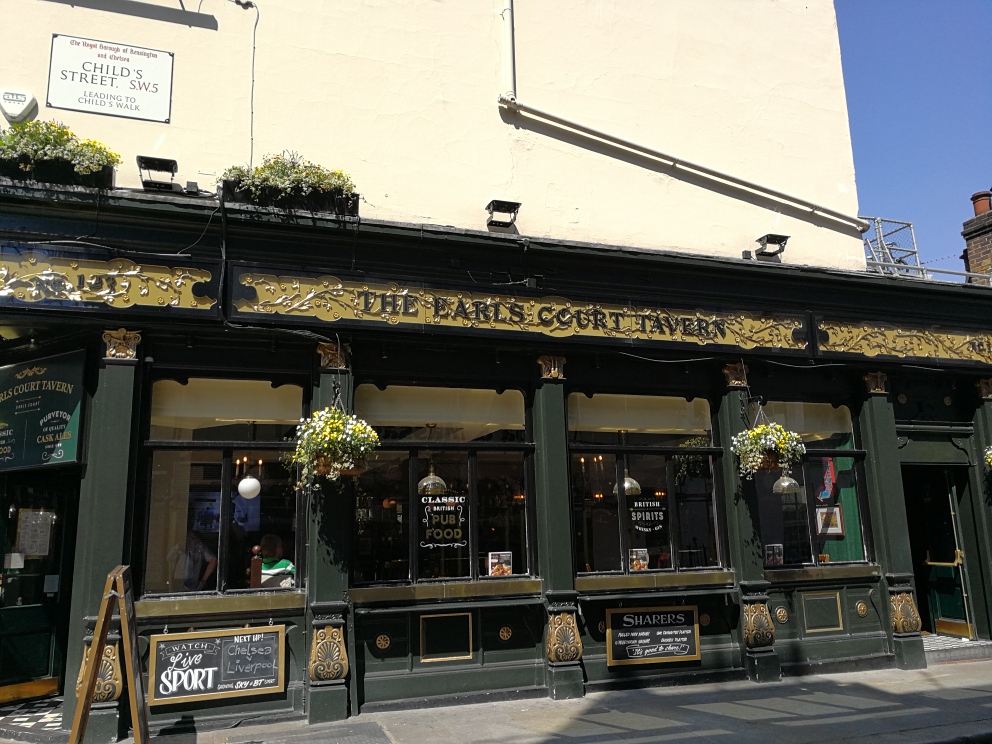 It was Sunday and there was a football (soccer) match on the telly, but the teams involved didn’t draw much attention from the people that were there, even though they ordered beers and occasionally looked at the screens.

I ordered “Hunter’s Chicken”, which is grilled chicken breast topped with cheddar and BBQ sauce. It was served with onion rings ( two in number ) , chips ( French fries ) and coleslaw salad. In Greece, this salad is called Kipourou ( farmer’s salad ). I also took a small pint of Camden Pale Ale. Let me start from the beer. It was excellent. Strong taste and strong smell. You could smell it halfway before it reached your mouth. Golden body with a small disappearing white head. Refreshing, fruity and bitter. Loved it. 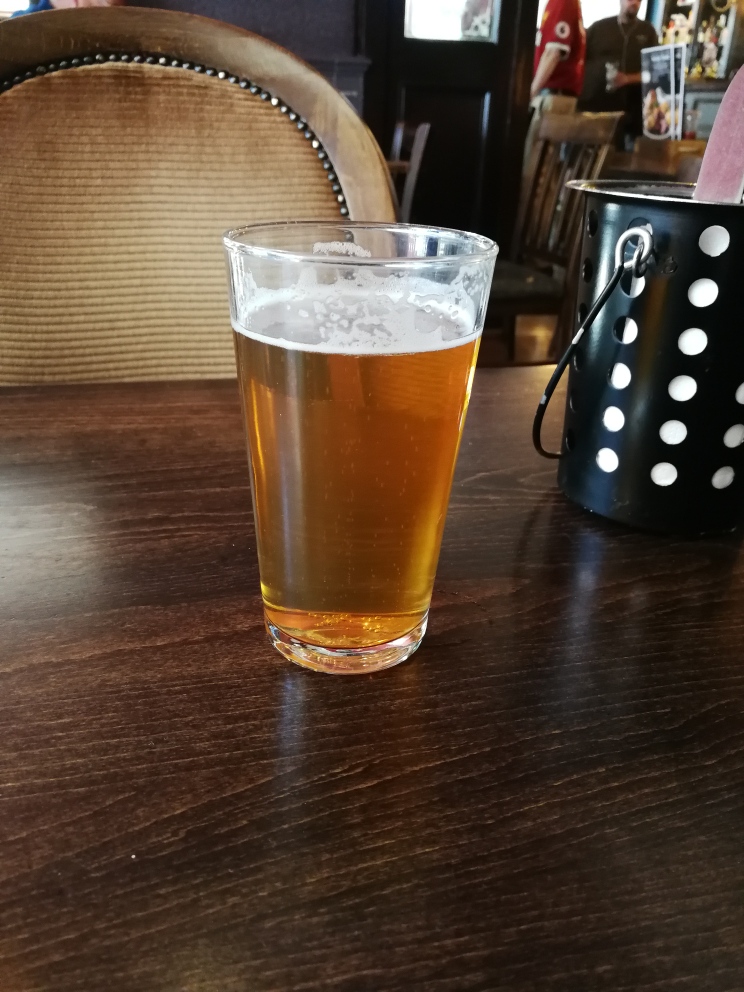 And the food was very good.

Coleslaw salad was typical, nothing to brag about. Fresh vegetables were ok and onion rings were acceptable. The fries were very good. Although, obviously pre-fried they were large, golden and crunchy. If you gonna have pre-made food at least get good quality.

I was impressed by the chicken. Perfectly cooked tender and juicy. It kept all its flavor and it was one of the best chicken breast I’ve ever had. 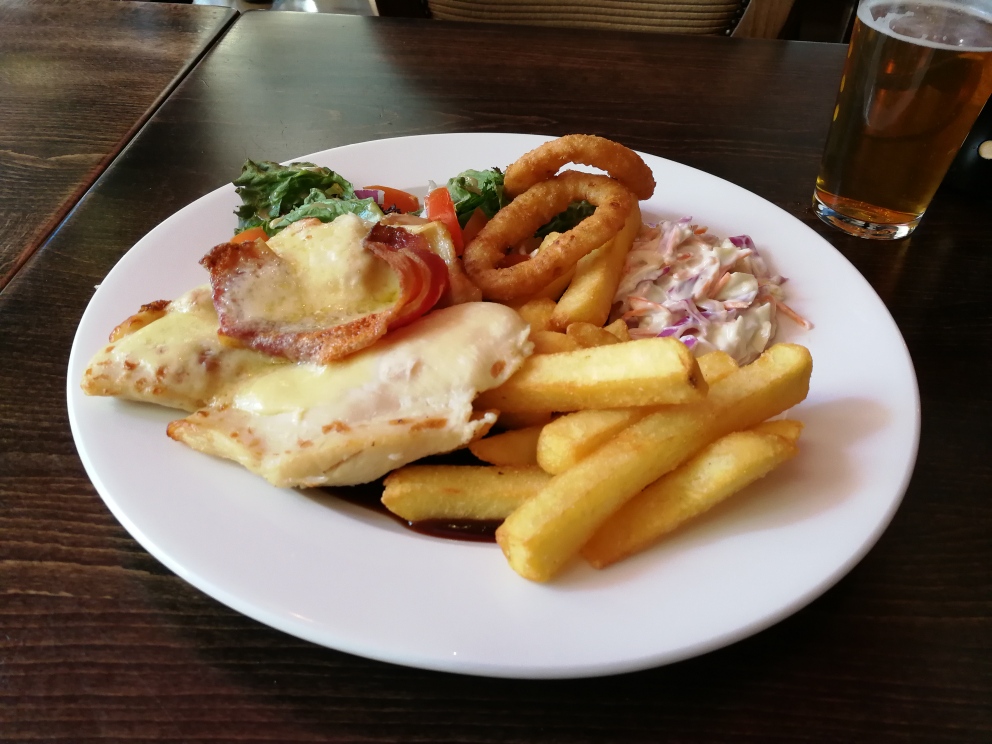 And one more thing… English bacon is exceptional. I could eat British bacon and ham and nothing else for the rest of my life. Great stuff …

That were my London Pubs Food Adventure. Before closing I noticed something and I am curious to find out. In both pubs they had the exactly same food catalogue. I am not sure if I happen to choose two pubs operated by the same company or if anything else is going on. If anyone knows let me know , too.

And until the next food adventure…
Be Healthy, Smile and Steem. The force is with you! You got a 18.60% upvote from @steemyoda courtesy of @alizafatima99!

We lived in the UK for a number of years I love the pubs they are so great for families.

Yes, I saw families, especially in the second one.

First thanks for sharing about your experience. Both pubs you mentioned are managed by the same company "Greene King" And by the look of the pictures unfortunately you visited drinks orientated pub not a foodie one. from what i can see everything is brought in , chips is blanced and frozen , was it mushy in the middle ? mash from powder ? how hard is it to mash a real potato ffs , gravy from powder , onion rings also brought in frozen , pie i can tell you for sure its not made in house also has been cooked, frozen and reheated to order, coleslaw also brought in you can see the same one in every supermarket, Hunters chicken is normally stew different nationalities have different version of it but definitely not a grilled breast. by the look of it looks like it has been steamed or boiled in advance that would explain why its juicy. Im sorry you did not get to enjoy a real home made with love British food.

Thanks for the info. I suspected they both belonged to the same company.
Now, I have to return to find a real foodie pub . :)

i so love those British pubs so fun to be there

Indeed, people seemed to have fun there.

That is a tasty pint. Must be some better pub food about though. :)

You should visit docklands , i am sure you will love the place.

Now , I have to return to visit docklands and find a proper food pub.
You people put me in trouble I don't want to go into ... :)

I know that you are a connoisseur of good food. I hope that visiting the pubs did not disappoint you too much? I want to believe that the impression after visiting London as a whole remained excellent!

I loved my visit at London. My expectations from the food weren't high so overall I am pretty happy.

I am very glad that you were satisfied with the trip!

Wow cool! !! To fly to England is my dream! I want to platform 9 3/4)))). And of course just take a walk around the city))). And on the way to drop into the Baker Street). Thank you for conveying the atmosphere of the city)

I wish you visit it , sooner than later :)

Congratulation iliasdiamantis! Your post has appeared on the hot page after 62min with 30 votes.

You just received a Tier 0 upvote! Looking for bigger rewards? Click here and learn how to get them or visit us on Discord
$0.00
Reply