How A Stranger Can Change Everything - Morocco

While working in Morocco, I had the opportunity to take some time off and explore the country. I had already been in Tangier for a month and had barely seen much else so I was eager to hit the road. Part of the plan was to see Rabat, the capital of Morocco, as well as Fez before heading back up to Tangier and hitting Chefchaouen on the way back. I would have more time off later but this would certainly satiate my appetite for now.

It is 153 miles (246km) from Tangier to Rabat so I decided to take a train. This would give me a chance to read and see the countryside along the way. After a couple of days in Rabat, I was sitting in a café trying to decide on how best to get to Fez, my next stop. As I was sifting through my options, a man sitting next to me, struck up a conversation. He asked why I was in Morocco, how long I had been there, what I thought, and where I was going next. We must have talked for well over an hour and drank way too much coffee. After he found out I was an archaeologist working with a team to locate Roman shipwreck remains, he asked if I had been to Volubilis yet. 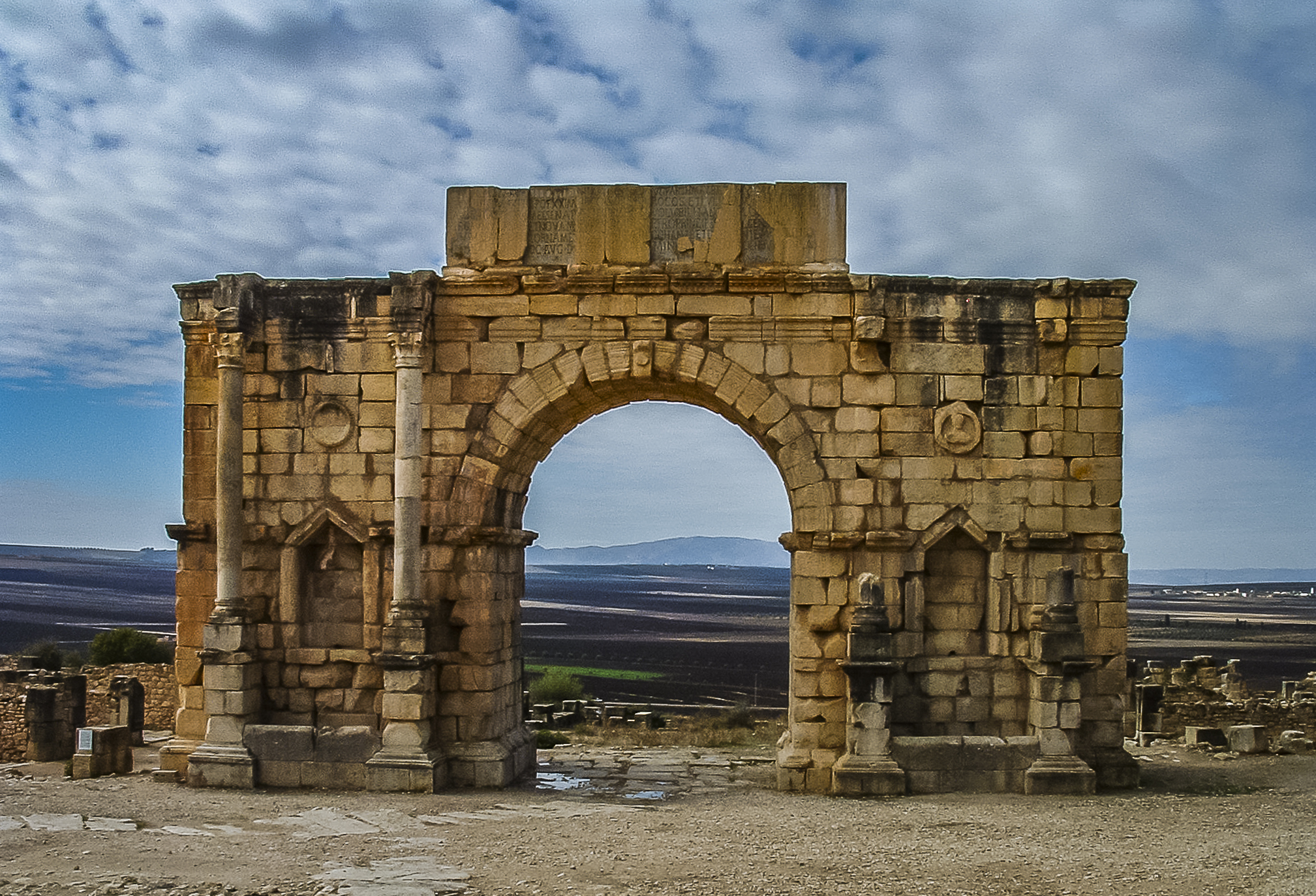 Once considered the capital of the Roman-Berber Kingdom of Mauretania, Volubilis (34°04'16.0"N 5°33'13.0"W) was built below the Zerhoun mountains in a fertile flat green plain. Although the original settlement of Volubilis was built around the 3rd century BC, it was not until the 1st century BC that it came under Roman rule and began to truly prosper. At its height, Volubilis was home to over 20,000 residents. It was during the Roman occupation that the city gained, a government basilica, a central forum, and a triumphal arch. The arch was dedicated to the North African emperor Caracalla. My new friend then proceeded to explain that Volubilis was not far and would not be too much of a deviation from my route from Rabat to Fez and that I should stop by. He said it would be well worth my time. At that, he stood up, paid for my coffees and left.

Since I had forgotten my Moroccan travel guide, I was left to determine what, "not too much of a deviation" actually meant. I knew that Meknes was about 90 miles (144km) from Rabat and that according to my new friend, Volubilis was nearby so I just had to get to Meknes. I had seen a bus station earlier in the day so I headed over to purchase a ticket. I even asked if it was easy to get to Volubilis from Meknes and was assured it was. 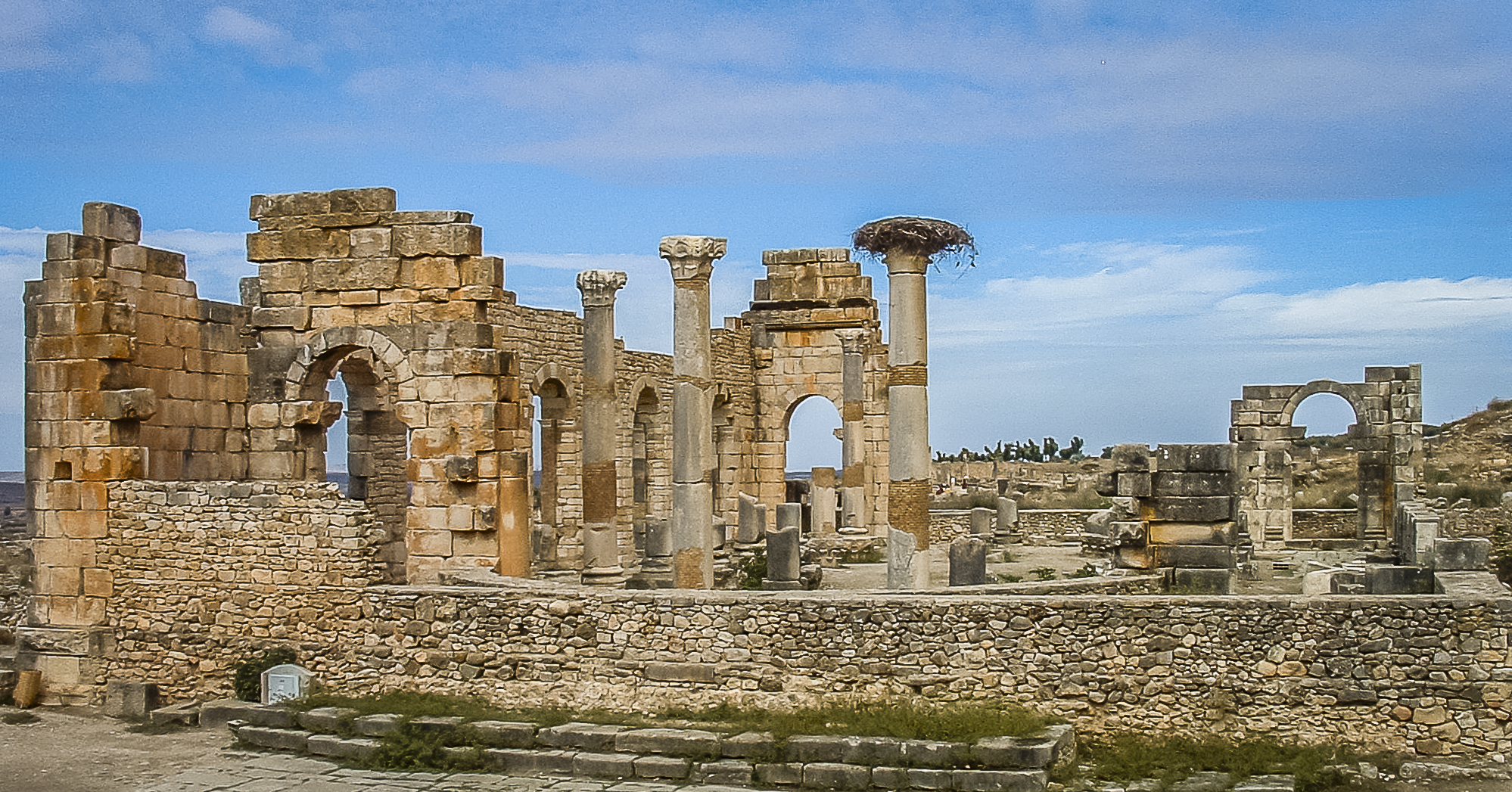 The next morning, I packed up and headed back to the bus station to board my transfer to Meknes. The trip east felt much further than the short distance I knew it to be. The bus was uncomfortable and apparently had no air conditioning and the windows were all sealed shut. To say the least, I was very happy once we arrived in Meknes and I could stand up and get off.

I wandered around Meknes trying to decide how I would get to Volubilis. My friend from the coffee shop indicated that it was not far so I imagined a short hike was in order. I found a hotel where I could leave most of my belongings and asked which road I should take to get to Volubilis. The hotel staff's reaction should have sent up a red flag but it didn't. They asked if I planned to walk and after I confirmed my intentions, they laughed and pointed to a sign that indicated the road to take. Let's be clear, Volubilis is close if you are driving but since I planned on being back in Meknes in a few hours and on another bus the next morning to head to Fez the short car ride would have made perfect sense but when I changed my plans and decided to walk I had thoroughly changed the "not too much of a deviation" plan. So, it was about 10:00 am and I headed out. I had my camera, a couple of snacks, and some water. Everything I would need to be gone for the afternoon.

So, Volubilis is actually 20 miles (33 km) north of Meknes. Like I said, a quick trip by car but not on foot. The 40 minutes it should have taken me if I had thought about what I was doing actually took just over 5 hours (one-way). At first, I really didn't mind nor did I understand the error I had made. I just kept walking, taking photos, stopping every so often to write in my journal, and on and on. A few buses passed by, cars too, but I just kept walking. It was not until I was about 3 hours in that I started to think I had made a mistake and was realizing that for every hour I walked north, I would have to walk it again south. This was also the point when buses and cars stopped passing by as frequently. I was now pretty much alone in the Moroccan countryside with very little water, no more snacks, and no way to communicate with anyone. So, I just kept walking. 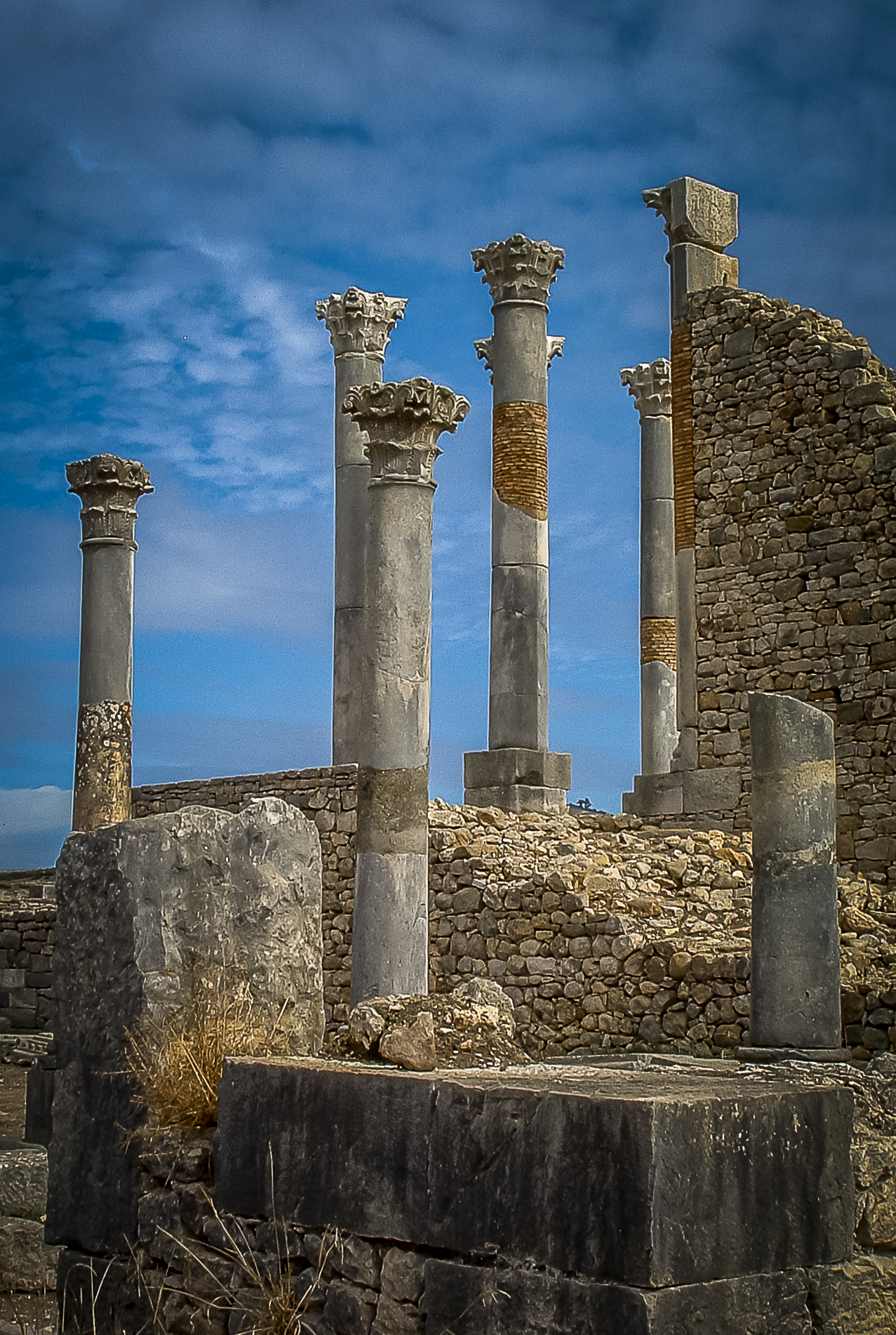 Finally, I reached a town called, Moulay Idriss Zerhoun. I found out later that it is one of the holiest sites for Muslim in northern Morocco because it is where Idriss I arrived and brought Islam to Morocco in 789 AD. Here I was able to replenish my supplies and I also checked on transportation back to Meknes. I was in luck, there was a bus leaving later that evening giving me plenty of time to check out Volubilis before needing to head back.

Wanting to maximize the remaining time I could spend at Volubilis, I grabbed a cab for the last 3 miles (5 km). Upon arrival, I saw there was no one else there. There were no buses or cars in the parking lot and I did not see another human being around the remains. At first, I thought it might be closed and was starting to get really frustrated with myself but then a small man emerged from behind a building and walked up to me.

I was told the site was about to close and that there would not be enough time to visit everything. I was hugely disappointed considering all that I had put myself through to get there. I explained to the man what had happened and that I had walked most of the way from Meknes. At that, he laughed, actually, he snorted at me. That made me laugh as well. He then just said, "OK, OK, let's go. I will show you around."

He took me to every single part of the site. He talked to me about everything. He did not leave anything out. He was extremely kind and even after the site was supposed to close and he was supposed to go home, he stayed with me and made sure I had plenty of time to take all the pictures I wanted and ask all the questions I had. It was awesome. 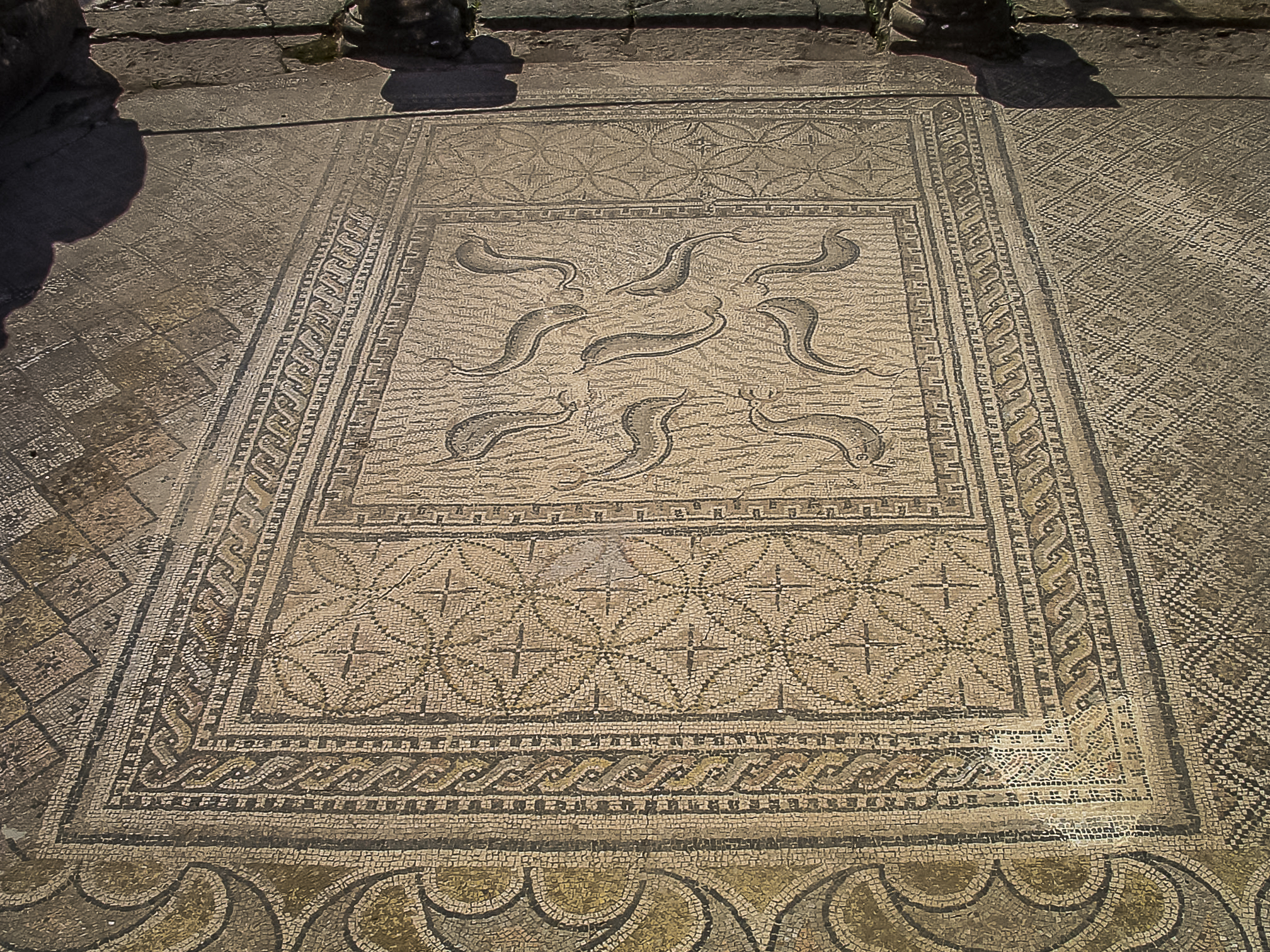 After dinner, as promised, I was taken to catch my bus. Then less than an hour later, I was back in Meknes and back at the hotel where I had left my belongings. This was 12 hours after I had left and about 5 hours after I said I would be returning. When I walked in, I knew I was filthy and covered in dirt and probably smelled horrible. Some of the same staff that had seen me leave greeted me with laughter and big smiles. They could not believe I had walked and had expected me back much sooner thinking I would have given up the walk once I realized the distance. Now it is easy to laugh and only see the best parts of the story. There were times when it was happening when I was angry and frustrated with myself. Now though, I can see the humanity in it all. The kind people, the hospitality, and the experience will always be some of my fondest memories of my trip to Morocco.

All Content and Photography is Original.
Enjoying my content? Please help support my efforts by resteeming.
Thanks So Much - Liquidtravel