Bunhwangsa Temple in Gyeongju, Which was built in Shilla Dynasty.

I’d like to introduce you Bunhwangsa temple built in Shilla dynasty.
It was recorded that this temple had been built 634 AD at the reign of Queen Seondeok.
One of interesting thing in Shilla dynasty was that the Queen had reigned her country.

I can’t remember the Queen reigned country in ancient ages.
I think it must be very rare case.
But there were several Queens in Shilla dynasty who directly had reigned her country.

I’d like to have a chance to post on the Queens in Shilla dynasty.
Except Shilla dynasty, there were no such case in Korean history.

Bunhwangsa had been built in 3rd years of Queen Seondeok.
Bunhwangsa was one of the largest temple in Shilla dynasty.
It was a center of Buddhism at that time.

It had been recorded that Bunhwangsa was very large scale.
But it had been destroyed twice in history.

After the war against Mogolians, the temple was reconstructed, but the scale and size was not so large as before. Gyeongju was no longer the capital.
Even though Goryeo kingdom had believed in Buddhism as national religion, they couldn’t repair every temples destroyed in nation wide.

Second destruction was by the invasion of Japanese in 1592 AD.
Bunhwangsa temple was totally destroyed by Japanese Army.

The current building in this temple had been built after the war against Japanese. Now there are two buildings have historical meaning in Bunhwangsa temple.
One is the main building for pray, and the other is the pagoda.
The pagoda was only original Archiecture of Shilla dynasty. I’d like post the pagoda next time.

It looked very old as seeing at once. It was not permitted to take the photo of inside.
It was a pity that there were very precious sculpture of Buddha inside.

So I took the pics of the building which had the characteristics of Choson Dynasty. 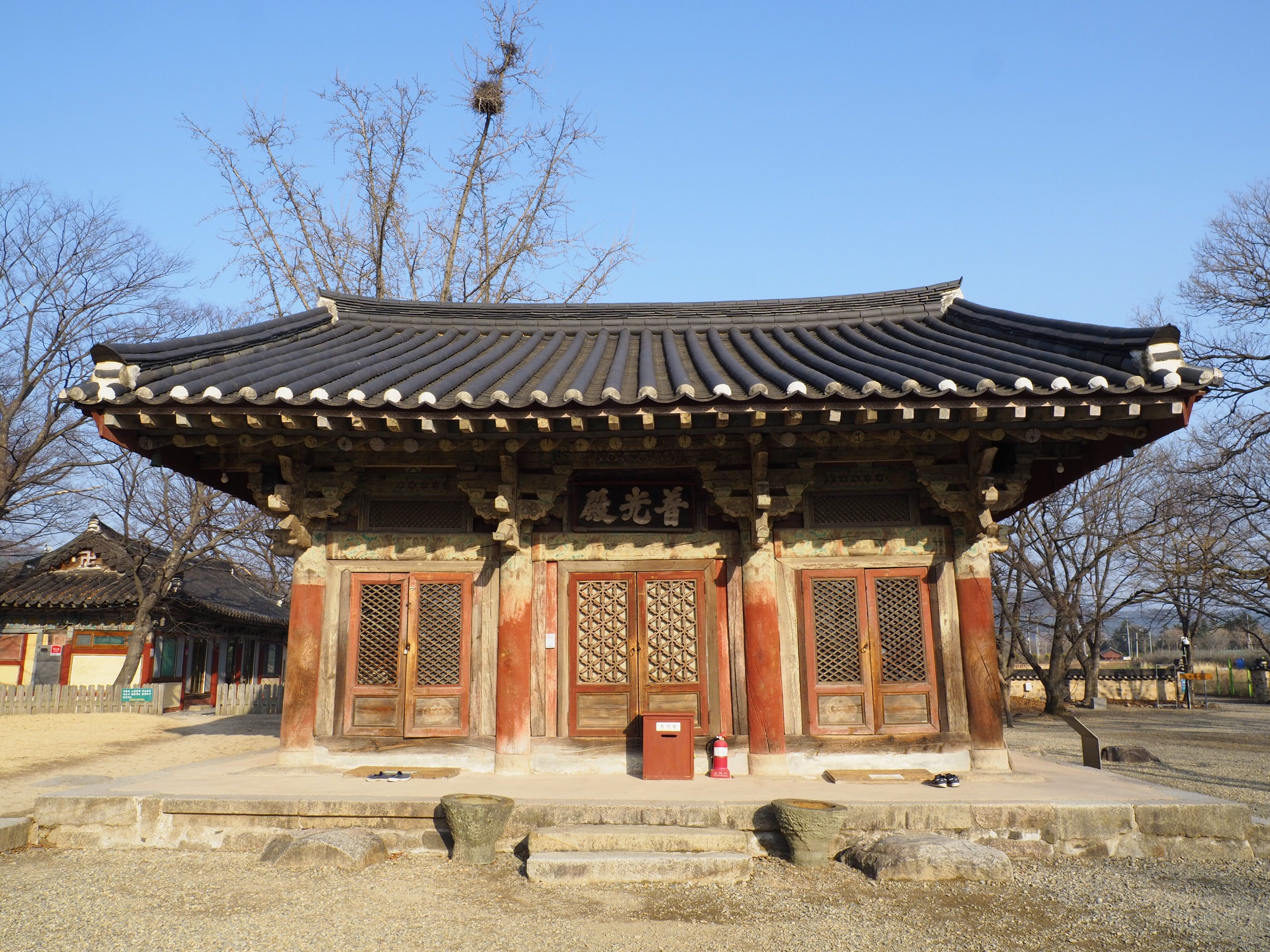 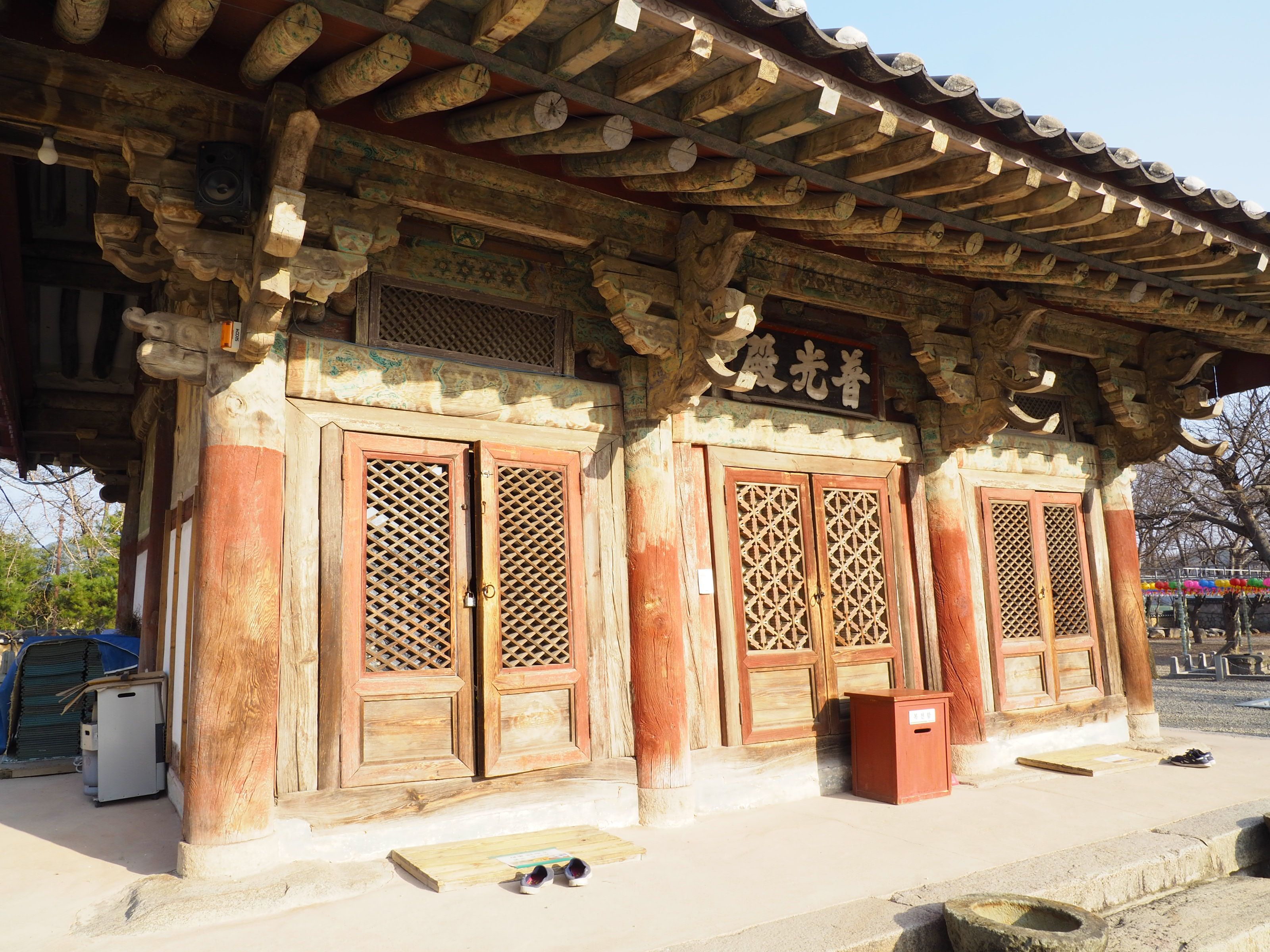 Around the building, there were some stone relics of Shilla dynasty.

Below was the stone well which was very well preserved 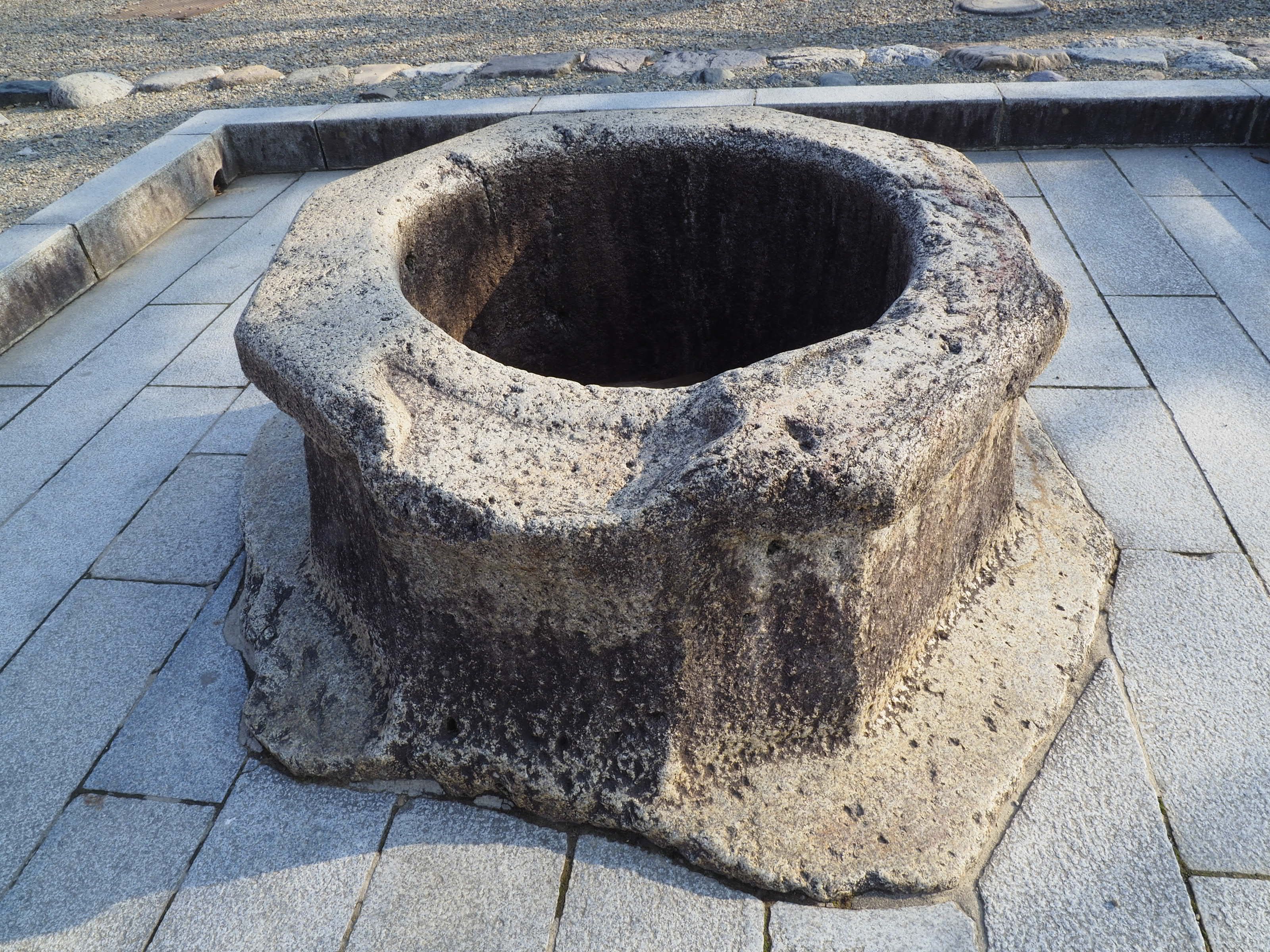 Along the wall, there were lots of stones which must had been the parts of the building. 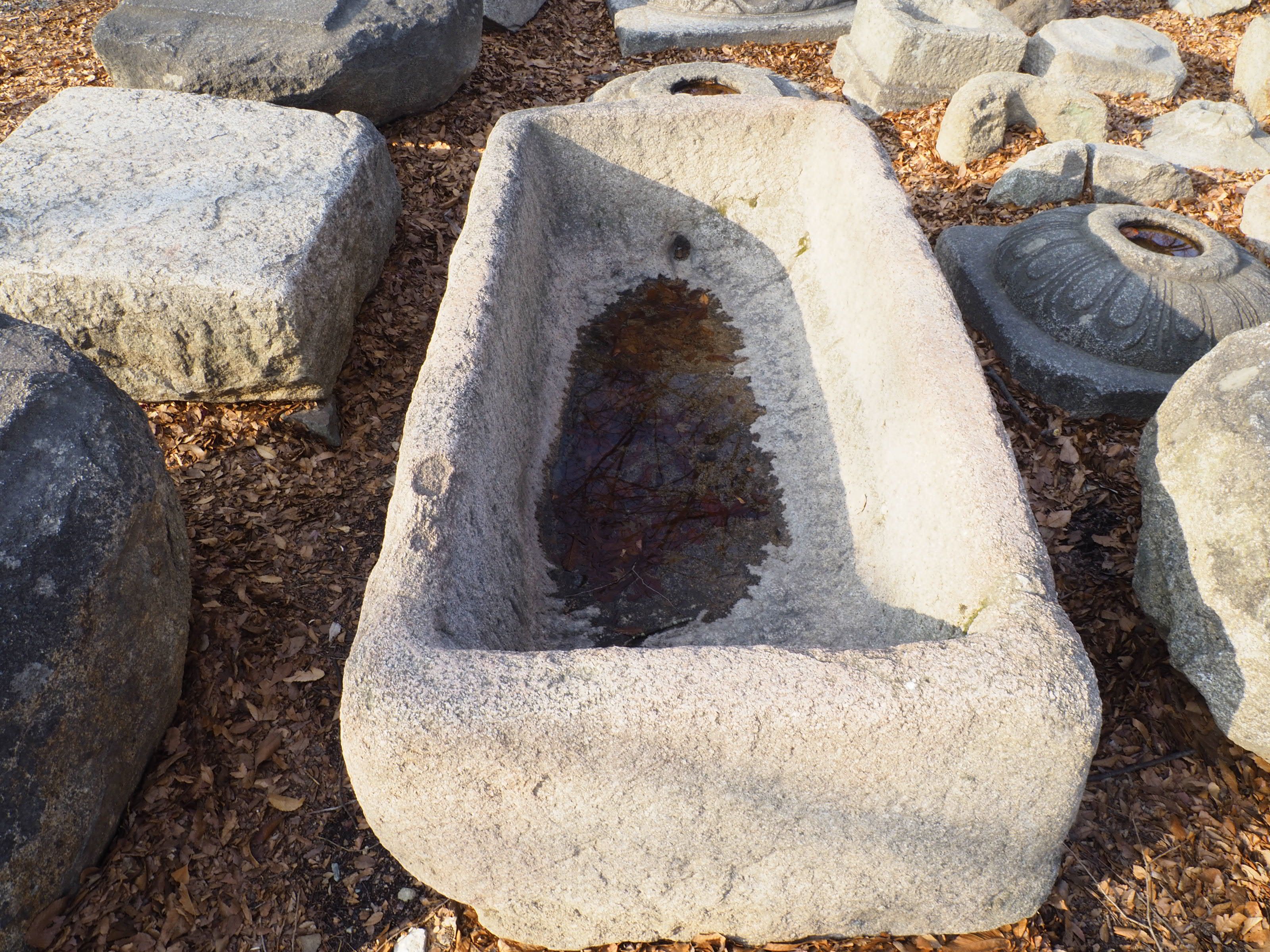 When looking at the stones by the wall, how the destiny of fallen kingdom is sorrowful.

Sitting on the stone, I had imagined the glory and the misery of History.

Thank you for reading.

I find the construction of these temples very beautiful. They are places that, when I have money, I will certainly visit. I have a lot of interest in knowing the culture of those who built these temples and what their lives were like at the time they built.

The film "Ultimo dos Samurais" shows Americans' view of the samurai and the difference immersed in this type of culture where values ​​such as loyalty, honor and respect are more important than the financial issues of the Americans and Japanese more linked to the urban part Japanese.

wow an impressive commentary @cryptopie, hope that the temple will also follow the steemit and read it for renovation, so it looks more beautiful.

Everything has its time limit, whatever it is living or inmate, good or bad ,mighty or week. Every thing is just passing through timeline and when there time is over they became History.

Periodically we should disappear from the radar. To go so far where no one can find us. Hiding in the woods, where the fern blooms. To hide in caves where crystals glow. Hide in the cities, where the houses have a soul.
Much in the way do not take it. A guitar, a bottle of wine, a beautiful dress and a passport. Jump on a train or a ride and disappear for a while. We'll go back with a different pattern on the pupils. After all, no escape is not easy.

Really its true line
(The world is a book, and those who do not travel read only a page.)
Keep enjoy dear your life.

Beautiful pictures and lesson in history. One sad thing is that human race has not changed much - still very destructive, only now it's everything is a target - people place, sea, weather .....

A gorgeous temple with historical stories is really wonderful

wow relics of the Bunhwangsa Temple in Gyeongju, built in the Shilla dynasty. It is so extraordinary and global that the inscriptions are still well preserved, though this silla belongs to the interior of gyoengju.
although this temple can show unity among tribes in the area of silla. and this silla symbolizes your very popular post about this kingdom.
good post @slowwalker and incredible upvote survived from @adnan-mp.

Thank you for your good explanation

oh thats the matter
well m sorry i am not able to give a +comment because i am muslim
and i don,t beleive in temples mandir and something like that i have just beleive in ALLAH and ALLAH said ican see everything even a little ant so if ALLAH can see us then y should we go a special place for our worship? i know you can,t understand
amd i m also weak in english but m new steemian if u agree with me then support me

no problem
It is just an old stuff.

oh ok well m from pak and u?

Wonderful your traveling....I appreciate this photography.keep it up my dear friend....

the temple is very sturdy and strong. very beautiful @ slowwalker.meskipun dudah aged very lama.tetapi still very indah.dan have many history of civilization owned by this temple.postingan very nice history, add my insight about history.i am upvote and resteem your post @slowwalker

this is one of the most beautiful historical legacy and interesting to visit. thanks to your post @ slowwalker I became aware that there is a place of history as good as this.terimakasih for a very good post. korea mrmang have a lot of history. i have upvote and resteem your friend's post

beautiful trip @ slowwalker, I really like, hope you are always happy
I Will upvote and restem

Its really beautiful. I hope i can visit it someday

It really makes me sick how war destroys everything! Looking at the architectural aspects, if there were no wars in the past, imagine how many constructions would have last up to date! Luckily there's always people trying to rebuild and protect what's left... so much History would be lost without their effort!

Thank you for your sharing

Wow. I don't know what I'm more thankful for, the history lesson or the absolutely amazing images!

i have never seen such beautiful temple. I apprciate effort of @slowwalker who took brilliant images and gather historical moments about this temple. Seriouly let me say that best post of the day

Glad you took some close up of the wood and stones. That was what showed the real age of these items. It's fascinating to think people worked on and with these items so many 100's of years ago. Simple but oh so interesting to see the remains.
Frankly all we leave behind these days is rubble and trash.

very beautiful and very historic photos ,,, this is very classy and irreplaceable ,,, you are a person who is very concerned with the values of history. I can feel how the atmosphere in the past ,,, as if carried over the atmosphere of the past ,,,
thank you for sharing the infinite value ,,,

Is the wood on these temples replaced bit by bit over the centuries or does it last all that time?

One of the coolest accounts i've seen yet! Steemit is full of surprises I tell ya!
So fascinating, amazing writing and shots.
Cheers, from another history lover
Evan

I love this post, wow really very nice, amazing, @slowwalker ,,, and i want to capture it, atou share to all PEOPLE

Thank you for the history lesson. I really like the wooden details on the door.

That's a great historical piece of the past!

This coverage of the case is really very special. They were very good artisans, with a lot of technique and imagination

@slowwalker the important thing is that when it was built it acomplished the reason for its construction. Now we try to imagine how it looked like.

I love this kind of content because it teaches me many things, thank you for doing a wonderful job on @steemit

Beautiful pictures and great insight about the history of Korean peninsula.

Hello, come and see my today post about Russia

Very well preserved temples, congrats for the photos. Do you happen to know the name of the woods used to build them ?

Gyeongju is my favorite place.
Thank you for good post and wonderful pics : )

So much wisdom In old architecture

Love this... korea have a beauty and rich history... nice photos

Wow i wish one day i will go there :)

When Japan invaded, it destroyed the building. Destruction of culture is very sad and I am sorry as a Japanese.

Nice information/ history and lots of amazing pictures.. Love and respect from Turkey..

thank you for showing us those photos of the temple, it makes us go back in time

Wonderful your traveling....I appreciate this photography.keep it up my dear friend....