sportsenthusiast (49)in #travel • 4 years ago

The day I leave for Iceland is finally here… YAY!

I had been looking forward to this trip for so long! I hadn’t left the country in quite some time and was seeking to go an adventure.

My flight leaving out of Toronto was at 9 PM and it was roughly a 5-6 hour flight to Iceland. I got to the airport around 7:30 PM to find out my flight had been delayed 4 hours! What a lousy start to the trip I thought. I quickly texted my cousin who I was going to meet in Iceland and he said his flight out of Chicago was delayed just as much! Apparently, it was terrible flying conditions near Iceland. With a lot of time to kill at the airport I managed to get into a lounge with a benefit from one of my credit cards. I hung out in there until my flight was boarding and I was off to Iceland! Not too bad I thought!

With the time difference, I ended up landing in Iceland early morning and met up with my cousin and one of his friends at the airport. We had a shuttle waiting at the airport to take us to the car rental spot to pick up our BMW SUV! We figured we’d be doing a lot of driving so might as well upgrade the rental car from hatchback to a luxury car.

Here’s a shot of us driving to our hostel after picking up our rental. Yup those mountains are real. 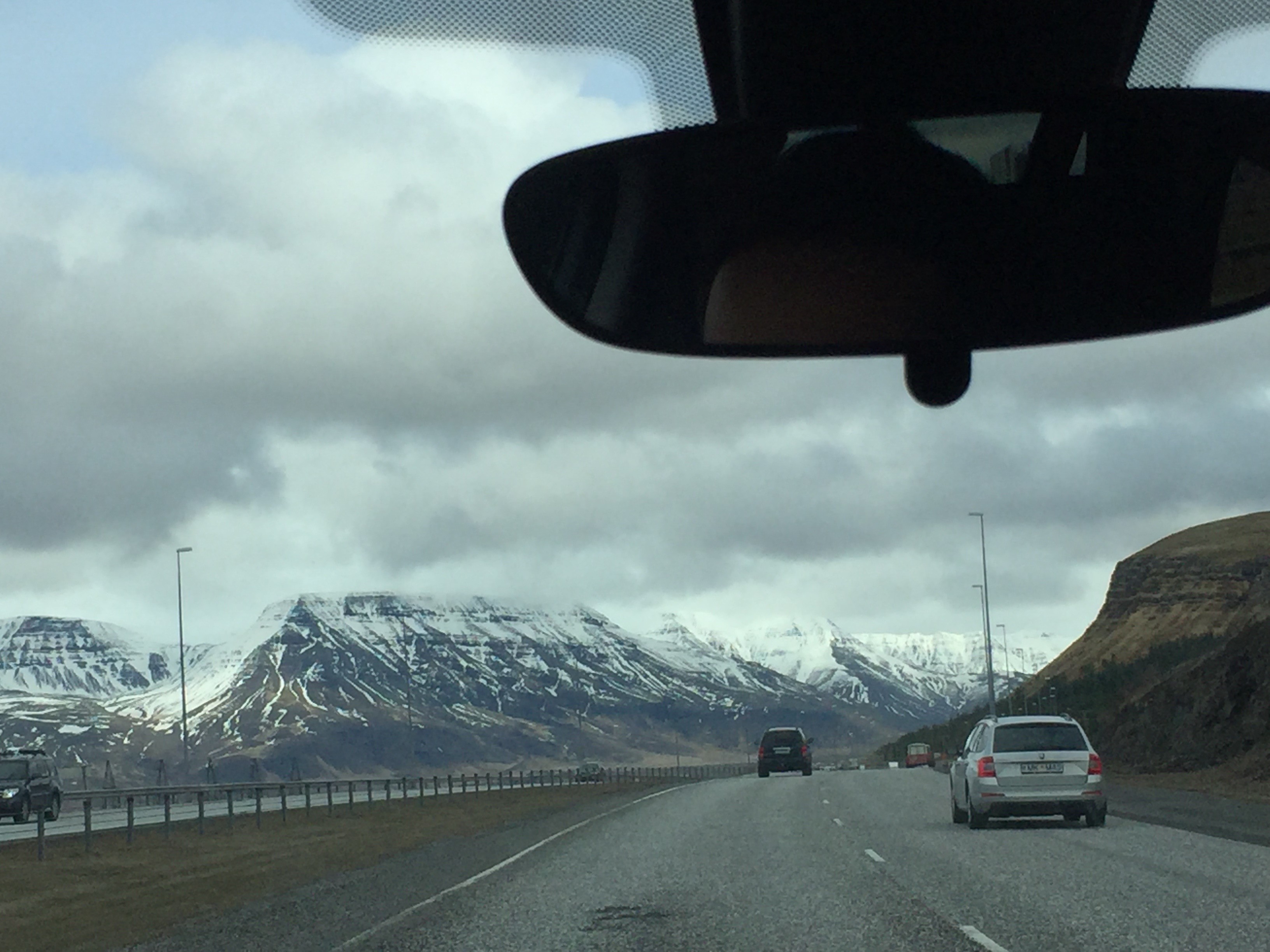 All of us were pretty tired as we were driving into Reykjavik. It was a beautiful and scenic drive into the heart of the country. We checked into our hostel, dropped our stuff off and headed right back out again on a quest for food. After walking for about 20 minutes we decided to hop into Noodle Station to order some food. I would say the food was okay but not the greatest. It was roughly $20 USD for a proper serving of noodles… And none of us were able to finish what we ordered (and we all claimed to be starving). Usually when I’m spending $20 USD on a meal I’m going to finish it.

At this point we were dead tired! We decided to take a nap to recharge for our night adventure and ended up sleeping until 10 PM! We thought we had wasted the night but as soon as we got outside it looked like it was bright enough to be 6 PM! Lots of people still walking about and very lively in the city. It really didn’t feel late at all.

We ended up going for dinner at a pizza/kebab restaurant. It was much better than lunch (sorry Noodle Station) and we were all charged up to go bar hopping. We went into a few Western bars which were fun… I still remember walking into one of the bars and my cousin’s friend Zach started singing Take Me Home by John Denver with the entire bar! It was absolutely hilarious haha! It doesn’t get any more American than that my friends!

Much later into the night we stumbled upon to what turned out to be a brothel… I don’t quite remember how we got in but once we were inside all three of us knew where we were! We tried to politely leave but the ladies were very persistent and basically blocked off the entrance door! My cousin who is in a committed relationship thought it would be funny to redirect all of them to me. We finally made it out without going “upstairs” and started talking to a few bouncers across the street. They told us that brothel takes people for their money! They don’t tell tourists how much their services cost and then force them to take out all of their cash from the ATM. We weren’t sure how true this is but he said he’s heard people get taken for thousands. We also thought maybe he was lying because his girlfriend worked there? We didn’t know what to believe!

At this point it was about 3 AM and we were hungry again! We saw a Subway open and decided to all get sandwiches before we head back. We ended up paying $40 USD for 2.5 foot longs… No drinks or chips/cookies… Just the sandwiches. I knew Iceland would be expensive because everything needs to be imported there but I didn’t expect this much! We gobbled down our food and headed back to our hostel. We were all pretty tired from the flight and ended up crashing as soon as we got home… And just like that Day 1 was complete!

The next morning, we had planned to go on a hike at Glymur. It was about an hour drive from our hostel in the city all the way to Glymur. We ended up parking and asking some tourists for help on which direction to start our trek. They guided us through a cave and then up a few cliffs. The cave was particularly interesting and I was able to get a shot of us reaching the end of the cave. It was quite a long hike especially for me since I had not done one of these in a while. I was smart enough to pack my rain boots so at least I was relatively comfortable throughout the journey. My cousin came along in running shoes and boy did he regret it! Especially when we had to go through the some of the streams to get to the other side and continue our hike. The total climb spanned for about 3 hours and the view at the top was absolutely unreal.

Below is a Snapchat I took after we got to our highest point in the climb: 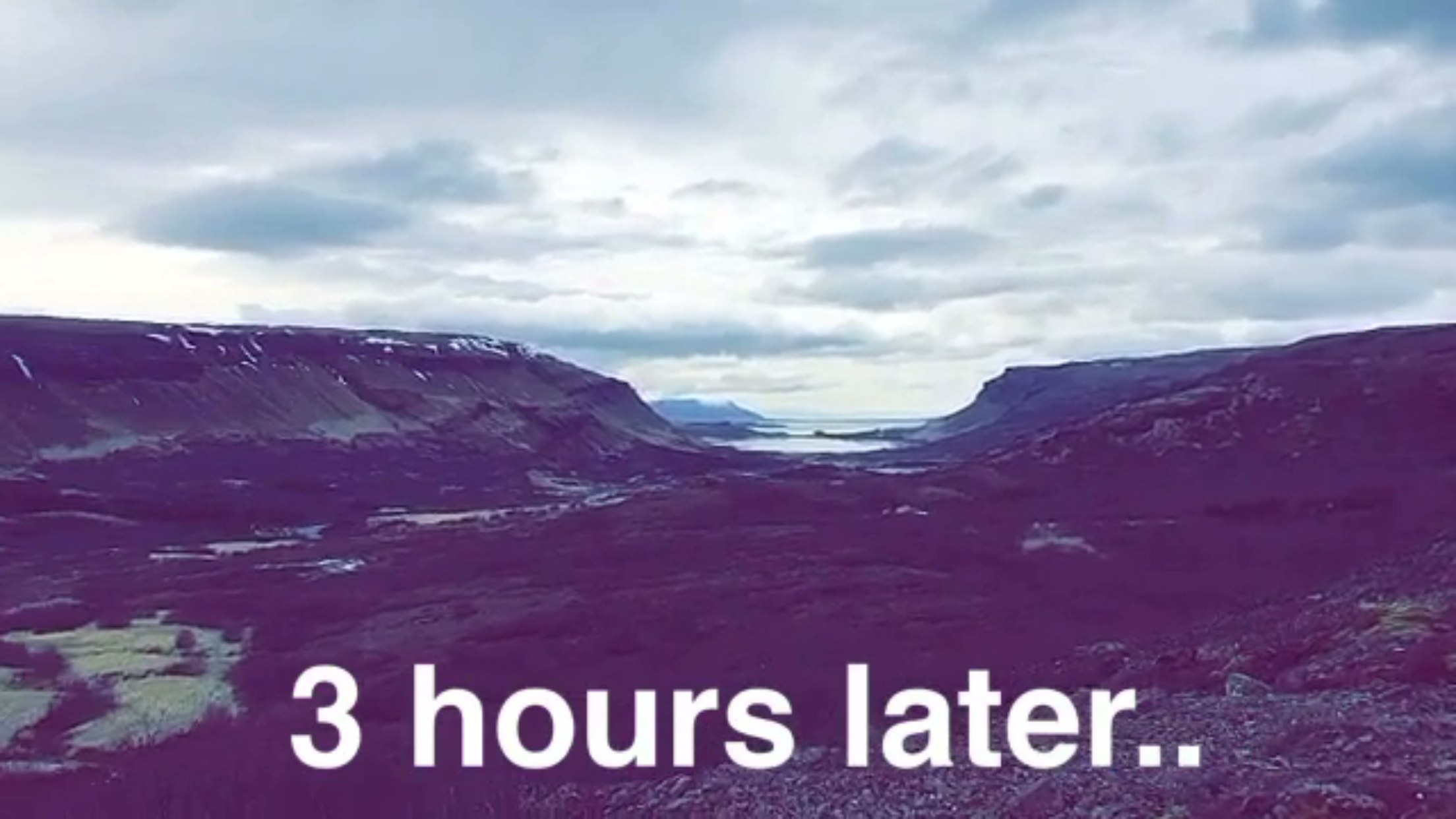 It started to get dark fast and we thought we might get caught in a rainstorm so we decided to head back down. At this point Zach was convinced he had heard a mountain lion so our speed on the way back to our car was unbelievable. I think at one point my cousin went into a full out sprint haha!

On our way back to our hostel we were looking up places to get a bite to eat. I found a place online that had great reviews called Reykjavik Chips. It was a French Fries shop with all of kinds of different flavors. We ended up going there and tried a few of their recommended choices. These were probably one of the best French Fries I’ve had in my life! It was very busy in the shop and you could tell why! I would definitely recommend trying this place if you’re ever in Iceland. They serve it to you in this cool box and give you a long tooth pick to poke into the French Fries. All their tables have small holes in them as well for your French Fries container to slide in so you can share with everyone at your table. Take a look at this image I found online: After we finished eating we decided to head back to our hostel and get some rest for our big day tomorrow. We had to hit up a lot of different spots in Day 3 and we needed our rest. Plus, we were all extremely tired from our three-hour hike.

Great tips! I've always wanted to go to Iceland so this is very useful!

No worries! Glad you found this useful!

Iceland was by far the most beautiful country I've ever been to. Agreed! The natural beauty in this country is unmatched.

For some of the places in Iceland it almost seems unreal.

YES ICELAND IS ABSOLUTELY POSITIVELY THE MOST BEAUTIFUL PLACE EVER.. thanks for appreciating.. ❤️
Have a great weekend ✌🏻🤗

Awesome! I Upvoted you on SteemFollowers, but I have no clue how it works! :-) I'm doing a very short one day stopover in Iceland on my way home from a month in Scotland in September. Next time, I hope my husband will be with me and we will stay longer. I'm just checking things out first. LOL!

Enjoyed your post very much. I'm looking forward to the next part, so I follow you :) Iceland is always on the top of my wish-list. I heard it's one of the most expensive place to travel. Looks like it really is... !

I'll be putting out one more post for the second half of my trip. Stay tuned!

WOW. Those pictures are beautiful, man. Thanks for sharing :)

No worries at all! I will be posting the second part of my trip tomorrow so stay tuned!

Wow, the natural beauty in Iceland looks amazing! Really wish I can visit one day :)

You will love it! I might have to join you on that trip haha!

Take Me Home by John Denver with the entire bar!

Thankfully you didn't lose a few thousand at the brothel to start off the trip, haha.

I'd be running too if I heard a mountain lion!

Thanks for reading buddy. Will be posting the second part of my trip tomorrow.