With any luck for Verge holders, this is not a case of "buy the rumor, sell the news."

Repeat after me - Gaps get filled, divergences get resolved.

In the past, I've written on Verge Coin (XVG) and how privacy advocates generally agree it has some technical problems. As far as I know, these have not been resolved, although a recent hard fork approximately 1 week ago today did update transaction validation in a way that resolved some related bugs. Active development continues and Verge is one of the older and more established coins around. It's probably not going anywhere soon.

The rumor mill has it that Verge will be making a "big" announcement about a "large" partnership on April 18th, just in time for the end of the US-tax-payment blues. Speculations are wide-ranging, and at the upvote-only Verge subreddit include both Paypal and Stripe as lead contenders. Obviously, either of these would be a large boon to the currency and would explain the recent strength as inside players position themselves for the public announcement (remember, again: buy the rumor, sell the news.) Others are guessing that the same-day announcement for Flipkart (an Indian shopping portal) is related.

Nevertheless, I am likely to use this recent strength (and any going into the announcement next week) to unload some of my stockpile. It's tough to argue that this is an imprudent move, given Verge has already retraced the majority of the way back to recent highs during "Crypto-Mania December, 2017" despite a Bitcoin price almost "2.5x less" than at that time.

This looks like precisely the adjustment in Bitcoin ratio I was looking for to lighten my Verge load. If, like me, you had this on your list of coins to reduce your holding of, now could be the time.

Gaps get filled. Divergences get resolved. 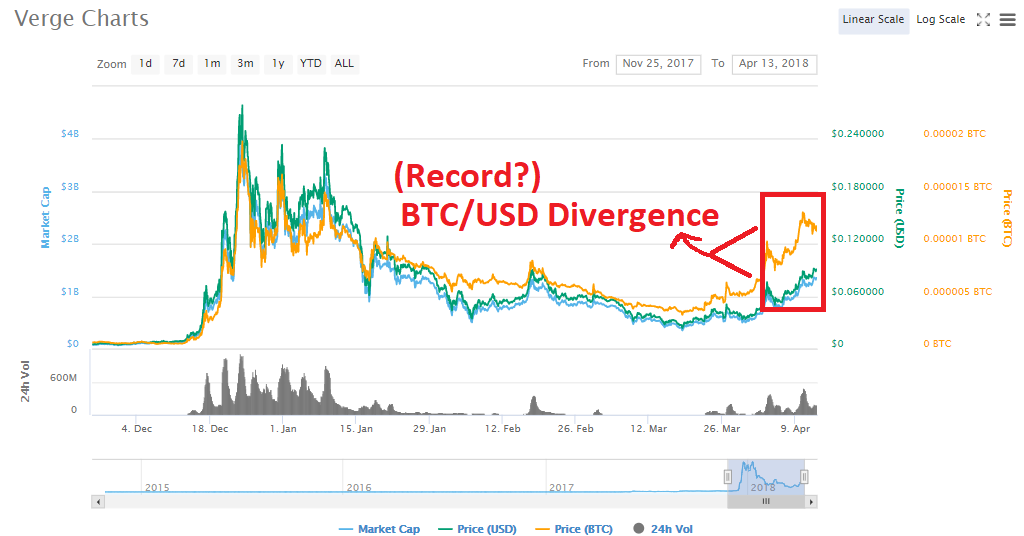 As always, the longer the time-frame on the chart you use, the more accurate your predictions will be in the long term. I took a look at the full pricing history on Verge, and though I truncated it to the last year on the below chart, I can confirm that yes - this is a record divergence, in absolute size, and is only potentially rivaled on a percentage basis by the May-July 2017 spike visible below: These really do (almost) always get resolved... and not usually with a "new paradigm".
Try SteemEngine and get rewarded for every follow or vote!
See my explanation of SteemEngine here.
Post via Busy.org for added exposure and upvotes from Busy!
See how to get extra votes from Busy.org here.

So are you saying to hold verge for the moment or sell ? I still have verge and I think that it will hit a dollar this year wathever the news. Looking at really crapy coins they still go up in a bull run. Verge made a name for its self so I think it will surprise a lot of people once again. This is the moment that I have been waiting for :))
I fell sorry for the ones that missed a good entry on price that was flashing when it was around 0.002$
I love low price coins check out flashcoin this is another one I’m waiting to go up again and it most probably will. Entry point was 0.003$ and now I think it’s a good entry point I think it will repeat it old high and go over it . These are just my opinions and I think it’s a good asymmetrical bet.
Good luck to all !

And this announcement is coming surprisingly close to US tax deadline. Its turned out to be a great speculative asset at best.

I have been an advocate for verge for over a year now...no expertise in crypto currency. I just love their work and the community. More days of glory ahead

Complete lack of understanding the whole deal yet vouching for it seems to be the usual for Vergins.

Wow I didn't notice that. Although I have sold a lot of verge in the past few days. I guess if somebody wants to lighten their load then it would be a good idea to get it over with.
I think after tax date of April 17, we have a very good chance of a solid bull run. Better to get rid of what needs to be shed and buy what needs to be bought - this is the time.
Happy trading, cheers!

Stripe have been heavily involved in Stellar providing seed funding at an early stage. Have they signalled they are looking for alternatives?
As far as I know they generally are open to crypto for payment processing, only removing support for bitcoin recently due to the high fees.

I don't know about PayPal but this would be an interesting shift in stance on their part.

You got a 8.26% upvote from @postpromoter courtesy of @lexiconical!