Why vote me as a witness? I believe in steem blockchain and steem community. I think we should try to improve steem blockchain abilities and increase its security.
I believe we can use steem blockchain in many ways and we can create a decentralized world.
With the fast transaction and zero fees, I believe in the near future we will be able to use STEEM and SBD to purchase from markets or transfer funds to everywhere in the world.
Together, we can make this blockchain better, bigger, useful and more secure.
We will learn how to manage spammers, scammers, and abusers to increase the equilibrium in the steem community.
For reaching these purposes, we need more active developers and active witnesses.

Let's explain what is a witness in the steem blockchain:
Please first read FAQ section in the steemit, all steem users should read FAQ and whitepaper.

What are Steem witnesses?
The Steem blockchain requires a set of people to create blocks and uses a consensus mechanism called delegated proof of stake, or DPOS. The community elects 'witnesses' to act as the network's block producers and governance body. There are 20 full-time witnesses, producing a block every 63-second round. A 21st position is shared by backup witnesses, who are scheduled proportionally to the amount of stake-weighted community approval they have. Witnesses are compensated with STEEM Power for each block they create.
Steemit leverages Steem because the founders of Steemit believe Steem’s decentralized text content storage and governance model makes Steem an excellent platform for supporting the long-term success of its social network and digital currency tokens.
Source: FAQ

Also, Thanks to @sumeguy123 for publishing this great article.

What is a witness?
A witness plays a crucial part in how the STEEM network functions. Some people might not be aware of this, but Steemit.com is just a fancy web interface on top of a large network called STEEM, which operates remotely similar to Bitcoin.

Witnesses have many tasks. The first and foremost is to produce blocks (thus process transactions), the second most important is to produce a price feed, which is how STEEM Dollars are always worth 1 US Dollar in STEEM (using the 7 days [update: 3.5 days] exchange).

You may have heard of the term 51% attack before. Unlike Bitcoin, miners don't matter much to the STEEM network, instead, that is a witnesses job:

A hard fork happens when 67% of the top witnesses are all running a certain version of STEEM, which means the top 19 witnesses can pick and choose whether to agree with a fork or not. (e.g. Hard Fork 13 and 14 were both postponed for a week, and re-designed because witnesses refused to update)

Why should I care?
A witness is paid proportionally to how high they are in the witness ranks, excluding the top 19 witnesses (who get 1 block every ~63 seconds).
But how do they get to those ranks? They get voted in, by people like YOU. It's just like an election if you don't vote, other people may vote in witnesses who are malicious or simply unreliable.
Source: Seriously, what is a STEEM witness?

I joined 227 days ago (7-8 months ago) to this great community and started blogging. but, That was not enough for me.
I'm a developer, so I launched some APPs for steem users.
Let's see what I did so far.

All of my developments (main, minor or, requested projects) are free and I will never try to earn money directly from using those developments.
I believe hard work with good work can make things better. At least I will try to make them better.
Let's make steem great.

Support me by voting me as a witness.

Easier way for voting me: Click here
(steemconnect is secure and trustworthy)
or:
Open https://steemit.com/~witnesses, scroll down, type mahdiyari and once click on the vote button. Only once!!! don't click on green button after voting. it will unvote.

I'm a big fan of the services you've created. You deserve to be among the top witnesses, I have no doubt you will be joining them soon. Please take my witness vote :)

Thanks for your support:)

You macke a great job, and develop our community.

already voted for you after trying steemfollower

if steem grow up, the other social medias fell down :)

your stuff deserves to be voted for witness,
you are posting nice stuff.

I support you @mahdiyari for witness

We all make this platform great. In English and also in our mother tongue. I believe that. Thank you for your great blog our witness :D

Why i upvote you as witness because i know you are trusted person and you always work hard to strengthened the steem blockchain.

You are very honest man

Thanks for your support @futuristgear

it seems a good proect.

Easier way for voting me: Click here
(steemconnect is secure and trustworthy)
or:
Open https://steemit.com/~witnesses, scroll down, type mahdiyari and once click on the vote button. 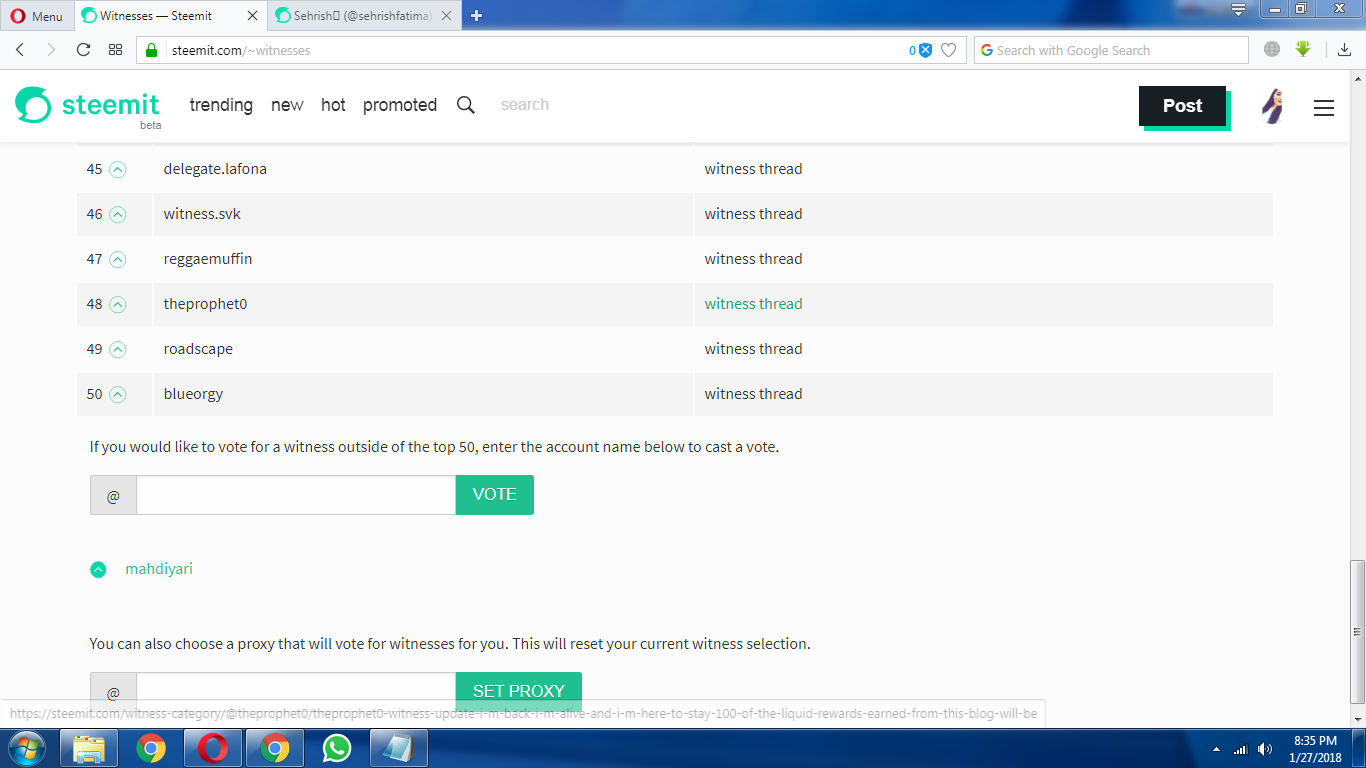 Thanks for Explain i am voting now @mahdiyari

Thanks for Explain i am voting now @mahdiyari

I haven't been here long, but I do have 30 votes. You were the very first I voted for and I think my vote has been very well placed indeed.

Thank you for your service to our community. It is my pleasure to vote for you!

The team at MSP and I literally use that transaction checker every day for basic investigative reasons. It has been an amazingly simple, but also effective tool in our kit.

That's my pleasure.
I will try to improve that tool.

@mahdiyari it's great to see that on Steemit someone is also doing work for newbies and freshies to grow this whole community of Steemit in world and to become a tax-free world!
And already has voted you as a witness bro after seeing these great projects!

Voting Done ! I will tell my friends too about your kindness, thanks again for your generous delegation. It has really helped and I really really appreciate it. Let me know what else I can do to help and pay you back.

Thanks for your support:)

all steem users should read FAQ and whitepaper.

I read FAQ already, but I haven't read whitepaper yet.

Is there an official resource for steemit whitepaper?
I seen only https://github.com/steemit/whitepaper

No, that is just parked on the default name servers of domain registrar.
recently renewed for 1 year.

already voted :)
looking forward to use steemauto when it is back to working, and always use steemfollower since the beginning, now interested in steemclient also, you are a great developer

steemauto working since a few hours ago:)

very nice! I think I find a bug using curation trailing that having delay 1minute seems to skip the vote sometimes, or maybe the delay is just higher than expected, I can't say for sure exactly but either way it is working very good so far, great job ^_^

Hello @mahdiyari , you got my vote for witness.

You're an interesting and handy one. I respect you.

Are the witnesses able to increse the total bandwidth somehow? It seems that it limits a lot of minnows lately.

They can only increase their block size (top 20 witnesses). but that is not good situation to deal with this issue.
Steem developers should feel and fix this problem.

Well, I've read the Whitepaper and increasing blocks is mentioned as a suggestion there. On the other hand, the Whitepaper says that Steem blockchain is designed to power a platform for more users than Reddit has nowadays.

What else may be done? Would better witness' servers help?

I understand.
That is not about witnesses. That is about steem blockchain.
They should change the way of configuring bandwidth between users in the blockchain.
Low bandwidth doesn't mean witness servers are not capable transactions. That means blockchain decided to allocate low bandwidth to the low SP users because high SP users are using blockchain and blockchain traffic is high. That's all.

Thank you for clarifying it. You have my witness vote.

Thank you for what you do. You have my witness vote.

Just followed you and wanted to vote you as wwitness but my password is being rejected, is there any other way to do it without the password?

Thank you for your amazing APP, I love it!!!

Thank you for the future!