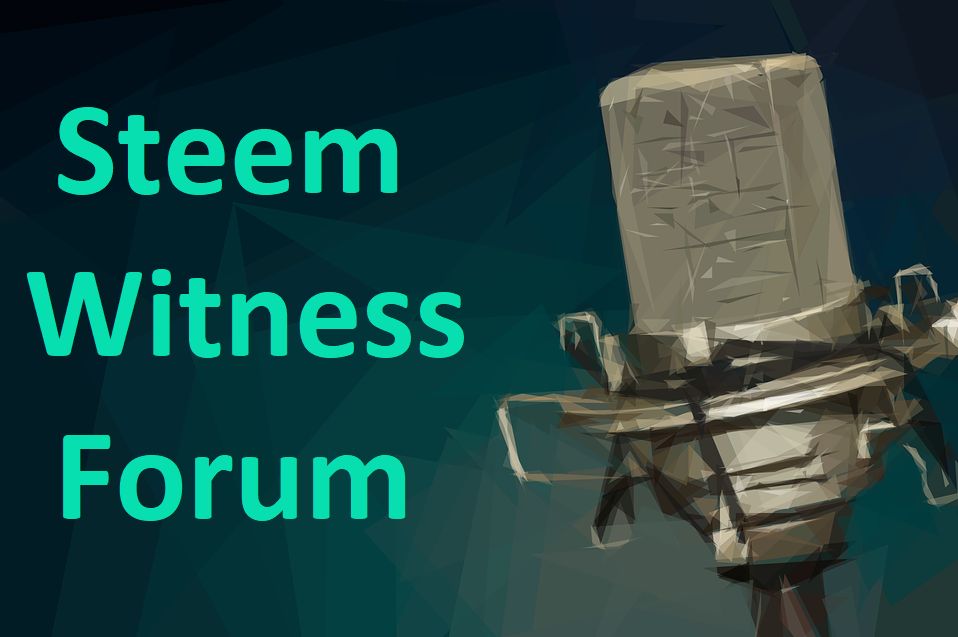 It's my great pleasure to once again announce and host the once monthly Top 20 Steem Witness Forum. I have another all star cast of Witness favorites on the list.

@andrachy from Steemit will kick us off detailing some of the updates from Steemit HQ. They recently put out a pretty big update on progress for a variety of blockchain backbone code improvements. While some of this isn't sexy yet it's absolutely critical blockchain improvements to allow us to expand and meet mainstream adoption. Exciting times lie ahead and I'm stoked to hear about that and other Steemit news and views from their Director of Content! Then it's time to talk to the witnesses!

The all star cast is
@roelandp best known for his work with Steemfest
@timcliff best known for his work on github, and the steem.chat help desk
@aggroed- host of the show, founder of the Minnow Support Project and founder of MSP-Waves a Steem centric radio broadcast featuring Steemix- an around the clock broadcast of Steemian created music- and now home to 30+ radio shows for 60 hours a week of content
@followbtcnews best known for hosting steem.chat, a highly active Minnow Support Project witness, and a variety of tools the public can access that make Steeming better
@lukestokes best known for the exchange transfer report and a steady dedication on the chain to translating tech speak to laymen friendly terms
@anyx best known for cheetah and help keeping spam at bay

Show starts at 11am EST in the Peace, Abundance, and Liberty Discord Channel. I'll spin some hits from the 90s starting around 10:30 while folks gather round.

If you're going to be on air please be sure to have a mic and headset working. The big thing is don't have your speaker sounds heading into your mic because the feedback is terrible. Also, please show up a little early to audio test and make sure you're good to go on air.

I'll talk some more about this during the show, but the alpha release of Steem Monsters is now live. You can find us at steemmonsters.com. You can buy packs for the account you use to pay, see your monsters in the beastiary, and collect duplicates

We're (@yabapmatt and @aggroed) are planning on releasing the ability to trade cards, increase their level by combining cards of the same type, buy packs for others hopefully by the end of June.

We'll have fighting and tournaments ready to go we expect within 3 months. I'm working on putting a kickstarter project together to pull some attention to this from the broader internet community. PALnet doesn't police thoughts, but we do police how people interact with one another. You're welcome to disagree and share any thought that you want regarding plans and policies of the witnesses, steemit, and the other audience members, but we don't have a lot of tolerance for people that can't disagree politely. Ask questions, share thoughts, point to facts and evidence, but please be respectful especially while heated and especially while sharing a different opinion!

Looking forward to having you there this Saturday!

Should be fun, should be lots of news to share, should be cool projects to talk about, and I'm excited to hear what's going on!

I would be very appreciative if I could get one of you top witnesses to do an interview with me about the witness system, the importance of voting for witnesses, and to talk about what witnesses should be supported with voting and why.

Let me know if any of you are interested. There is a lot of confusion in the noobs about this, I can explain it myself, but I would prefer to have one of you join me to discuss it in the near future. Hit me back.

I'd be happy to do that with you titus. Can you hit me up in Discord (minnowpond.org)

would like to see a show introducing witnesses who arent in the top 20 and are up and coming. people like arcange, danielsaori, patrice, markymark, rhondak, and yaba who do interesting things on the platform. we tend to hear from the same people as witnesses. would be refreshing to get some variety.

I rotate in backup witnesses. There are new folks. Steemit ramble does a no holds barred witness discussion. This has a different purpose than that.

the witnesses have a great responsibility

I will not miss this opportunity to share the same room with witnesses in discussing steemit business.

Posts are useful to us in plankton caste, thank you for sharing. Warm greetings from a height of 1300 meters.

mtGox used to be a trading card site ... they stole my one bitcoin, which wasnt a lot when gpu mining was an option, but over the years by now ...

Wow, this is like a blockbuster having all the major character up in one movie. 20 witnesses, wouldn't miss this show for anything. Saturday it is

Having all these great guys together in just one show? It's surely going to be great

I LOVE your logo. Who designed it for you???

You got a 30.06% upvote from @postpromoter courtesy of @aggroed!

Congratulations to all the witness, all the best in your endeavors, better days ahead

would there be an option to look into the votes being held by dead witnesses and maybe find a way to return these to the voter if a witness is not active for X amount of time?
Some of these are seemingly still assigned blocks and this has a few disadvantages:
If they are listed in the top 50 they are voted on by new users that have no idea a witness is no longer active
does assigning non active blocks not cause potential delays in handing them over?
These votes would then be able to be re assigned to new projects that can all use a bit more support.

I am part of a new team that started @swisswitness a while back and I have found this a big topic among other witnesses I have spoken to.

Oh man! I will be the announcer at my kids' swim meet this Saturday. I am bummed to miss this. Will you record the show?

yep. All the forums are recorded.

can u upvote me pls https://steemit.com/teardrops/@icristina/my-illustration-teardrops-surpassinggoogle-lost-eyes