90 percent of the world's victims of air pollution 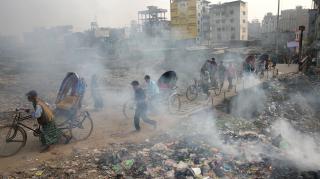 The level of air pollution reached the horizons in the world. 90 percent of the world's population is forced to take contaminated air. Due to this, 70 lakh people die from various diseases per year due to pollution.

The World Health Organization (WHO) has given the horror of air pollution in a report published on Wednesday.

WHO Director General Teredros Adhmanum Grayius said, "Aerobics has created a threat to all of us. But poor and marginal people are the biggest victims. "He said 300 million people in the world are getting smoke from air pollutant cooking oven or other fuel daily. Most of these people are women and children

everybody need fresh air and refresh their mind alltime but now a days basically city people cannot get fresh air because air pollution. and this pollution create by them.

right comment. People are responsible for the air pollution, so we have to be aware that to prevent air pollution

Air pollution is certainly a harmful