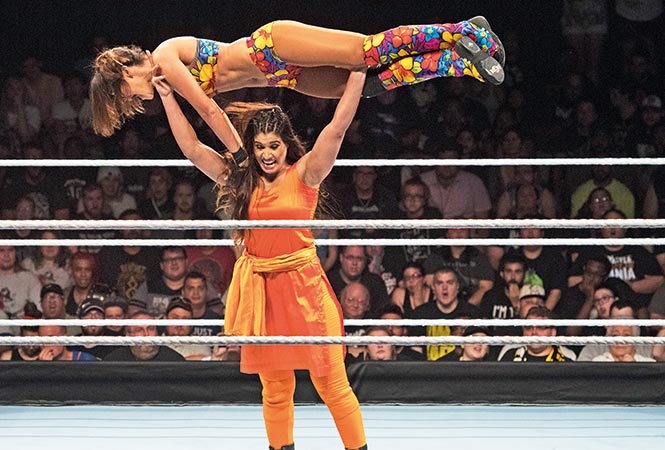 Kavita Devi is the first ever Indian female wrestler to represent India in WWE’s first ever women tournament Mae Young Classic.
Kavita Devi is making waves at the World Wrestling Entertainment (WWE): She became a sensation when a video of her lifting a female wrestler in the ring while wearing a saffron salwar-kameez with a dupatta tied around her waist went viral.
Devi eventually lost the match to New Zealand's Dakota Kai in the first round of the WWE Mae Young Classic 2017 event, which was held in July, but she became a sensation online.
Devi, who hails from Haryana, was a constable with the Sashastra Seema Bal. She is a former powerlifter and MMA fighter, and has won gold medals at global events including the 2016 South Asian Games.
The Great Khali trained Devi at his Punjab-based wrestling promotion and training academy, Continental Wrestling Entertainment (CWE). She started as a pro-wrestler under the ring name Hard KD. She made her CWE debut wearing salwar-kameez.
Devi created history when she became the first Indian woman to participate in the WWE. She was selected along with 31 other female contestants from around the world in the first-ever Mae Young Classic.
Youtube video here